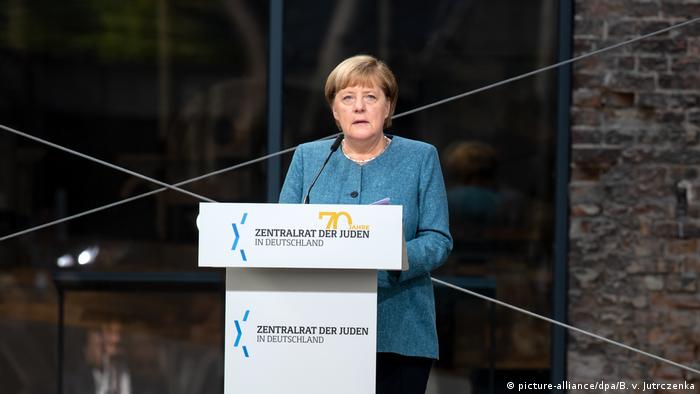 Delivering a keynote address in a ceremony commemorating the 70th anniversary of the Central Council of Jews in Germany, Chancellor Angela Merkel on Tuesday said that many German Jews still do not feel safe and that anti-Semitism in Germany "never disappeared."

"Many Jews do not feel safe, do not feel respected in our country. This is one part of today's reality and it is one that causes me grave concern," Merkel said at the ceremony in Berlin.

The chancellor called it a "shame" that racism and anti-Semitism "never disappeared" in Germany, stressing that more recently such worldviews seem to be "more visible and without restriction."

"That is something we must never accept in silence," she said to applause.

Merkel recalled the deadly attack last year on a synagogue in the German city of Halle as an example of "how quickly words can become deeds."

"Group related hostility against people is something we must fight," the chancellor said.

She added that the rule of law was an important tool to be used to this end, citing measures the German government took to fight anti-Semitism over the past year, including the establishment of a new cabinet committee focused on this issue.

"Anti-Semitism is an attack on people, humanity, against being a human being, because its directed against the dignity of individual people," she said.

Nazi ideas have 'not disappeared'

Speaking ahead of Merkel, Council President Josef Schuster also denounced the increasing prominence of anti-Semitic sentiment, including an increase in conspiracy theories and crimes targeting Jews.

"The Nazis' ideas have still not disappeared," he said.

The Central Council of Jews in Germany was formed in Frankfurt in 1950, initially to represent Jewish survivors of the Holocaust who were considering exile or moving to newly-founded Israel. The council represented some 15,000 Jews located in the post-war American, French, British and Soviet occupation zones as well as exiles contemplating returns to Germany.

"Where did people get the courage and optimism to start all over again?" he said.

Its founders deserved respect for their role planting the seed for Jewish life in Germany, Schuster said, saying that they were moved to show "great trust" in Germany because they felt tied to the country.