Anti-Semitism in Germany increased due to coronavirus protests

Jewish groups and police alike have been worried about growing anti-Semitism during large demonstrations in Berlin. Some protesters have used far-right imagery and compared themselves to Holocaust victims. 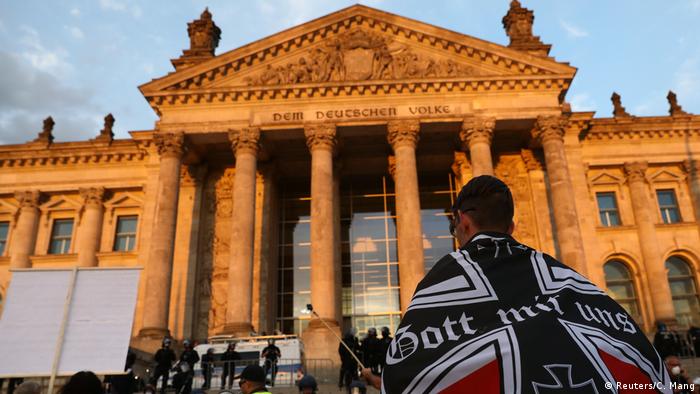 The Central Council of Jews in Germany has warned of increased anti-Semitism due to the protests against coronavirus measures.

"If, for example, the Rothschilds are blamed for the pandemic, then this is a synonym for Jews," said Shuster.

He added that not everyone who protested in Berlin in August was anti-Semitic or racist, "but they walked among them."

Two recent protests have drawn tens of thousands from across the country to Berlin. The demonstrations were mainly peaceful, but at one point, hundreds of demonstrators broke through a blockade in an attempt to storm the Reichstag building.

The police trade union, the GdP, said it has also seen a rise in radicalization of protesters against coronavirus protective measures.

"Since the first demonstrations, right-wing groups have influenced the corona protest movement," GdP vice-chairman Jörg Radek told newspapers of the Funke Media Group. "The right-wingers are there and are about to completely take over the movement."

Some protesters have used signs and flags associated with far-right politics, from the Reichskriegsflagge (Imperial War Flag) to costumes comparing themselves to Holocaust victims.

"Nobody can say they are just a follower now. Anyone who stays with the movement must ask themselves whether they want to join forces with right-wing extremists and combine personal concerns in the coronavirus crisis with the extremists' anti-democratic goals," said Radek.

Images of protesters storming the Reichstag building in Berlin, prompted outrage in Germany. This has fuelled a debate on whether anti-coronavirus demonstrations should be banned in general.

Opponents of public health measures failed to storm the Reichstag. However, nationalists' efforts to build coalitions with pandemic deniers should not be underestimated in the long term, DW's Hans Pfeifer writes.