The German government has described "shameful scenes" at the Reichstag after far-right protesters caused chaos on its steps. The German president has warned citizens against apathy towards right-wing extremism. 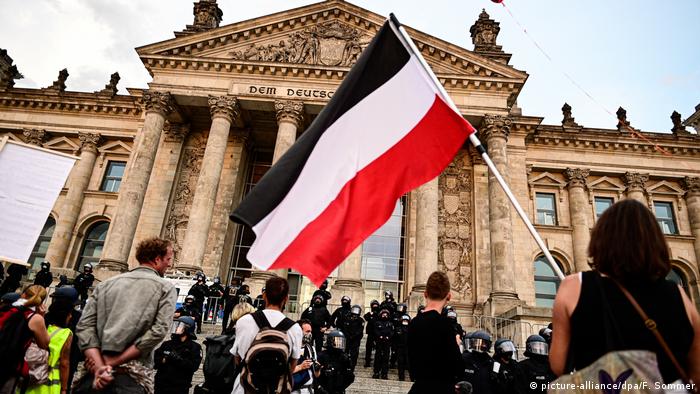 The German government on Monday criticized right-wing protesters who over the weekend rushed the steps of the Reichstag building, where the lower house of Germany's parliament convenes.

German Chancellor Angela Merkel's spokesman Steffen Seibert described "shameful scenes at the Reischstag," saying those who fanned out on the steps of the building were "anti-democrats."

The protesters had formed part of a Berlin demonstration against public restrictions on gathering and mobility aimed at curbing the spread of the novel coronavirus. Some of them brandished images of the so-called Reichsbürger movement, which rejects the legitimacy of the modern German state.

The incident drew comparisons to the fire that engulfed the Reichstag in 1933, just four weeks after Nazi leader Adolf Hitler was named German chancellor. The fire was used as a pretext to target communists and consolidate power, giving rise to Nazi Germany.

"The scenes of this weekend's demonstration should not obscure the fact that the vast majority of people in Germany think and act differently than the demonstrators in Berlin," said Seibert. "That is why Germany has made it through the pandemic so far."

On Monday, German President Frank-Walter Steinmeier said the fact that the incident took place at the Reichstag made it even more so "unbearable." He urged German citizens to do their part to reject far-right ideologies.

"We will not tolerate any anti-democratic vilification of the Federal Republic of Germany," said Steinmeier, whose presidential role is largely ceremonial. "The violent riots on Saturday again made clear that right-wing extremism has deep roots in our society."

"My understanding ends where demonstrators allow themselves to be harnessed to the carts of the enemies of democracy and the political agitators, those who seek cooperation with right-wing extremists on the street, but also those who simply walk — without being concerned — alongside neo-Nazis, xenophobes and anti-Semites. Those who don't clearly and actively separate themselves from them, make common cause with them."

"We don't want to see anymore protesters with Reichsflaggen, flags of the imperial Germany, stood in front of Parliament," he told DW, referencing the black-white-red stripped flags waved by some protesters.

Sensburg, who heads the parliamentary Election Oversight Committee, emphasized that the group involved in the incident at the Reichstag were "a very, very small group" who use violence to promote their ideology.

Since the 2015 migration crisis, Germany has witnessed an increase in far-right activity. Earlier this year, investigators discovered that former law enforcement officials were behind a series of threatening letters from the "National Socialist Underground 2.0," a revised neo-Nazi moniker.

German politicians and delegates from across the country reelected Frank-Walter Steinmeier to the largely ceremonial role of head of state.

He loves jazz, appreciates art and is well-read — German President Frank-Walter Steinmeier is looking at a second term in office.