Thousands turn out in Berlin to protest coronavirus measures

Berlin authorities estimate that some 30,000 people attended the latest coronavirus skeptic demo. While most of the day was peaceful, hundreds of people attempted to storm the Reichstag parliament building. 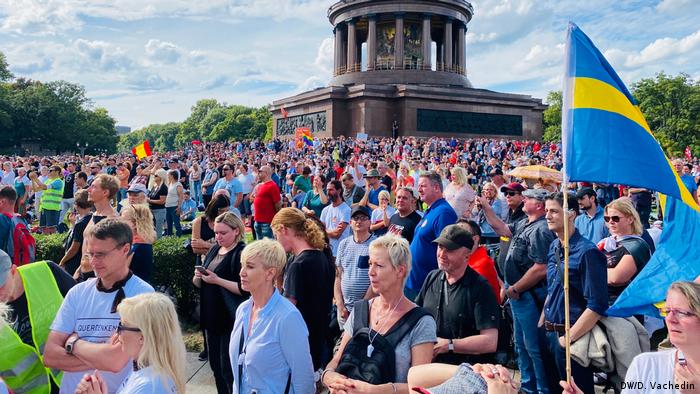 It's late Saturday afternoon behind the Brandenburg Gate in central Berlin. On the street children chalk pictures of flowers and hearts on the ground next to the words, "Humanity, Love, Freedom." Families saunter by, some with entire picnics packed into hand carts, as they make their way to Berlin's Victory Column, keen to find a good spot for their camping chairs.

"Where have you traveled from?" one mother asks another as they set up camp. "Straight from Hamburg," she replies, pointing to her flag: a white castle against a red backdrop. She isn't the only one who's traveled to Berlin today. Other state flags fluttering around suggest that people have traveled from far and wide.

Read more: Opinion: A coronavirus fiasco with one ray of hope

With some unidentifiable German pop music playing in the background, the feeling at the afternoon rally is reminiscent of a town festival, but a closer look at the T-shirts emblazoned with slogans suggests otherwise. Out the back of a hire truck, one man is closing a sale with an elderly, white-haired woman with a walking stick. 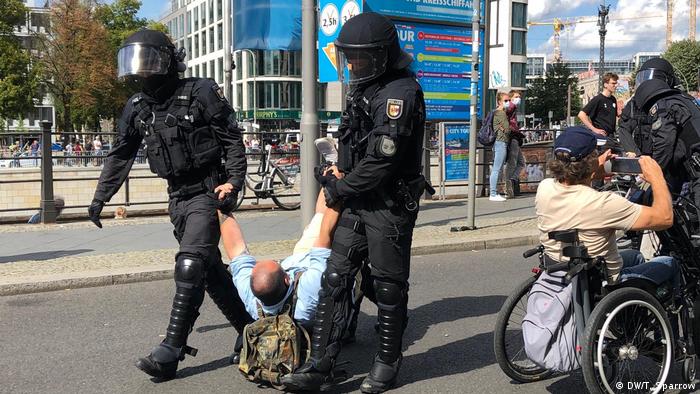 "That'll be €5 ($5.95)," he says, handing her a red T-shirt with the word "Querdenken" across the chest. These are the self-proclaimed "lateral thinkers" — the organizers behind the demonstration against the German government's measures to tackle the coronavirus pandemic.

According to the Stuttgart-based group, some 20 Articles of the German Constitution are being violated by the restrictions imposed to tackle coronavirus. They want these to be lifted.

Other T-shirts shed light on the ideology of the wide mix of people who have attached themselves to the COVID-skeptic movement in recent weeks — for the large part a mixture of coronavirus doubters, conspiracy theorists and anti-vaxxers.

Particularly popular is the motto of conspiracy theorist Heiko Schrang — "realize, wake up, change" — or slogans like "Don't give Bill Gates a chance," "End the muzzle!" or "No compulsory vaccinations!"

Like at previous "anti-corona measures" demos, members of Germany's far-right scene were also present, many of them visible with the flags of the German Empire and The Kingdom of Prussia. Both have become synonymous with the Reichsbürger movement that denies the legitimacy of the modern German state. Others waved placards affiliated with the far-right conspiracy theory QAnon.

The participation of far-right extremists has drawn huge criticism from German politicians in recent weeks and prompted several counter demonstrations on Saturday. On Bebelplatz, the site of the Nazi book burning in 1933, protesters chanted," You're marching alongside Nazis."

Freedom of opinion and the far-right

Back at the coronavirus skeptics' demonstration, one protester carrying a Swedish flag in support of the country's response to coronavirus said it was the media's job to "report the truth that not all the protesters at the demo are far-right extremists."

"They're the minority," he said. "I'm a father. I just don't think the coronavirus measures are appropriate."

Asked if she found it problematic to walk alongside known neo-Nazis, one woman who said she was there to spread a message of "humanity and love" wasn't perturbed by their presence. "Everyone has their right to express their views, even if it's not one that I share," she said.

While talking to protesters on Saturday, DW was repeatedly targeted with chants of "Lügenpresse!" (Lying press) — a phrase that has also become popular with far-right populists. Other protesters took to the new trend of incessantly photographing and filming journalists, regardless of whether they're broadcasting, talking to protesters, or discussing where to grab a sandwich.

Whether Saturday's coronavirus skeptics' protests would even take place came down to the wire this week, after Berlin authorities initially banned the protest on the grounds of lack of willingness to follow coronavirus measures at a previous mass demo on August 1.

Berlin Interior Minister Andreas Geisel went on to add that Berlin would not allow itself to be misused for a second time as a backdrop for "coronavirus deniers, Reichsbürger and right-wing extremists" — fueling a political debate over whether he gifted protesters an extra line of argument to add to their appeal of the ban. On Friday, the ban was indeed overthrown by Berlin's administrative court, and reconfirmed on Saturday after an appeal by police.

It took just two hours on Saturday, however, before the demonstration was asked to disperse after failing to maintain social distancing — a requirement of the court ruling. Riot police quickly upped their presence, their arrival prompting chants of "Join with us!" Other demonstrators hijacked the chants used in the pro-democracy movement in former East Germany: "We are the people!"

The planned march never began. While most demonstrators moved peacefully towards the Brandenburg Gate and the Victory Column for the afternoon rally, officers were seen dragging or pushing people, young and old, who were refusing to disperse. 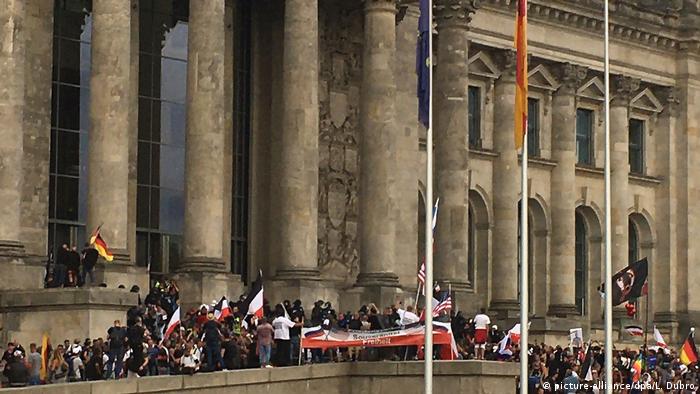 Protesters jumped barriers and attempted to storm the Reichstag

Shortly after 7 p.m. (1700 UTC), the situation looked to escalate again after hundreds of people, many seen wearing the colors and flags associated with the far-right Reichsbürger, attempted to storm Germany's parliament building, the Reichstag. Police say the situation was quickly brought under control. But the hum of police helicopters was heard over Berlin late into the evening.