Hundreds were arrested in Berlin after opponents of coronavirus restrictions marched through the city and defied the police orders to disperse. Authorities said the protesters violated court orders on health and safety. 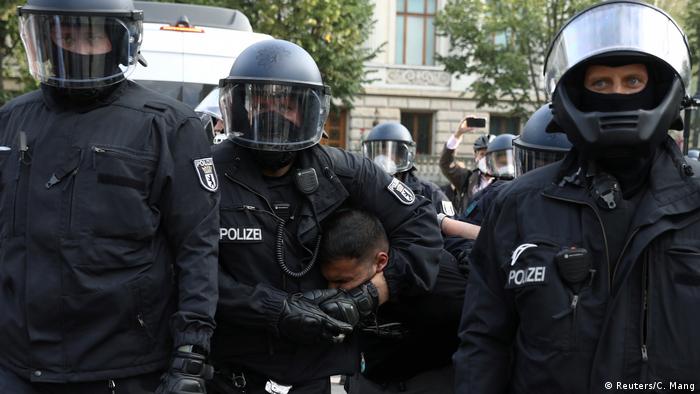 Police in Berlin announced Saturday that they were cutting short a demonstration against coronavirus restrictions in Germany, saying that protesters had failed to abide by court-ordered guidelines.

Officials estimated some 38,000 protesters took part in the rally on Saturday, a day after a court overturned the capital's ban on the protest.

Attempt to storm the Reichstag

While the rally started out peaceful, clashes were reported at multiple points, including a group of protesters breaking through a fence in front of the parliament building and rushing the stairs leading up to the Reichstag entrance. Many of them were seen wearing colors and flags of the anti-state Reichsbürger movement (Citizens of the Reich). Police used pepper spray and managed to push the group back.

"Everyone has the right to argue about how to deal with [the coronavirus] and of course to demonstrate for your opinion," Maas said, adding: "NOBODY should follow around right-wing extremists, endanger police officers and expose many to the risk of infection."

He also said the appearance of "Reich flags" outside of the German parliament was "shameful." Although they do not openly display Nazi symbols, the black-white-red striped flags invoke the Nazi era.

Out of the 300 arrests, at least 200 of them took place during a section of the protest in front of the Russian Embassy where some 3,000 right-wing extremists and Reichsbürger members gathered.

Berlin police tweeted that the arrests were made due to protesters "throwing bottles, freeing people under arrest and other crimes." They added that conspiracy theorist, vegan cookbook author and self-declared member of the "ultra-right" Attila Hildmann was among those arrested.

'We are the people'

Police had previously criticized participants for ignoring repeated instructions to follow social distancing measures, warning on Twitter that the march would not be allowed to start if demonstrators did not keep a safe distance from each other.

The crowd had initially gathered around the Brandenburg Gate on Saturday morning, news agency dpa reported. Demonstrators shouted "Open the gate" and "We are the people," echoing chants used in the pro-democracy movement in former East Germany.

"There is a wide variety of people here," DW's Thomas Sparrow said, reporting live from the scene. "You have people here against vaccines, you have people that are conspiracy theorists. You have families saying they just want to have the right to protest."

"This is a protest that has been co-opted, to a large extent, by the far right. Although some people have told us that is not the case."

He later posted pictures and a video showing police dragging away participants who had refused to leave the area.

Demonstration organizer "Querdenken 711" (Lateral Thinking 711)registered for over 22,500 people to attend. Some 3,000 police officers were deployed Saturday morning to control the crowds.

Previous "anti-corona" marches in Germany have attracted support from people across the political spectrum, including those from the far-left and far-right as well as anti-vaccination campaigners and conspiracy theorists.

There are also several counter-demonstrations happening across Berlin. Counter-protesters were chanting "You’re marching alongside Nazis," a reference to the fact that the march includes far-right extremists.

An administrative court in Berlin on Saturday morning ruled that the demonstration could go ahead, overturning an earlier decision from a lower court banning the protest.

The city had announced the ban earlier this week, citing the lack of health precautions taken by protesters at a similar demonstration earlier this month.

The new ruling required organizers and participants to meet certain conditions, and gave police the right to shut down the event if the norms are not being observed. Barriers were required in place in front of stages where speeches are held and event coordinators were told to regularly remind those in attendance to keep a safe distance from each other. The judge did not include wearing masks in the guidelines.