Thousands of corona skeptics are descending on the German capital after a court reversed a police ban on their protest. Concerns about security and a lack of social distancing were rejected by judges. 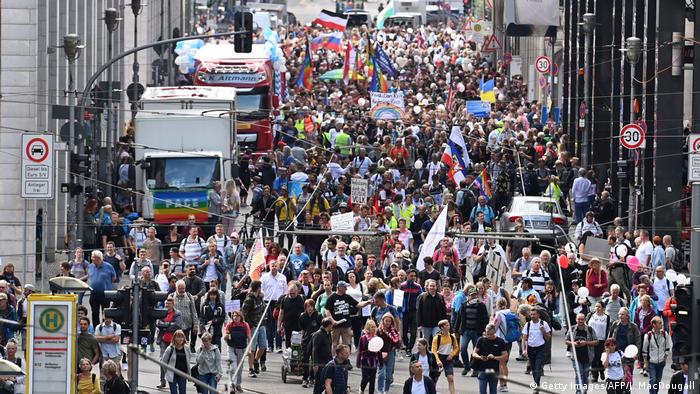 A protest against coronavirus restrictions is set to take place in the German capital on Saturday, after an administrative court in Berlin overturned a ban on the demonstration.

A court spokesman said on Friday that the protest, which is expected to draw over 22,500 people, will be allowed to go ahead under certain conditions.

Shortly after the decision, Berlin police appealed at the city's Higher Administrative Court for review. In the night to Saturday, that court ruled the demonstrations could go ahead.

Some protesters had been calling for demonstrators to travel to Berlin over the weekend, regardless of whether the demonstrations were permitted.

In its decision, the court said the protest organizers had taken "sufficient precautions" for Saturday's demonstration, including providing one hundred de-escalation teams.

The court added that there was no evidence in the organizer's demonstration application that would suggest that they would "deliberately disregard" social distancing requirements.

The judges further criticized city administrators for not sufficiently examining alternatives to banning the event, such as limiting the number of participants or changing the location.

Still, the judges said protest organizers and participants must provide barriers in front of the stages where speeches will be held — and must regularly remind participants to observe social distancing rules and keep their distance.

Wearing masks was not included in the judge's guidelines for the protest.

A similar protest earlier this month that was set up by the same organizers (a scene from which is pictured at the top of this story) had to be broken up after thousands of participants did not wear masks or social distance from others.

There were also concerns about potential conflicts between counterprotesters and right-wing extremists and conspiracy theorists within the anti-coronavirus restriction movement.

Berlin police are now working to prepare for possible clashes during the protests. In recent days, some opponents of coronavirus restrictions have been calling on social media followers across Europe to join them in Berlin, a few even advocated violence.

"This openly expressed willingness to use violence against authorities is a new dimension for us," Berlin police Vice President Marco Langner told a news conference.

Some 3,000 officers would be patrolling the streets, including reinforcements from other parts of Germany, and water cannons would be used if necessary, police said.

Berlin police chief Barbara Slowik emphasized that not all the participants were extremists, but that many had likely not been socially distancing.

"These are people who are opposed to [coronavirus containment measures], so we assume they have exercised absolutely no caution in recent months," Slowik said, adding that authorities would end the event "very swiftly" if hygiene measures were not being adhered to.

'Those who call for violence are not with us'

The court's decision was celebrated as a victory by the organizers of Saturday's protest, the Stuttgart-based initiative Querdenken 711 (Lateral Thinking 711).

"This is a success for our basic rights," Michael Ballweg of the Querdenken initiative said in a YouTube video.

He called for peaceful protests and said "those who call for violence are not with us."

Others online voiced doubt about whether the many, varied groups that are planning on participating in the protests will adhere to the guidelines set out by the court.

"I trust that the people who yesterday still wanted to storm the city with weapons in order to demonstrate against the security rules will now adhere to the security rules," comedian Shahak Shapira wrote sarcastically on Twitter.

Former Green party politician Volker Beck noted on Twitter that the decision puts police in an even more difficult position — having to review the court's guidelines and intervene if protesters don't adhere to the rules.

On the Berlin city government's decision to ban the protests in the first place, Beck wrote: "The bazooka is not always the best weapon of choice."