Politicians have hit out at extremists and corona-skeptics who attempted to enter Germany's parliament building after police shut down their demonstration. Hundreds of people were arrested. 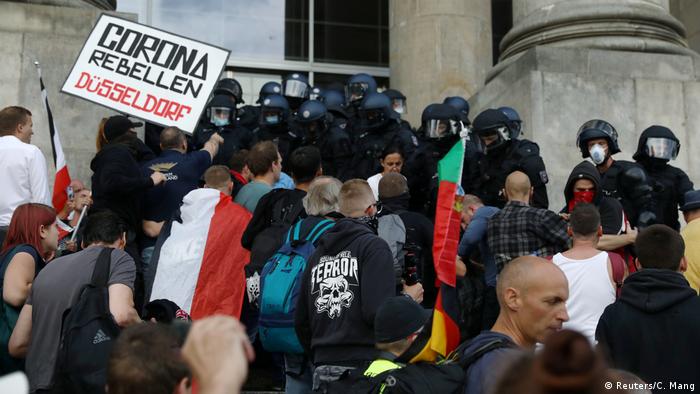 German politicians on Sunday said they were outraged after several hundred people attempted to break into the Reichstag — the federal parliament building in Berlin — as part of a vast protest against the country's coronavirus restrictions.

President Frank-Walter Steinmeier described the incident as an "unbearable attack on the heart of our democracy."

On Saturday evening, hundreds of people tried to force their way into the building and were able to break through a security barrier and run up the stairs before being stopped by police.

Many of those involved sported clothing and flags associated with the far-right Reichsbürger movement, which denies the legitimacy of the modern German state.

Steinmeier labeled the trespassers a "right-wing extremist rabble," before paying tribute to security forces who he said had "acted extremely prudently in a difficult situation."

The incident took place after an estimated 38,000 people gathered in the German capital on Saturday to protest against the country's coronavirus policies.

After about two hours, police called off the protest, citing the disregarding of social distancing rules.

Reacting to the incident, Interior Minister Horst Seehofer told the newspaper Bild am Sonntag that: "The Reichstag building is the seat of our Parliament and thus the symbolic center of our liberal democracy."

"The fact that sowers of chaos and extremists are abusing it for their own purposes is unacceptable."

Read more:Opinion: A coronavirus fiasco with one ray of hope

Nazi symbols 'have no place' near Parliament

Foreign Minister Heiko Maas tweeted: "It is shameful to have flags of the German Reich in front of Parliament."

"Nazi symbols and flags of the Reichsbürgers and of Imperial Germany have no place in the German Bundestag," wrote Finance Minister Olaf Scholz.

"Participants in a demonstration that the AfD and NPD also helped mobilize tried to storm the Reichstag," parliamentarian for Germany's Green party Konstantin von Notz said, referring to two far-right parties in Germany.

"It is just disgusting and shameful," the politician said.

Video of the event posted online showed a crowd of people standing outside the door of the Reichstag, where only three police officers blocked their entry.

Police were able to drive the crowd back with pepper spray and deescalate the situation. They then cleared the square in front of the Reichstag.

"We can't be everywhere all the time," Thilo Cablitz, a spokesman for the Berlin police, said. "This exact gap was sought out in an attempt to get around the barricade, to break through, and to get onto the steps of the Reichstag."

Authorities arrested around 300 people, according to Berlin state's Interior Minister Andreas Geisel.  Around 200 of those were detained in front of the Russian embassy, where a crowd of some 3,000 Reichsbürger supporters and far-right extremists threw stones and bottles at police.

United against a 'common enemy'

Secretary-General of the SPD Lars Klingbeil said he was surprised that Germany's domestic intelligence service had not received advanced warnings "that right-wing extremists were trying to infiltrate this demonstration."

"We will have to take a closer look at why these warnings were apparently not available in advance or were not properly evaluated," said the SPD politician said on the television show "BILD Live."

The Bundestag's advisory committee will now clarify "what security concepts looked like."

Speaking with DW, author and Internet activist Katharina Nocun said the diversity of the groups that participated in Saturday's demonstration is concerning.

"It is really hard to tell what this demonstration was really about because the organizers don't distance themselves from esoteric groups, from conspiracy theorists, from the far-right," she said. "They say, 'We have one common enemy, which is the government.'"