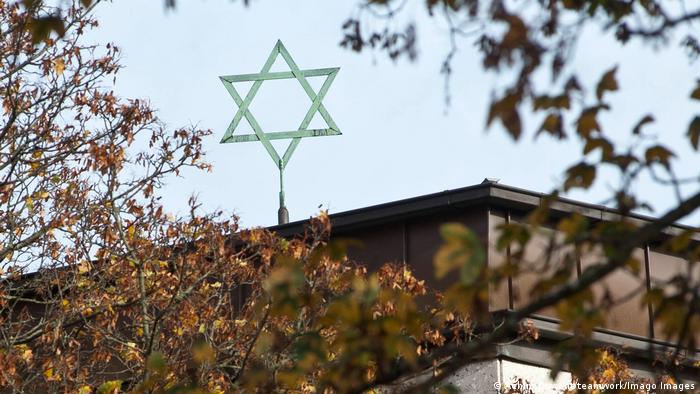 A man attacked a Jewish citizen outside the Hohe Weide synagogue in Hamburg on Sunday, according to police.

The man swung a foldable shovel, injuring a 26-year-old before the synagogue's security personnel were able to restrain him. He was later taken into custody by Hamburg police. Germany's DPA news agency reported the 29-year-old suspect was carrying a piece of paper with a swastika in his pocket.

The victim, reported to be a Jewish student, suffered serious injuries to the head and was admitted to a local hospital for treatment, according to the daily Süddeutsche Zeitung. His injuries are serious though not life-threatening.

Police said the attacker, a German with Kazakh roots, was accused of causing grievous bodily harm and appeared to be acting alone. A police spokesperson said the motive for the attack was still under investigation and that the suspect was "extremely confused" leaving investigators unable immediately to question him.

Members of the city's Jewish community were at the synagogue celebrating Sukkoth.

'Why does this keep happening?'

"This is not an isolated incident, this is disgusting anti-Semitism and we must all oppose it!" Maas wrote in a tweet.

"As we mark the one-year anniversary of the Yom Kippur attack in Halle, Germany, which left two dead, I am saddened to learn that once again, this time on the Jewish holiday of Sukkot, a German Jewish community is confronting a violent, antisemitic act of terror," World Jewish Congress President Ronald S. Lauder said in a statement. Police arrived on the scene soon after the attack

“We must ask ourselves, and German local and national authorities must address the question – why does this keep happening? Why is anti-Semitism thriving, and why does anyone believe there is room for such hate?" Lauder added. "Our young people must not learn from those who hate. The German government must take responsibility in strengthening education so that the next generation understands that hatred of any kind is never permissible. The long-term viability of Jewish life in Germany depends on it."

The German Orthodox Rabbinical Conference (ORD) has described the attack as "another shock to the Jewish community in Germany."

"It is unbearable to see hatred and violence against Jews erupt again and again on German streets, and this comes during the holiest Jewish holidays and one year after the terrible attack in Halle," said ORD chairman Avichai Apel on Sunday.

Apel added "Jewish life as a whole must be better protected in this country," and demanded that German society "take even more decisive action against hate and incitement on the internet, against right-wing extremist agitators, against the Neo Nazi scene and crude conspiracy theorists, and do more for prevention, education and the promotion of civic courage."

Nearly one year since Halle attack

The attack in Hamburg came ahead of the one-year anniversary of a deadly Yom Kippur synagogue attack in the eastern German city of Halle. In that attack, a man armed with a gun attempted to break down a door to a synagogue as worshipers gathered for the holiest day in the Jewish calendar. Though he was not able to enter the synagogue, two people were shot dead and others were injured.

Germany has recently seen an increase in anti-Semitic crimes, leading Chancellor Angela Merkel to declare some Jews do not feel safe in Germany.