The Dutch Protestant Church admitted to doing too little to help Jews during World War II. The acknowledgement came as Amsterdam commemorated the anniversary of Kristallnacht, or the "Night of Broken Glass." 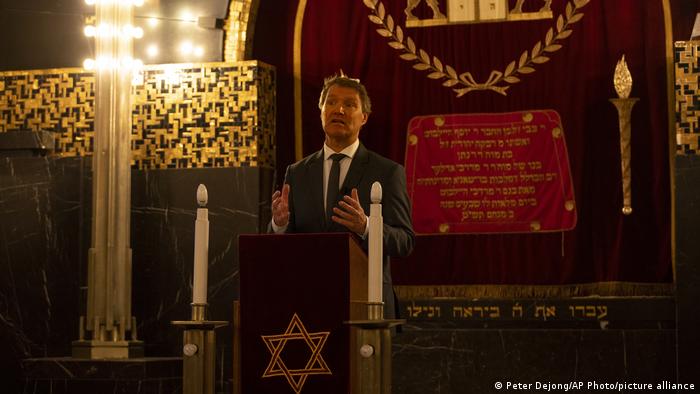 The Protestant Church of the Netherlands (PKN) made a far-reaching recognition of guilt on Sunday for its failure to do more for Jews during World War II.

PKN chairman Rene de Reuver said the church's role began long before Adolf Hitler came to power in Germany. He said the PKN now recognizes that the church "laid the ground under which anti-Semitism and hatred could flourish."

"The church recognizes faults and feels a present responsibility," he said. "Anti-Semitism is a sin against God and against people. The Protestant Church is also part of this sinful history.

De Reuver promised that the Protestant church would work to fight anti-Semitism going forward. "We undertake to do everything possible to further develop Judeo-Christian relations into a deep friendship of two equal partners, united among others in the fight against contemporary anti-Semitism."

The long-awaited, historic statement came at a solemn ceremony in Amsterdam for Monday's anniversary of the Nazi's anti-Jew Kristallnacht pogrom, also known as the "Night of Broken Glass."

On November 9, 1938, Jews were terrorized throughout Germany and Austria. At least 91 people were killed and up to 30,000 Jewish men were arrested. Hundreds of synagogues were burned down and around 7,500 Jewish business were vandalized.

The Netherlands was occupied by Germany in May 1940, after which around 140,000 Jews, or three-quarters of all Jews living in the country, were murdered.