The two-state scenario of Palestinians living alongside Israel remains the "only sensible alternative," Chancellor Angela Merkel has told Mahmoud Abbas in Berlin. The Palestinian president is also due to visit Brussels. 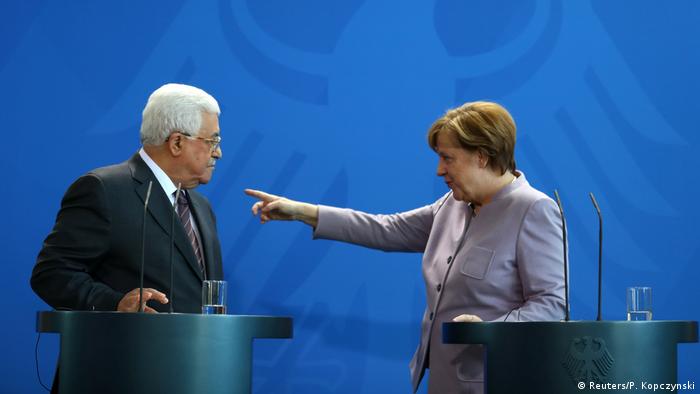 Merkel indirectly warned Israel on Friday that its expansion of Jewish settlements in the West Bank would lead to "erosion of the two-state solution," that would also put Israel's future at risk.

"I still do not see a reasonable alternative to the goal of a two-state solution," Merkel said in an apparent reference to US President Donald Trump's suggestion last month that a Palestinian state alongside Israel was not the only solution.

Abbas, speaking alongside Merkel at a Berlin press conference, thanked Germany for what he termed German political and material support provided to improve Palestinian institutional structures.

Israel's ambassador to Germany, Yakov Hadas-Handelsmann, told Germany's "Nordwest-Zeitung" newspaper on Friday that Israel was not against the two-state solution but insisted that Palestinians return to the negotiating table, without pre-conditions.

Peace efforts lead by the former Obama's administration's secretary of state John Kerry collapsed in 2014. One of Trump's top advisers, Jason Greenblatt, visited Israel and the Palestinian territories last week for talks on both sides as Trump issued an invitation to Abbas.

Israel has continued to build settlements in the occupied West Bank - seized by Israel in a 1967 war - and where Palestinians want to establish their state.

On Wednesday, Israel's Central Bureau of Statistics published figures, showing that ground was broken on 2,630 housing units last year compared with 1,884 in 2015.

"On 60 percent of our territory we cannot move freely," Abbas said. "We can't even move a stone or plant a tree on these grounds." 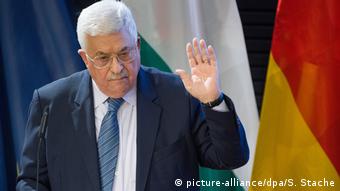 Roderich Kiesewetter of Merkel's conservative Christian Democrats (CDU) urged Abbas, who next Sunday will turn 82, to find a successor.

Otherwise a dangerous vacuum could result, said Kiesewetter, who is a leading conservative in the German parliament's foreign affairs committee.

Before meeting Abbas on Friday, Merkel warned Palestinians that if they wanted peace it was wrong to condemn Israel within international bodies.

Earlier this week, UN chief Antonio Guterres had ordered the removal from a UN website of a report that had accused Israel of establishing an "apartheid regime" that dominated Palestinians.

UN undersecretary Rima Khalaf resigned last Friday after resisting Guterres' request to remove the document, which had drawn US condemnation.

Guterres' spokesman, Stephane Dujarric, claimed it had been published without consultation with the UN secretariat.

Guterres is due to travel to Jordan next week to attend an Arab summit and hold bilateral meetings expected to focus on the wars in Syria, Yemen, Libya and the Israel-Palestinian conflict.