Trump has spoke with the leader of Palestine about reviving peace talks with Israel. An invitation for Mahmoud Abbas to visit Washington suggests a shift in Trump's previous position on the Israeli-Palestinian conflict. 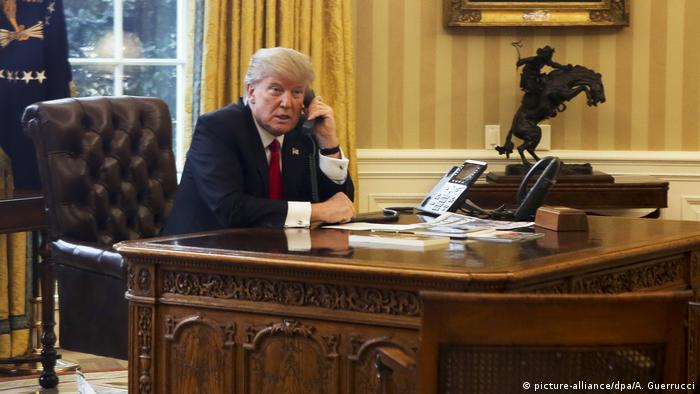 US President Donald Trump on Friday spoke with Palestinian leader Mahmoud Abbas for the first time since assuming office in January and invited him to Washington in the near future, the White House said.

"The president emphasized his personal belief that peace is possible and that the time has come to make a deal," the White House said. "The president noted that such a deal would not only give Israelis and Palestinians the peace and security they deserve, but that it would reverberate positively throughout the region and the world."

The Trump administration said the United States could not impose a solution and that the Israelis and Palestinians must negotiate directly. Israel has advocated for bilateral talks, but the Palestinians prefer an international format to ensure any peace deal is implemented.

Abbas told Trump the goal should be to establish "a Palestinian state alongside the state of Israel" and that, if the Israelis were ready, the Palestinians would re-start peace talks.

Trump has vowed to be the most pro-Israel president in history, suggested he would move the US embassy from Tel Aviv to Jerusalem, and initially took an uncritical view of settlement expansion. Last month, he broke with longstanding US policy when he said at a meeting in Washington with Israeli Prime Minister Benjamin Netanyahu that he was not bound to a two-state solution.

Netanyahu's visit came days after the Israeli parliament passed controversial legislation to retroactively legalize thousands of settlements in the West Bank, in the same areas where the Palestinians would plan to form any future state.

The Israeli prime minister and right-wingers have been emboldened by Trump's election victory, with some hardliners suggesting Israel should annex all or part of the West Bank.

However, after initially giving Israel free rein to expand settlements, Trump has reversed course, saying last week annexing parts of the West Bank would cause an "immediate crisis" in relations between the two allies. Meeting with Netanyahu in February, Trump said settlement expansion "may not be helpful" and that "both sides will have to make compromises."

The last round of US mediated indirect peace talks broke down in April 2014.

A US official has slammed the UN Human Rights Council's criticism of Israel, saying it tarnishes its credibility. The council has issued more than 60 resolutions condemning the Middle East nation's human rights record. (01.03.2017)

Trump says Israel should be 'reasonable' in peace process

US President Trump has described Israeli settlement growth as detrimental to achieving peace in the Middle East. The statement came ahead of a meeting between the president and Israeli Prime Minister Benjamin Netanyahu. (10.02.2017)