Amazon wildfires set to cause irreversible damage | Environment | All topics from climate change to conservation | DW | 27.08.2019

By the end of the dry season, the fires in Brazil could spread to other untouched forest areas, threatening the survival of individual tree species. But it's still too early to assess the full extent of the damage. 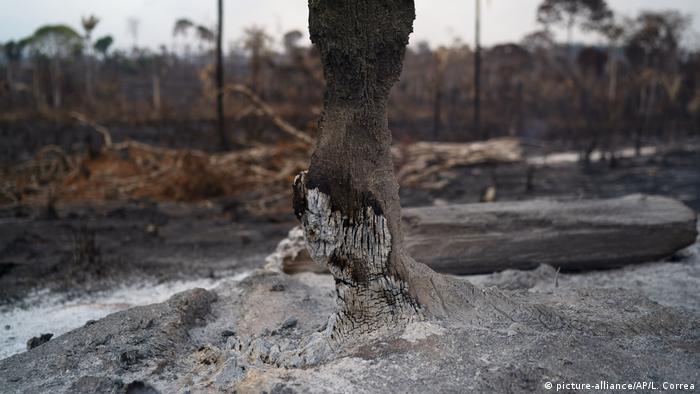 "We don't know how many fire spots will jump from the farmland into the forest," said Paulo Brando, an expert from the independent Brazilian-based Amazon Environmental Research Institute (IPAM). "Currently, the satellites can only detect existing fires."

For weeks, the fires in the Amazon rainforest have attracted international attention. Compared to 2018, the total number of fires increased by 82% between January and August this year. In August alone, almost 26,000 fires were reported.

In the state of Para, where most of the fires are burning, prosecutors are investigating a group of farmers who organized a so-called 'day of fire.' On August 10 they reportedly set a number of fires on forest land — allegedly to show their support for President Jair Bolsonaro. As a result, satellite images observed an increase in fire sources.

The fires were first reported in local newspaper Folha do Progresso in the "Novo Progresso" community in the state's south. "We have to show the president that we want to work, and that's only possible with clearing and we need fire to clear away the deforested areas," the newspaper quoted one of the organizers.

According to the investigating prosecutor, Paulo de Tarso, most of the fires were lit on state-owned nature reserves. These areas are constantly under threat by landowners, speculators and mine operators. The prosecution is also investigating reduced control by the state and the lack of support and equipment provided by the government-run Brazilian Institute of the Environment and Renewable Natural Resources (IBAMA). 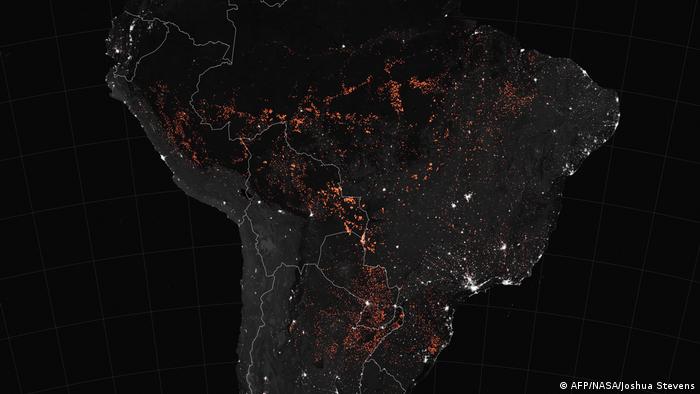 A NASA Earth Observatory map showing active fire detections in South America. The fires in the northern states of Para and Amazonas in Brazil are notably concentrated in bands along the highways closer to communities

"In addition to this, large sums of money that Brazil receives through the Amazon Fund to combat deforestation have been waived," said de Tarso in reference to the suspension of financial aid from Norway and Germany due to Bolsonaro's lax environmental policies. During the G7 summit in Biarritz, the far-right leader once again rejected offers of emergency aid to help extinguish the Amazon wilfires.

Areas which have already been damaged by deforestation are particularly vulnerable to forest fires. "Deforestation and illegal exploration for natural resources in primeval forests create clearings and fragment the woodland," explained Paulo Barreto from the Amazon Institute of People and the Environment (IMAZON) in Belem. "The trees which then grow in this area are dry and ignite more easily."

The dense canopy helps protect the soil and dry undergrowth beneath, preventing it from igniting so easily

The forest is also under increasing pressure during dry years, forcing the trees to transform in order to survive. "To reduce water consumption, the trees shed their leaves," said Barreto. "Without the protection of healthy treetops, more sun reaches the soil and the dry undergrowth. This means the fires will spread from the areas which have already been slashed and burned to the denser jungle." Overall, a combination of dry leaves, higher temperatures and a fragmented rainforest increases the risk of wildfires.

According to a recent study by IPAM, forest mortality can affect up to 90% of trees in dry years, especially on the edge of the forests. "The landscape is changing radically," said IPAM's Brando. "We're seeing grazing lands penetrate the forest and a major decline in biodiversity."

The study is based on a nine-year observation period. "We've seen persistent degradation, we've witnessed the death of large trees and the lifespan of the trees has been significantly reduced," said Brando.

In areas where the vegetation has at least somewhat recovered after a fire, the study showed that the rainforest still won't be able to release water into the atmosphere and absorb carbon for at least seven years. Research in the region also reveals the serious impact the fires have on biodiversity. Even if a part of the forest recovers, it won't necessarily have the same variety of tree species.

The climate has also changed compared to a few decades ago. According to Brando, the average temperature in the Amazon is already one degree warmer than it was 60 years ago and the dry season is now three weeks longer compared to 40 years ago. The impact of the wildfires "is not a linear process," he said. "The more we change the climate, the greater the chance these changes will be severe."

French president and G7 summit host Emmanuel Macron's threat to ditch a trade deal over the fires in Brazil met with immediate resistance from fellow EU member states, including Germany and the UK. (25.08.2019)

The Brazilian president has accused Macron, and the other members of the G7, of treating Brazil like "a colony." This came after the leaders at the summit in Biarritz dedicated $20 million to the wildfires in the Amazon. (26.08.2019)