After the drought is before the drought | Environment | All topics from climate change to conservation | DW | 02.05.2019

Last year's drought is still impacting soils in Europe, and though it is still early in the year, farmers already have to water their fields. Is this set to become the new normal? 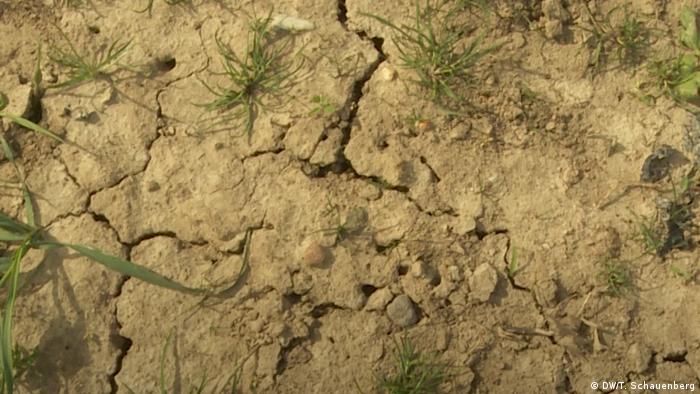 As farmer Markus Schwarz drives his spade into the ground, the soil he brings to the surface is so dry that the wind blows it away.

"We can see here that the first 10 cm of the surface are as dry as dust," he says. "But it ought to be moist so the plants can strike roots."

Schwarz tends to 150 hectares of lettuce, broccoli, strawberries and cauliflower on his farm in western Germany's Rhineland region. Temperatures there have already climbed to 25 degrees Celsius, though it's still only spring.

"People might enjoy that but we're starting to get worried that this year will be like the last," Schwarz told DW.

As one of Germany's fourth driest years  since the National Meteorological Service (DWD), started recording rainfall patterns in 1881, Schwarz says he had to water his fields with an overhead sprinkling system from last July to September. Although he managed to save most of his harvest, high water costs minimized his profits. 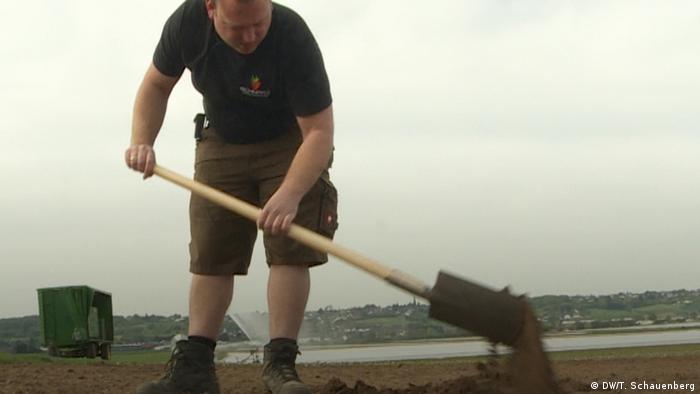 Farmer Markus Schwarz worries about the parched soils on his field and what another dry, hot year would mean for his harvest

Others simply lost what they planted. According to the German Farmer's Association, the 2018 drought destroyed harvests worth between 2 and 3 billion euros ($2.2 to 3.3 billion).

Although the outgoing winter saw normal rainfall of 210 liters per square meters, Schwarz's field is already too dry for his vegetables.

Corina Schube of DWD says that is because "the rainfall of the winter couldn't compensate for the enormous deficit resulting from the extremely hot and dry summer in 2018. We are lacking between 200 and 300 liters of water per square meter."

Agronomist Peter Gerandt from the University of Göttingen describes the current situation as "very, very tense" in some areas of Germany. "The winter rain was sometimes only enough to dampen the top 20 centimeters [of the soil]."

He has been examining water reserves in and around Göttingen, a city in the northwest of the country, and has found that last year's drought dried out the soil at depths of up to two meters. That is bad for plants like rape and corn that need a lot of water, but also for wheat and sugar beets whose roots reach into the deeper lying water reserves.

Gerandt says the soil will take years to recover. Even when it does rains, because the fields are so dry, they can't absorb the water fast enough, which means valuable humus and nutrients can be washed away. Nutrients from fertilizers can thereby end up in the groundwater causing higher nitrate content levels.

Parched soils are not only a problem forfarmers in Germany, but for those in much of the rest of Europe as well.

Countries in eastern and northern Europe were particularly badly affected by last year's drought, and according to Sergiy Moroz, expert for water and biodiversity at the European Environmental Bureau, they could experience more of the same in the future.

"The frequency and intensity of droughts will increase due to climate change," Moroz told DW.

He is calling for sustainable and efficient water management, and says politicians shouldn't dilute water protection laws or allow increased use of groundwater.

"These are not sustainable solutions," he said. "Farmers have to prepare and adapt to the impacts of climate change instead of continuing with business as usual."

But Peter Gerandt says if this year is as dry as the last, farmers who don't irrigate their fields should expect "enormous harvest losses, way higher than in 2018."

Markus Schwarz has been watering his lettuces since the middle of April. At 200 euros per hectare, plus the investment in wells, pumps and irrigation systems, it's an expensive undertaking. And because farmers rely on groundwater, which Gerandt says could dry up in the future, as a solution, it offers no long-term security.

"We need rain. If there is a second, third, fourth or fifth dry year — we hope this won't happen — then we will have to see where the water comes from," Gerandt said. "We can't take it from dams or from the groundwater. Irrigation is not the ultimate solution."

Markus Schwarz checks the weather forecast. A thunderstorm is on its way. "Finally," he says. "We need two, three weeks of light rain. Then everything will be alright."

That evening, it rains heavily, saving him from irrigating his fields. At least for one day.