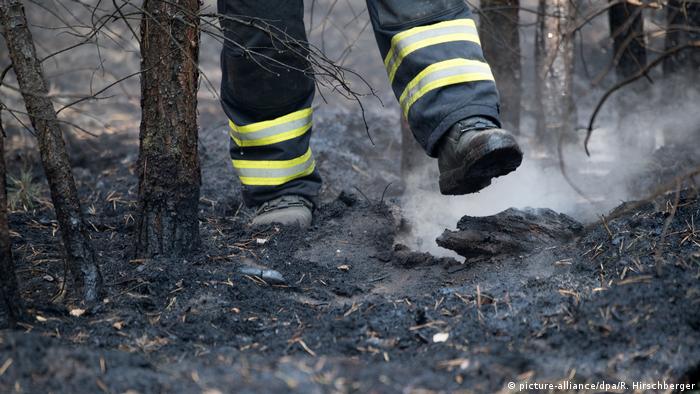 Normally, the lucrative cash crop known as rapeseed, or canola, blooms throughout the German state of Thuringia at the end of May. But this year, you would look in vain for the yellow blossoms that are usually turned into one of the western world's main sources of cooking oil.

According to Andre Rathgeber of the Farmers' Association of Thuringia, the prognosis for rapeseed is so bad, most farmers have decided to clear the land for other crops.

This is because the land is far too dry, especially in the key area about 60 cm (23 inches) below the surface, said German Weather Service (DWD) meteorologist Corina Schube.

This amount of water is usual for a subtropical region, but certainly not for Germany. The drought is particularly dangerous for Germany's forests, where even in the relatively cooler northeast, increasing temperatures have brought the forest fire danger level to either "high" or "very high."

The risk is especially dire for the country's many pine forests, where extremely thirsty trees drain the soil much more quickly than other types of timber. Unusually massive storms in recent years have added to the problem, as now dead wood and leaves litter the forest floor in much greater amounts — making perfect kindling.

Another way unusual weather problems are exacerbating Germany's risk of forest fires and poor crop yields is drought in some areas and far too heavy rainfall in others. The latter can wash away freshly planted seeds, ruining a harvest.

German agriculturalists have tried to combat climate change by planting more deciduous and fewer coniferous trees. However, the shorter roots of new trees mean they cannot reap the benefits of moisture buried deep underground, and they tend to wither much more quickly.

Forestry experts are now promoting the creation of specialized, diverse forests, with plants especially chosen to protect each other from drought, storms, and parasites.

A government commission has agreed that Germany should phase out all coal-fired power plants by the end of 2038. The government is already planning to shut down nuclear power plants over the next three years. (26.01.2019)

The fire, started by Germany's military testing rockets in the area, was expected to take a week to extinguish, an on-site firefighter told DW. Defense Minister Ursula von der Leyen visited the region to see for herself. (22.09.2018)