After Soleimani killing, Iran′s proxy war to impact Afghanistan and Pakistan | Asia | An in-depth look at news from across the continent | DW | 07.01.2020 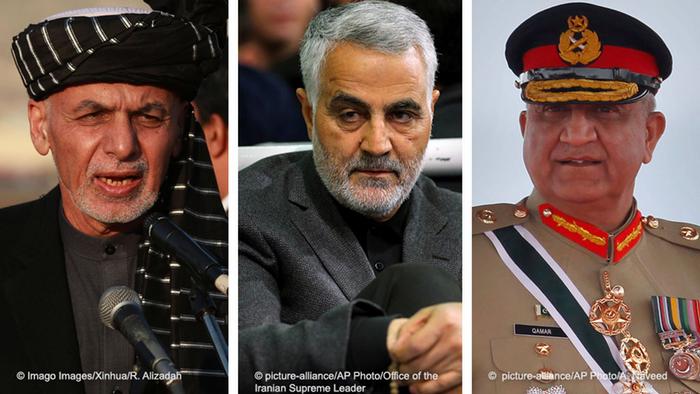 The assassination of General Qassem Soleimani, the head of Iran's elite Quds Force, by the US on January 3 has created a sense of unease in the Afghanistan-Pakistan region, which is already vulnerable to Islamist militancy.

Both the Afghan and Pakistani governments have urged restraint by Washington and Tehran, fearing that an all-out US-Iran war could unleash uncontrollable violence on their soil.

Iran has vowed retaliation for the US' airstrike against Soleimani in Iraq, but experts say the hardline Shiite regime in Tehran is not in a position to directly confront Washington. Instead, it could attempt to harm US interests in the Middle East, as well as Afghanistan, they say.

Saudi Arabia — a longtime US ally in the Middle East — and Iran are already engaged in a proxy war in places across the region.

The Iranian regime has also expanded its influence in Afghanistan over the past decade, and more recently by directly engaging with the Taliban.

Taliban commanders have traditionally been allied to Riyadh due to the Sunni-Wahhabi ideology they share with Saudi monarchs.

But the influence of both Saudi Arabia and Pakistan on the Islamist group has been substantially reduced in the past few years. Tehran has made inroads in the region, and security analysts say it could complicate matters for US President Donald Trump's administration, which has been trying to finalize a peace deal with the Taliban for a respectable departure from the war-torn country.

The Taliban as Iran's proxies?

The Afghan government said Friday it was concerned about an escalation of violence in the region after Soleimani's death.

"We call on the Islamic Republic of Iran, our big neighbor, with whom we have a common language, religious, historic and cultural [values], and on the US, who is Afghanistan's strategic and fundamental partner, to prevent conflict escalation, and we hope that both sides solve their differences through negotiations," said a statement from Afghan President Ashraf Ghani's office.

The statement depicts Kabul's dilemma, as it does not want to offend the US, nor does it need another violent conflict on Afghanistan's long border with Iran. And yet, Soleimani's killing is likely to sabotage the peace process with the Taliban.

Read more: Will Iran try to tie down the US in Afghanistan?

"Soleimani had supporters in a number of extremist groups in Afghanistan, and they could act against the US. Iran is not capable of directly attacking US targets in the country; the only force that can do that is the Taliban," Amarkhail told DW, referring to Soleimani's alleged role in recruiting Afghans to fight for President Bashar al-Assad in Syria.

The situation will have a negative impact on the ongoing peace process as well as the overall security situation in Afghanistan, the expert added.

Abdul Baqi Amin, the head of the QASED Strategic Research Center in Afghanistan, said the Afghan government must remain neutral in the conflict, although he admitted that Iran can influence Afghan politicians.

Rahmatullah Nabil, the former head of Afghanistan's NSD intelligence agency, said Kabul should try to stay away from the conflict.

"Soleimani was an asset for Iran as well as a threat to the region. He was a master of proxy wars, credited with the creation of a number of regional militant groups. His death will increase tension in the region. If the Afghan government fails to maintain a neutral position, the current circumstances will destabilize Afghanistan even further," Nabil said.

But Afghan neutrality does not guarantee that US forces in Afghanistan will ignore a possible Iranian threat.

"Iran must be assured that its interests will not be threatened from Afghanistan, but Afghan authorities have no control over US forces in the country. Also, Kabul can't rein in pro-Iran fighters, who have fought in the Middle East, especially in Syria," analyst Amin underlined.

The complicated situation in Afghanistan is likely to draw in Pakistan, another important player in the region, and one of the few countries in the world that recognized the Taliban government in Kabul in 1996.

Security analysts say the Islamic country still has considerable influence on the insurgent group, made evident by the fact that it has been playing a pivotal role in brokering a deal between the US and the Taliban.

The US is aware of Islamabad's significance in the aftermath of Soleimani's assassination. US Secretary of State Mike Pompeo promptly made a telephone call to Pakistan's army chief, General Qamar Javed Bajwa, after the assassination on Friday.

"Pakistan's Chief of Staff General Bajwa and I spoke today about US defensive action to kill Qassem Soleimani. The Iran regime's actions in the region are destabilizing and our resolve in protecting American interests, personnel, facilities, and partners will not waver," Pompeo said on Twitter.

Unlike Afghanistan, Pakistan has a powerful and well-trained military, which has assisted the US in its past interventions in Afghanistan. The Trump administration might hope that Pakistan's generals could use their influence to stop the Taliban from falling into Iran's orbit.

Ties between Iran and Pakistan have been tense for many years due to a deep mutual mistrust. Islamabad and Tehran accuse each other of backing separatist groups, which are active in Pakistan's and Iran's Baluchistan provinces.

Shiite-majority Iran is wary of Islamabad's alleged support for various Sunni militant groups, which have been involved in launching attacks in Iran's eastern areas, and massacring Shiite citizens inside Pakistan.

Will Pakistan support the US on Iran?

Supporting the US on Iran "would be a tough decision for the Pakistani government," Hasil Bezenjo, an opposition politician in Islamabad, told DW.

"Pakistan has a large Shiite population and if Islamabad sides with Washington, it would unleash a sectarian war in the country."

At the same time, Pakistan cannot afford to go against the US and Saudi Arabia, as its economy is heavily dependent on the two countries.

"An independent approach would be best for Pakistan, but I fear the government won't be able to remain neutral in this conflict. Pakistan desperately needs funds from the IMF and the World Bank," Najamuddin, an Islamabad-based analyst, told DW.

Shiite groups in Pakistan are already skeptical of the government's neutrality claims. "Pakistan is not neutral. If a war breaks out between Iran and the US, Washington would even demand military bases in the country. Pakistani officials have not directly condemned Soleimani's killing, which shows that the country has already sided with Saudi Arabia and the US," Rashid Rizvi, the head of a Shiite organization, told DW.

Experts contend that the Pakistani army would benefit from a US-Iran confrontation, as it would give generals more leverage domestically and internationally. Soon after Soleimani's killing, Washington revived a military training program for Pakistan, and the Trump administration could soon restore suspended military aid for the South Asian country.