The sustainable farming practice of herding sheep hundreds of kilometers dates back millennia. We meet the people keeping the tradition alive despite pressure from industrialized agriculture, tourism and climate change. 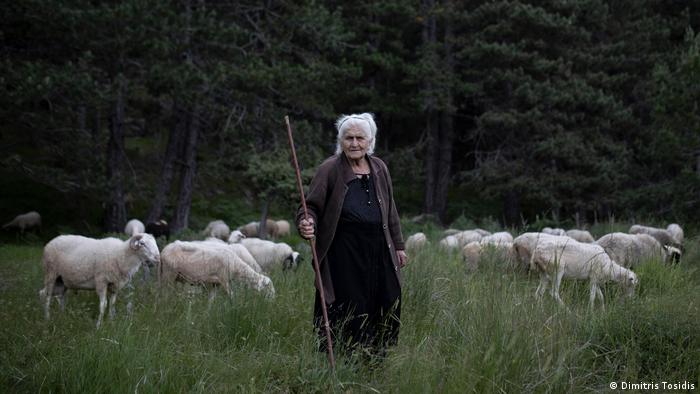 After decades of summers camping on Greece's Mount Smolikas, Eleni Tzima said 2020 would be their last

Eleni Tzima and her husband Nasos Tzimas have herded their livestock some 150 kilometers (93 miles) between summer pastures in northwest Greece's isolated highlands down to their winter home in the lowlands for the past 53 years.

The Tzimas family is part of a millennia-old tradition of transhumance, or the seasonal movement of animals between fixed grazing grounds. But that tradition is dying and they are some of the last still practicing this type of farming in the country.

During the summer months the couple, both in their 80s, live in a makeshift hut, using solar energy to power a radio, cellphones and lights. They're among the oldest pastoral shepherds to take part in an annual trek, known as "diava," in the mountainous Pindus National Park near Greece's border with Albania.

Tzima, who says her husband's ill health means their 2020 trek was likely their last, describes their way of life as hard but rewarding.

"We struggle every day from dawn to dusk. I've never had a day off because these animals don't," she said. "I'm used to the cold climate and the quiet of the mountain summer. I didn't choose this life, but if I had a choice, it would be this." 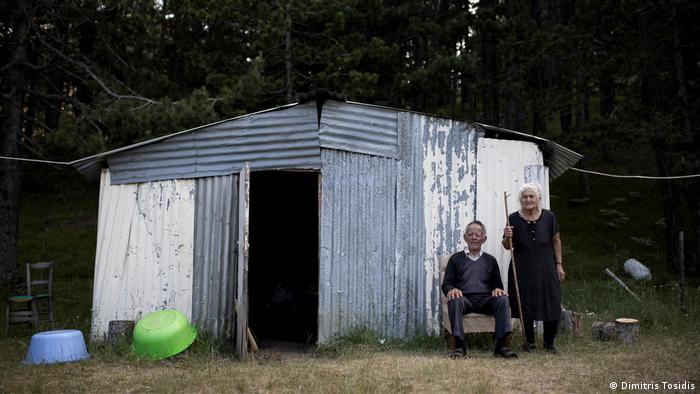 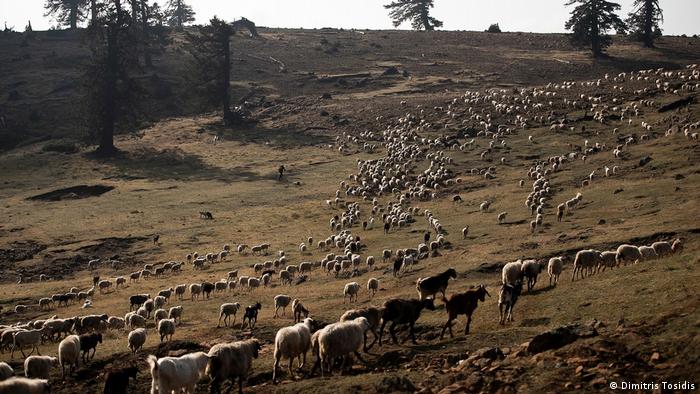 Every shepherd follows a specific path according to individual family tradition

Transhumance is mainly practiced by Greece's indigenous groups like the Vlachs and Sarakatsani, as well as migrants from Albania and Romania. Once relatively widespread, the tradition began to lose popularity in the 1960s and 70s as mechanized agriculture and new farming technologies took over. That shift continued amid rapid urbanization on the back of economic growth in the decades that followed.

UNESCO named transhumance an "intangible cultural heritage" in 2019, and describes it as one of the most sustainable and efficient ways to farm livestock. Moving animals means pastures have time to recover and don't become overexploited, while shepherds can avoid summer droughts by heading to the mountains where snow is melting, and grass is growing.

Migration along well-trodden paths has also shaped the landscape, creating unique, open-space habitats that are home to an array of plants and animals, as well as wildlife corridors for other animals to move through. Some studies also show nomadic grazing livestock may help prevent forest fires. 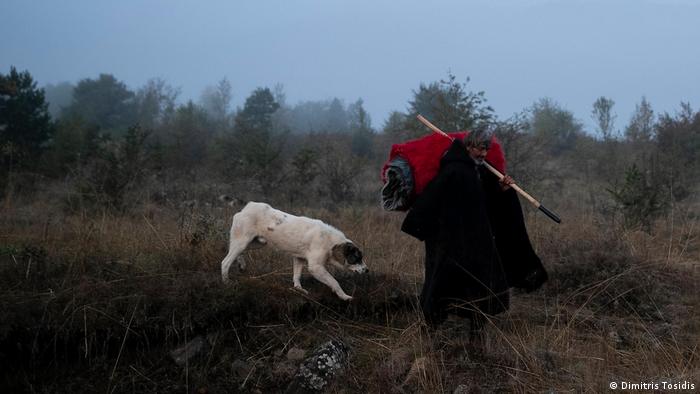 A shepherd walks in the morning fog carrying heavy blankets. They usually wear a thick coat made of goat's wool that is suitable for sleeping outside 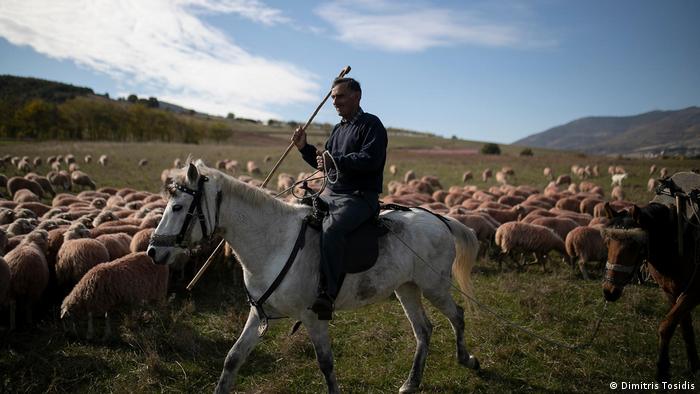 Thomas Ziagkas on horseback as he brings his flock to their winter destination in Deskati, Greece

Today, as fewer shepherds tread the well-worn paths, the forest is closing back in and the extensive network of routes created over time is vanishing.

Thomas Ziagkas paints his sheep using red soil, so his animals won't get mixed up with other flocks. Nowadays he rarely meets other shepherds on the road.

Yet the 72-year-old keeps up the family tradition because he wants to show that his sheep have journeyed — unlike the stationary flocks grazing on the plains.

"It feels like an honor that my herd walked from the mountains down here," he said. "I have to show it." 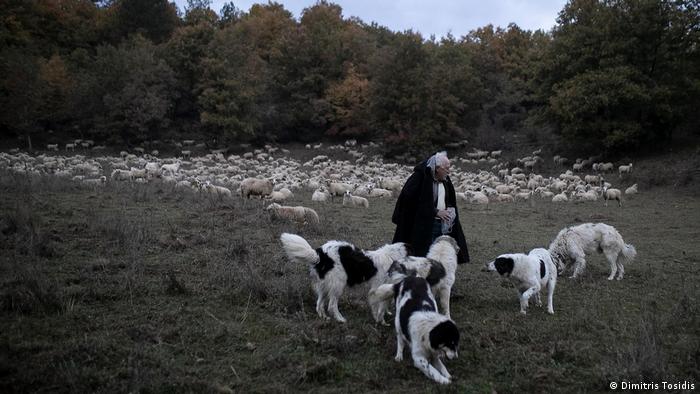 Giorgos Anthoulis feeds his sheepdogs in the early morning. It's important to keep the dogs healthy so they can control the flock and keep them safe from predators 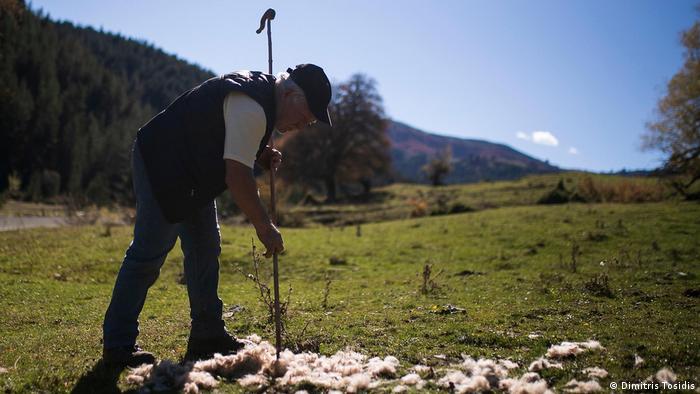 Following in the footsteps of ancestors

Giorgios Anthoulis has been embarking on this seasonal journey since he was just a few months old, when shepherds still moved their entire families and belongings on horseback. Now it's just the 74-year-old and his 35-year-old son Giannis, who accompany their 3,000 sheep across the land.

The pair herds a traditional, and now seldom seen, small breed adapted to high altitudes and mountain terrain. Though the animals produce less milk than newer, more favored breeds, it's tastier because of their mountain herb diet, said the elder Anthoulis. 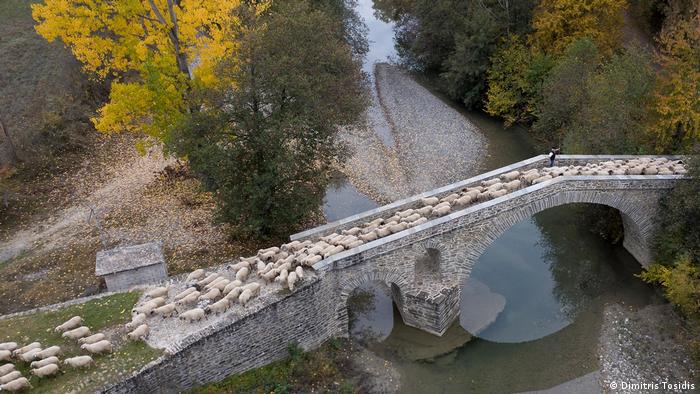 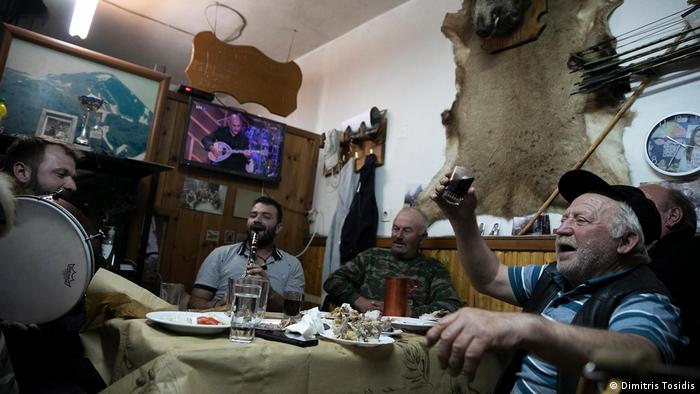 As part of an annual tradition before setting off, Giorgos Anthoulis celebrates with other locals in a tavern and offers one of his sheep up as a parting gift

In October, when shepherds see the first snows on the summit of Mount Smolikas, Greece's second-highest peak, they leave the tiny mountainside village of Samarina and head to their winter pastures. They travel 120 kilometers (75 miles) south through the wild landscape of peaks and plateaus to another village, Vlachogianni, staying overnight in the forest on the way.

"Every fall, when we have to move, I feel its greetings," said Giorgos Anthoulis, speaking of the mountain, which acts as his guide. "It's not only me: the sheep feel when the day of the migration comes. They wake up in the morning and start walking south."

In the last few years, Anthoulis has noticed differences in the climate.

"The summers last longer. It seems that autumn disappeared. I don't know if this is climate change but it's obvious," he said.

At the beginning of October, brothers Nikos and Giannis Saitis sit around a bonfire after an exhausting day of walking in the mountains with their flock. They say the journey between pastures is good for the animals.

"The mountain makes them strong and healthy — also me," said Nikos Saitis. "If they are transported by trucks, they get a shock, because of the abrupt change of place and altitude, like jetlag for humans." 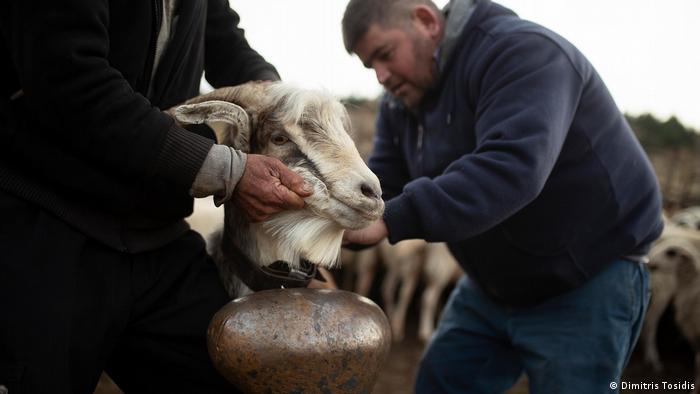 Nikos Saitis places a bell on a goat that will lead his flock — each herd's bell has its own distinct sound and helps keep the animals together when they move in poor visibility. 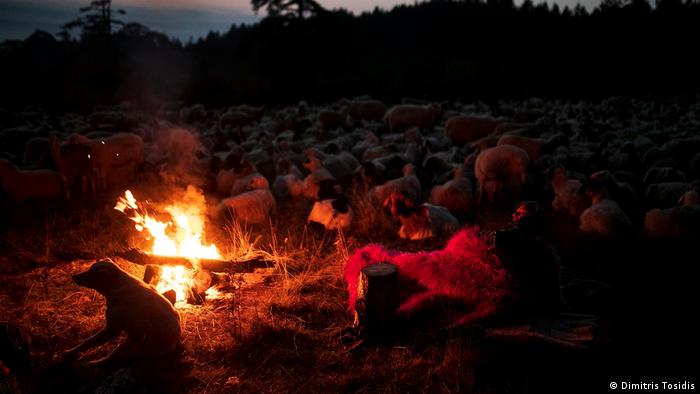 Giannis Saitis gets ready for bed — at night, the sheep make a huge circle around the humans and the fire to stay warm and safe

Each year, the two look forward to the journey that marks the beginning of winter and the hard work of lambing and milk production that follows.

Shepherds here usually turn the milk into cheese. It's difficult to transport fresh milk every day to processing plants from such remote locations, particularly in the highlands. Sometimes they sell the cheese to locals or traders who come to meet them.

Feeding the sheep on fresh mountain grass and vegetation produces high-quality and healthy cheese, milk and yogurt that farms can't match, said Nikos Saitis. Although, shepherds are forced to sell their goods at lower prices that don't reflect the quality and labor behind them in order to compete with industrially produced dairy items, he added. 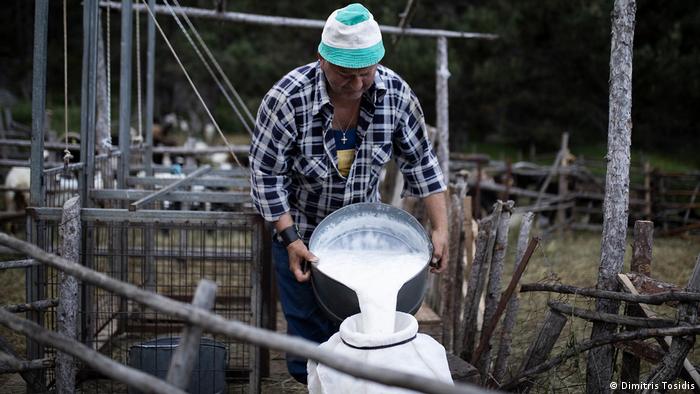 A changing climate and shifting times

Back at the Tzimas' summer home, Eleni Tzima lights a candle for what will likely be the last time at a makeshift altar near their hut just before the family sets off to their flocks' winter pasture.

She's noticed the shifting times in other ways. The shepherd used to see the odd hiker passing by and would offer them Greek coffee.

"But for the first time in my life I saw a tourist bus. The door opened and a lot of people got out to say hello. The driver was terrified because he didn't know that the road was so terrible," she explained. "I was astonished. I've walked up and down these mountains my whole life and then suddenly there's a tourist bus!"

Correction, 04 March 2021: A previous version of this article contained an incorrect kilometer to miles conversion, an error which occurred during the editing process. This has been corrected.

With rising deforestation rates in the Amazon and 80% of logging linked to cattle ranching, some in Brazil are trying to boost sustainable livestock farming practices.

India's camel nomads compete for a place in the modern world

The humble camel's hump can easily overshadow the animal's other characteristics — such as the health benefits of its milk. Efforts are underway to change that, and keep an old tradition alive in the process.