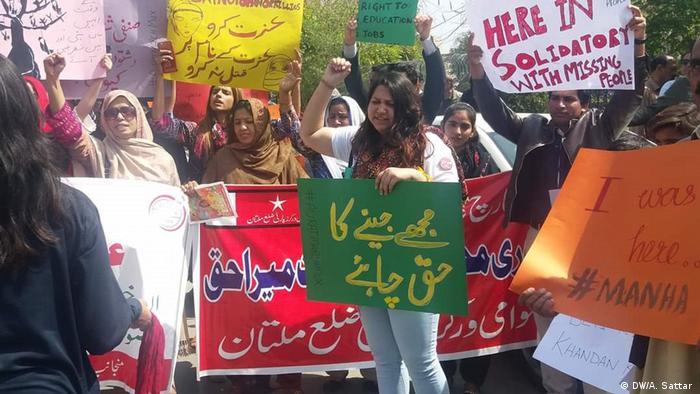 Thousands of Pakistani women took to the streets on Sunday in the largest-ever women's rights demonstrations in the country.

The marchers, who were commemorating the International Women's Day, demanded gender equality, minimum wages for the working class and bodily rights, as they raised slogans against sexual harassment and gender-based violence.

The World Economic Forum ranked Pakistan 151 out of 153 countries in its 2020 Global Gender Gap Index Report. Violence against women, including rape, domestic abuse and harassment, remains a major issue in Pakistan, according to human rights watchdogs.

A manifesto released by "Aurat March" (women's march) organizers demands economic and environmental justice, reproductive rights and better access to public spaces for women. Additionally, the manifesto seeks an end to enforced disappearances and militarization, as well as protection of religious minorities in the country.

"Every day, women in Pakistan are bullied, discriminated against and arrested, physically attacked and killed, simply for making choices about their bodies and the way they live their lives," said Amnesty International in a statement ahead of the rallies. "The people who commit these crimes are the ones who must be stopped, not the protestors," the statement added.

The first "Aurat March" in Pakistan was held on International Women's Day in 2018. It has since become a major event for the women's rights movement in the South Asian country. This year, the main rallies were held in Islamabad, Lahore and Karachi, as well as several smaller cities.

As the women's rights movement is gaining momentum, the opposition from conservative groups and Islamist organizations has also increased manifold in the past few years. Fundamentalists label the movement as a "Western campaign" to promote "vulgarity" in the country.

In Islamabad, Pakistan's capital, Islamist groups held a counterrally to "Aurat March," hurling stones at liberal activists and attacking them with sticks. Several participants of the women's march were reportedly injured as a result.

Sonya Rehman, a writer who participated in the rally, told DW that the Islamist protesters "wielded batons and had every intention of attacking and harming us."

"It was horrific," she added.

Ahead of Sunday's rallies, two separate petitions were filed in Lahore and Islamabad courts to stop "Aurat March," arguing that they were against Pakistan's culture and Islamic teachings. One of the petitioners accused the organizers of receiving funds from "anti-state forces." The court, however, dismissed both petitions and allowed the women's march to go ahead.

Leena Ghani, one of the march organizers in Lahore, told DW that a smear campaign was initiated against women's rights activists after the success of the first "Aurat March."

"We march peacefully, and it is our constitutional right," she underlined.

'My body, my choice'

Nida Kirmani, a professor of sociology at the Lahore University of Management Sciences (LUMS), says that "my body, my choice" is being interpreted as a promiscuous demand, however, it is about women's rights to have autonomy over their lives.

Shehzil Malik, an artist, says the slogan is about bodily autonomy. "It means that it is my body and no one can violate it, abuse it, harass it, grope it, or do anything with it without  my consent."

These explanations, however, have failed to convince many Pakistanis. A parliamentarian linked with the opposition Pakistan Muslim League (Nawaz) lashed out at women's march participants. "My body, my choice is aimed at spreading vulgarity," he said. "They want to destroy this country's social structures."

Similarly, Fazlur Rehman, head of an Islamist political party, decried the slogan, asking his followers to stop the rallies.

Kirmani says there is only one reason behind the backlash against the women's march: the audacity of young women. "Men don't like that women are claiming public spaces by marching on the roads for their rights," she said.

"I fully support the march because it demands economic and social justice for the working-class women," she added.

"It gives me the space to tell the stories [of injustices that we face] and not feel alone," she added.

Ahead of the International Women's Day demonstrations, Malik's promotional posters for "Aurat March" were torn apart by some men. In Islamabad, a group belonging to a radical mosque stopped activists from finishing a mural, which was later defaced.

"Does my presence offend you so much that something that looks like me is un-Islamic to you?” Malik asked.

Despite the hurdles, march organizer Leena Ghani sees a silver lining: "The public debate that 'Aurat March' has triggered is groundbreaking," she said.

"Men, for centuries, believed they owned women's bodies, so a placard asserting a woman's right to her own body is not going down well with them."