Mukhtaran Mai: ′More Pakistani women are demanding their rights now′ | Asia | An in-depth look at news from across the continent | DW | 25.03.2019

In an interview with DW, Mukhtaran Mai, a 2002 gang rape survivor, said that her struggle for justice is not only for her but for all Pakistani women. She is appealing a court decision that acquitted the rapists. 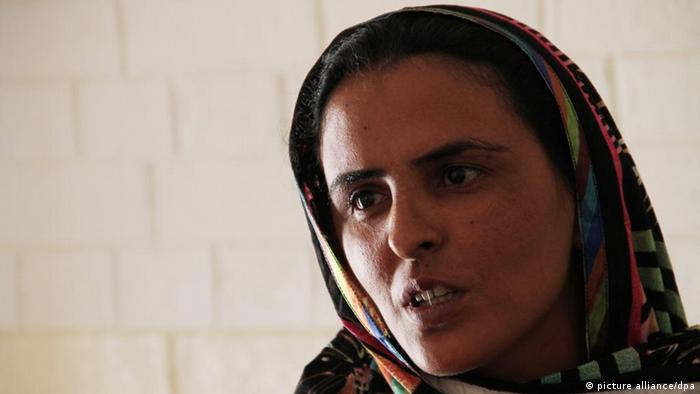 Mukhtaran Mai was gang-raped in June 2002 on orders of a "panchayat" (village council) as "punishment" for her younger brother's alleged illicit relations with a woman from a rival tribe. The rape made international headlines, with women's rights groups demanding justice for Mai and punishment for the rapists.

In August 2002, an anti-terrorism court sentenced six out of the 14 accused persons to death. Four of them were sentenced for rape, while the other two were convicted as being members of the village council. Eight others were released.

However, in 2005, the Lahore High Court acquitted five of the six convicts while one person's death penalty was converted to life imprisonment.

Mai challenged the decision in the Supreme Court, but her appeal was rejected in 2011. In her review petition, Mai requested the apex court to form a larger bench to hear her case, saying that she was dissatisfied with the Lahore High Court and Supreme Court's decisions.

The Supreme Court is set to hear her appeal on March 27.

In the meantime,. Mai has gained international recognition for her efforts to improve women's rights. In 2005, she was named "Woman of the year" by Glamour magazine. Mai also started the Women's Welfare Organization NGO to educate Pakistani women and girls.

In an exclusive interview with DW, Mai said she would continue her struggle for women's emancipation irrespective of the impending Supreme Court decision on March 27.

DW: Earlier this month, the Pakistani Supreme Court adjourned the hearing of your review petition against the acquittal of 13 people accused in the gang rape to March 27. Why is the legal process taking such a long time to complete?

Mukhtaran Mai: The lawyers can tell you better about the legal issues; I don't really know much about these matters. The accused in the case pleaded that they needed more time and the chief justice granted them that.

What are your expectations from the upcoming Supreme Court hearing?

I can't say much about that. All I can say is that it has been a long and difficult struggle for me - from filing a police report in 2002 to taking the case to the top court. I trust in God. I am not sure that the court will rule in my favor. I have been demanding justice for the past 17 years. But I am not doing it for myself. If it was only about me, I could have left the country. I could have lived my life peacefully. Once you leave the country, you forget about the past ordeals. But I preferred to stay in my country. But I have to tell you that I have not been in my town for the past two years.

Because the government has removed my security. I have been through so much to highlight the issue. I had been house arrested. The government in 2002 (military general Pervez Musharraf was at the helm when Mai was gang-raped), was not supportive at all. When I go to courts, I hear obnoxious things about me. It has been very difficult for me. But I haven't lost hope.

In March 2005, five convicts in your case were acquitted by the Lahore High Court, while one sentence was converted into life imprisonment. Didn't you lose faith in the legal system?

It saddened me. A 2011 verdict was also against me. Then I kept appealing against the decisions. Now it is 2019. It has been very disheartening.

You said that your struggle is not just for you but for the oppressed Pakistani women. What motivated you to take up the women's right issues?

I thought that only uneducated people usurp women's rights, as they are not aware of human rights. That's why I started working on educating the villagers. At the same time, my legal struggle continued. I spoke on various forums, where I had to recall and relive my ordeal. It was extremely painful. It is true that I also gained recognition for my work and struggle, but I also had to suffer immensely.

I am doing this for the future generations. I don't want any woman to go through what I've been through. I launched an awareness campaign in my Mirwala town hoping that there won't be another Mukhtaran Mai ever.

At one point, even my family did not support me. They would tell me that raising the gang-rape issue would bring shame to them. It is a strange argument that those who committed such crimes are not condemned, but the victims. So all my initiatives and projects are aimed at changing this environment.

Do you see any attitudinal change in your town as a result of your campaign?

I can't say that there has been a big change, but I can say that women are now demanding their rights. Whether they will get their rights or not is another issue. Things have definitely changed in my town though.

What kind of projects have you launched in your home town?

We mainly work on women's education. We also opened a shelter home for women. Women who face abuse are given shelter in these homes. We also provide medical aid to women, but due to a lack of financial support, we've had to scale down some projects.

You have become an icon for women's resistance and empowerment in the West also. How can the West support the women's cause in countries like Pakistan?

The West, as well as the Pakistani government, must ensure that there are pro-women laws in the country. And not only that; the laws should be implemented also. There are laws in Pakistan but there's no implementation.

The interview was conducted by Shamil Shams in Karachi.