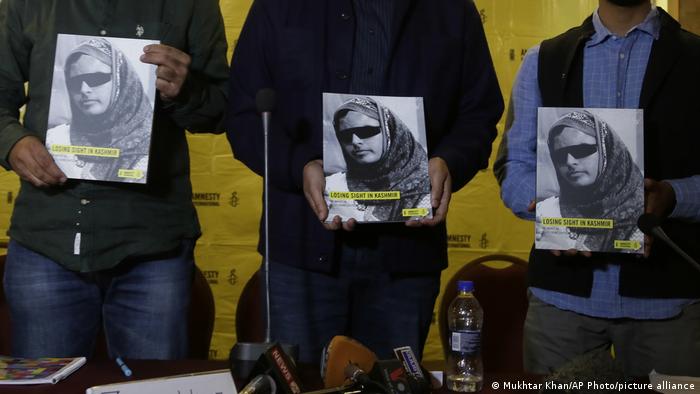 Amnesty India said its bank had been frozen by India's Enforcement Directorate, a governmental investigative agency, forcing it to lay off its 150-strong staff and stop campaign and research work.

"For a movement that has done nothing but raise its voice against injustice, this latest attack is akin to freezing dissent," he added.

Why were Amnesty's accounts frozen?

According to India's home ministry, Amnesty India received funding flowing into India through Foreign Direct Investment (FDI), a route that is not allowed in the case of non-profits.

It said Amnesty's claim of a "witch hunt" targeting human rights groups was "far from the truth."

"Amnesty is free to continue humanitarian work in India, as is being done by many other organizations. However, by law, India does not allow interference in domestic political debates by entities funded by foreign donations," the ministry said in a statement seen by DW.

However, human rights campaigners, organizations and NGOs believe the pressure on Amnesty is part of a larger objective by the Indian government to use bullying tactics and repressive regulations to stifle operations.

The government recently enacted changes in the Foreign Contribution (Regulation) Act (FCRA), setting new conditions for NGOs that could have far reaching consequences.

Activists say the recent changes to the FCRA act are a way to crush challenges to power posed by NGOs.

"All this is part of a larger pattern. The crackdown on Amnesty and the FCRA amendments sends out a message loud and clear: NGOs should only play a service role and not a watchdog role. If that is not acceptable, the government will restrict you," Amitabh Behar, CEO of Oxfam India, told DW.

NGOs speak out against law

Leading organizations also say the FCRA would impact the livelihoods of people working with small NGOs and ultimately lead to the dismantling of the entire sector.

"The fact that civil society organizations are choked using a list of legislation, even going beyond FCRA, only indicates the level of intolerance to dissent and criticism," Henri Tiphagne, executive director of People's Watch, told DW.

"This bill restricts how civil society organizations can access foreign funding and has often been used to curb dissent and immobilize human rights organizations that expose violations and speak truth to power," Kavita Krishnan of the All India Progressive Women's Association told DW.

Activists had petitioned leaders not to sign the legislation into law, describing it a as death knell for the NGO sector.

"The government's actions against Amnesty India are part of increasingly repressive tactics to shut down critical voices and groups working to promote, protect and uphold fundamental rights," said a joint statement.

"It is clear that PM Modi wants to close down NGOs to control social initiatives by independent groups. He sees them as opposition," Tapan Bose of the Free Rohingya Coalition, a human rights advocacy group, told DW.

In the past, various Indian governments, including the opposition party, Congress, have evoked "national security" and "public interest" to block demands for transparency and accountability.

These organizations criticized infrastructure and mining projects, sought justice for the anti-Muslim violence in Gujarat in 2002 and exposed violations against Dalit people. In response, they faced repeated questions about their work, threats of investigations and blocked foreign funding.

On August 5, Amnesty India released an update on the dire human rights situation in Kashmir for the first anniversary of New Delhi's having scraped the region's special status.

Days later, Amnesty released another damning report on the riots in Delhi earlier this year, accusing the police of being complicit in the violence, which claimed the lives of at least 53 people, mostly from the Muslim-minority community.

Many believe the two reports irked the government. Amnesty India's bank account was frozen on September 10.

"Amnesty International India stands in full compliance with all applicable Indian and international laws," the organization said in a statement, adding that its fundraising in India was carried out domestically.

"The fact that the government is now portraying this lawful fundraising model as money-laundering is evidence that the overbroad legal framework is maliciously activated when human rights activists and groups challenge the government's grave inactions and excesses."

Indian authorities have charged Amnesty with sedition after several Kashmiris allegedly called for independence at an event organized by the rights group. The complaint was lodged by a Hindu nationalist student group.