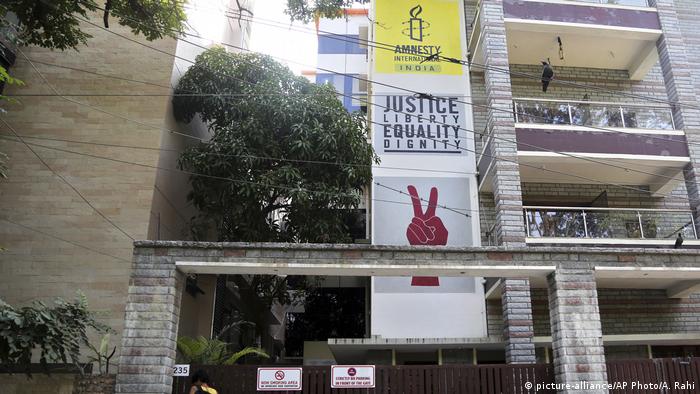 "This is an egregious and shameful act by the Indian government, which forces us to cease the crucial human rights work of Amnesty International India for now," Julie Verhaar, the acting secretary-general of Amnesty, said in a statement, adding that the organization was working "resolutely" to determine how it can continue human rights work in India.

The government of India froze Amnesty International India's bank accounts on September 10, which Amnesty said forced it to let go of staff and "pause its ongoing campaign and research work."

Amnesty said the Indian government was unduly portraying the group's fundraising as "money laundering" under a law regulating foreign donations.

David Griffiths, Director of the secretary-general's office at Amnesty International, told DW that the Indian government has brought no charges against Amnesty India to substantiate allegations of funding violations.

"Staff have been interrogated, offices have been raided, and the bank accounts have been frozen, which, incidentally, we heard about from the bank, not the authorities," he said.

"They have given us no way to answer the case they are making against us ... This is reprisal, pure and simple, for the human rights work that we are doing."

According to Amnesty, around 100,000 Indians have supported the group financially over the past 8 years.

Griffiths also slammed Indian authorities for carrying out what he called "legal harassment."

"This is a form of legal harassment from the government that is seeking to shut down criticism, to shut down those of us who are trying to shine a spotlight on human rights abuses within the country," he said.

Amnesty has accused the Indian government of carrying out a "witch hunt of human rights organizations" in response to rights watchdogs challenging the "government's grave excesses."

Amnesty has also accused the Indian military of violating human rights during New Delhi's crackdown on the Muslim-majority Jammu and Kashmir.

Amnesty targeted more than once

New Dehli has targeted Amnesty India's finances before. In 2018, Indian authorities raided its office and froze its bank accounts on similar charges.

In 2016, the watchdog faced sedition charges after Amnesty held an event to discuss human rights violations in Kashmir.

"Treating human rights organisations like criminal enterprises and dissenting individuals as criminals without any credible evidence is a deliberate attempt ... to stoke a climate of fear and dismantle the critical voices in India," said Avinash Kumar, Amnesty India's executive director.

Families fear for their relatives in India-administered Kashmir

The Kashmir conflict has split families apart for decades. Now as tensions have been reignited, families in Pakistan-administered Kashmir are worried about their relatives on the Indian side of the border.

How New Delhi's Muslims and Hindus faced violence together