In March, Prime Minister Narendra Modi in response to the global pandemic ordered a massive lockdown of the country, giving its 1.3 billion people just four hours' notice. The measures hit many of the country’s poor migrant workers hard, leaving many stranded without shelter, food or transportation.

"When this pandemic broke out in the month of January, there was only one level of laboratory which was capable of doing the test. Now there are hundreds."

Trivedi said the country was not producing enough of its own personal protective equipment (PPE) for medical staff. 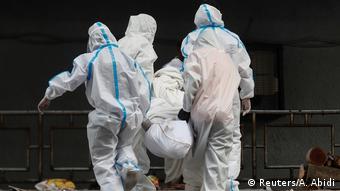 "There were low production of PPE kits, because they were not for mass production. They were used only in the hospitals, in the critical care unit section. Now we are equipped with the goods."

But the BJP spokesman seemed to say nothing would have been adequate given the country’s size and scope of challenges.

"Seventy percent of the people live in rural areas. Where 27 percent is still illiterate. With 30 percent living below poverty line."

After the lockdown began, millions of workers were left stranded with no food, shelter, money or means of transport.

"This is a totally wrong fact," said Trivedi. Proper food has been provided to all those wearing the identity card," he said.

Trivedi insisted the BJP government had provided economic assistance and financial support to help cope with the impact of COVID-19.

The ruling party’s national spokesman said some of the failures were at the regional government level: "Some state governments were unable to perform that much desired action,that has created a little bit of panic."

"Central government tried to support them with money and resources," Trivedi added.

Sebastian also raised the issue of the BJP’s push to change the naturalization law and make it easier for refugees from neighboring countries to become Indian citizens, unless they are Muslim. The Citizenship Amendment Act was put forward by the Hindu nationalist BJP government, in what PM Modi called an effort to correct an "historical injustice." The move was met with protests from rights groups which describe the legislation as discriminatory.

"All other countries [in the region] are Islamic republics. It was incumbent on the part of us [as] the secular country, and the democratic country of this region, that we should give shelter to those who are religiously persecuted."

Muslim Indian groups say the law could turn them into second-class citizens. The legislation led to violent protests. In February, the Delhi High Court asked why the police had not filed cases against BJP politicians who had advocated violence against demonstrators.

Sebastian asked Trivedi why BJP politicians who had advocated violence were not sanctioned by the party. A BJP official in Dehli, Kapil Mishra, led a demonstration calling on people to shoot protesters who were against the new citizenship law. (DW LINK)

"No, it is wrong. He had never used the word shoot."

The judge investigating the matterdescribed statements from four BJP politicians, including Mishra, as "hatemongering." The judge was then moved.

"[The] transfer of the judges in India is not done by government," Trivedi explained. On the wider issue of the use of hate speech, he said "the biggest abuse is being used against the prime minister."

Sebastian also asked for clarification on a recent deadly clash between Chinese and Indian troops in their disputed border region. Multiple casualties on both sides brought the two nuclear powers to the brink of war last month. But where did it take place and what led to the escalation of violence?

Sebastian pressed Trivedi again for where the incident took place. "There is an agreement that nobody should come, they tried to come, they were pushed back."

The Man Booker Prize winner has said the Indian government is exploiting COVID-19 to ramp up suppression of Muslims, comparing the tactic to one used by the Nazis. The BJP rejected the claim as "false" and "misleading." (19.04.2020)

How New Delhi's Muslims and Hindus faced violence together

As the smoke clears following the violent communal riots in New Delhi, stories have emerged of Muslim and Hindu neighbors helping each other as mobs vandalized their communities. (04.03.2020)

Indian police have arrested two student activists, who in February participated in mass demonstrations against a controversial citizenship act. Activists say the law discriminates against the country's Muslim minority. (28.05.2020)

India's Citizenship Amendment Act, which sparked deadly protests over fears it discriminates Muslims, will not be suspended. PM Modi's government has four weeks to respond to legal challenges ahead of the next hearing. (22.01.2020)

China called on India to "harshly" punish those responsible for deadly border clashes, but Narendra Modi said his soldiers should be proud. Germany has called on the two sides to deescalate. (17.06.2020)

The Christian Democrats and the Greens are set to play a key role in Germany's upcoming election. But is either capable of leading Germany into a new era? DW's Conflict Zone talks to representatives of both parties.

Europe faces a number of unresolved political crises that have opened battlefronts both externally and internally. Conflict Zone spoke with MEP Urmas Paet about how the EU is addressing issues within and on its borders.