Citizenship law: Is India using COVID-19 emergency to arrest protesters? | Asia | An in-depth look at news from across the continent | DW | 28.05.2020 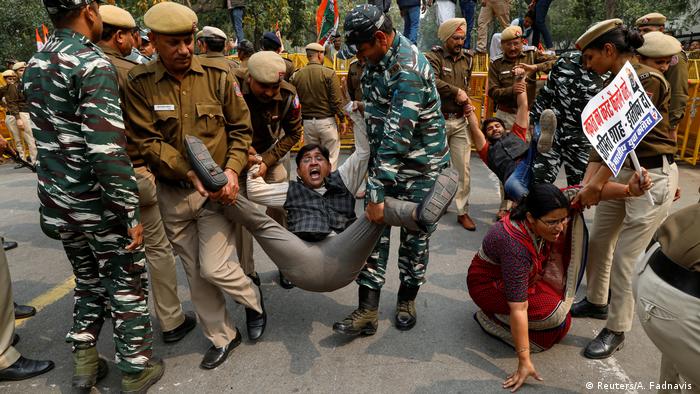 Devangana Kalita and Natasha Narwal, who are part of the Pinjra Tod women's rights initiative, were arrested by police on May 23. The court, however, granted them bail, rejecting a police request for the women’s detention.

The judge noted that Kalita and Narwal only participated in demonstrations; they did not commit any acts of violence.

But they were re-arrested a day after their release. A special investigation team booked them under charges of murder, attempted murder, rioting and criminal conspiracy.

The Pinjra Tod group condemned the arrest, saying the crackdown on student activists poses a big challenge. "However, we’ll continue to fight for equality and dignity," it added.

Protesters have risen up across India in opposition to the Citizenship Amendment Act (CAA), which was introduced by the country's Hindu nationalist Bharatiya Janata Party (BJP). The bill was passed by Indian parliament in December, 2019.

The CAA would provide a fast-track to Indian citizenship to non-Muslim refugees from Bangladesh, Afghanistan and Pakistan. Many consider the CAA to be discriminatory against Muslims.

Scores of people have died in violence surrounding the protests. Since February, police have arrested hundreds of protesters, including liberal students, who are the forefront of the anti-CAA campaign.

"The government is misusing its power, especially during the lockdown to contain the coronavirus spread in the country," Shabnam Hashmi, an activist, told DW.

Modi says the opposition parties are distorting the facts about the citizenship act to weaken his government. The premier singled out the Congress party for conspiring "to push not only New Delhi but other parts of the country into a fear psychosis.''

Despite the premier’s claims, police continue to arrest anti-CAA activists.

"Many of the cases [against anti-CAA protesters] are still under investigation. We can’t comment on them," a police official told DW.

On May 1, some 300 teachers, researchers and journalists across India released a statement against these arrests.

On Wednesday, over 500 activists, professionals and well-known citizens issued a statement condemning the arrests of Kalita and Narwal by Delhi Police. "We object to the criminalization of the right to protest. It is unconstitutional and deprives citizens of their right to free expression and criticism," the statement said.

UAPA allows investigative agencies to proscribe individuals as terrorists and empowers security officials to probe cases. A person charged under the act can be jailed for up to seven years.

"What we are witnessing is a complete travesty of justice. The criminal justice system is being used to discredit the biggest non-violent protest for the protection of the country’s constitution," Yogendra Yadav, a political activist, told DW.

Activists say the timing of the latest crackdown against anti-CAA activists is worrisome because the country is currently battling against the surge in COVID-19 cases. Most of the country is under a partial lockdown, which has restricted people’s movement. For those who have been arrested recently, it is almost impossible to get legal aid due to coronavirus restrictions.