As protests against a controversial bill broke out across India, officials in parts of the country have banned people from meeting up in groups. But sporadic demonstrations continued. 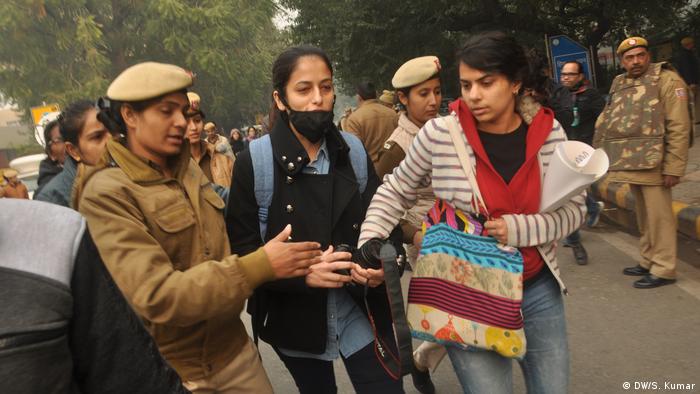 14:35 Authorities in Mangalore, where two demonstrators were killed today, said that 20 police personnel have been injured and two civilians are in an intensive care unit of a local hospital.

14:15 Prominent lawmaker Abishek Singhvi has accused the BJP of silencing all dissent through authoritarian measure like shutting down the internet and misusing the power to issue bans, such as the protest ban and curfews imposed in several municipalities.

"This is not BJP rule, it is undeclared emergency imposed in the country, which is being run in the name of normalcy," he said.

13:45 Scroll.in has reported that two people have died in the city of Mangalore, following reports that police had used live gunfire to try and quell the protest there.

13:30 The BJP has announced that it will hold its only rally on Friday in Jaipur, the capital of northern Rajasthan state, after the Congress party government there made clear its opposition to the implementation of the CAA in the state.

12:54 Uttar Pradesh Chief Minister Yogi Adityanath, a member of the ruling BJP party, vowed revenged on protestors who caused damage. "Those involved in violence have been identified through video, CCTV footage." he said. “We will take revenge against them.”

12:37 CNN News 18 reports that police in the southern coastal city of Mangalore have resorted to gunfire in an attempt to subdue the crowds of demonstrators.

11:51 Chief minister of the state of West Bengal, Mamata Banerjee, spoke at a demonstration in Kolkata: "Suddenly after 73 years of independence, we have to prove that we are Indian...BJP is dividing the country. Don't stop your protest because we have to get CAA revoked."

11:31  G. Kishan Reddy, the Minister of State for Home Affairs, blamed opposition parties for the protests. "Some political parties trying to incite students, women in the name of religion," he said.

He added that there are only be a few violent incidents, in Delhi and Lucknow, that were now under control.

10:01 Chennai becomes the latest city where citizens take to the streets in spite of the ban on protests.

09:43 The protests in Lucknow, the capital of Uttar Pradesh, have turned violent, but police have not fired guns at protesters.

In India's capital, New Delhi, the airport announced that flights have to be delayed due to crews being stuck in massive traffic jams triggered by the protests.

Roads connecting New Delhi to the surrounding region have been sealed off to stop protesters reaching rallying sites.

Prominent political activist Yogendra Yadav was detained in New Delhi and told DW that the authorities would soon "realize the power of protests."

"This is not going to stop anytime soon and it will gain in momentum in the coming days," Yadav said.

"We are being detained, but these protests will carry on until this draconian act is dropped," said Communist party general secretary D. Raja.

09:40 independent Indian news outlet Scroll.in reports that BJP working President JP Nadda has doubled down on the CAA, and added that the National Registry of Citizens (NRC) will soon be implemented throughout the country.

Although this registry was originally mandated in India's citizenship act of 1955, it has not been implemented except in Assam, which has had problems with illegal immigration. Many fear that the registry will be used to target Muslims.

09:10 News agency ANI reports that the internet is also being cut in Sambhal, Uttar Pradesh.

09:00 Opposition lawmakers from the Congress party and the Samajwadi Party, which has its base in the northern border state of Uttar Pradesh, were protesting outside the legislative complex in the state's capital of Lucknow.

07:45 Indian journalists have reported that internet mobile services have been cut in large parts of New Delhi on government orders.

7:36 Protests have been continuing in several cities despite the ban, including in Delhi, Mumbai, Kolkata, Bangalore, Yamunanagar, Hyderabad, with police arresting dozens of demonstrations.

Prominent Indian historian Ramachandra Guha was detained by police in the middle of an interview during a protest at Bangalore's city hall. He said he was detained for "holding a photo of Mahatma Gandhi and talking to the press."

"Our paranoid rulers in Delhi are scared," Guha alleged before being whisked away by police.

7:00 The Dehli Metro Rail Corporation announces that at least seventeen metro stations are closed. This is likely to prevent protestors from reaching marches.

DW's editors send out a daily selection of the day's hard news and quality feature journalism. You can sign up to receive it directly here.