India′s BJP wants citizenship bill to counter mistakes in Assam’s NRC | Asia | An in-depth look at news from across the continent | DW | 11.10.2019

Assamese groups are against the final version of the citizens' list that excludes indigenous and Hindu communities. Now, New Delhi wants to introduce a citizenship bill to save "genuine" residents from deportation. 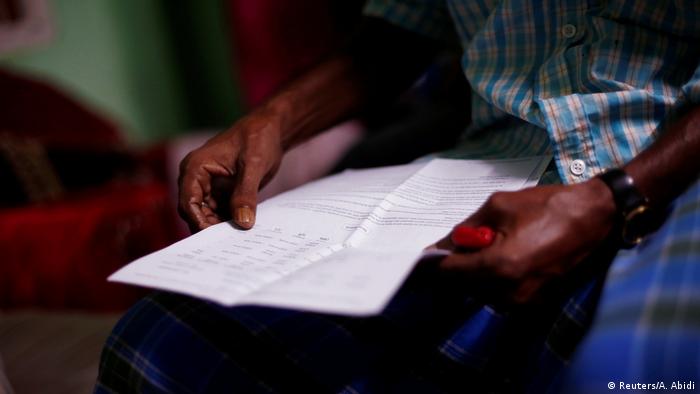 Nearly 2 million people in Assam are facing the threat of statelessness and detention after being excluded from the National Register of Citizens, an official list to root out illegal immigrants from Bangladesh. Most of these hope that Prime Minister Narendra Modi's government in New Delhi will offer succor.

In 2016, the party won the state elections in Assam, an event that signified the breakthrough of a national Indian party in the region. The BJP made this possible through the clever use of slogans urging people to protect the community's jati, mati, bheti [home, hearth and identity] from "illegal Bangladeshis."

To this effect, the party has consistently stressed upon the distinction between "infiltrators” - Muslims who emigrated from Bangladesh - and "refugees," or Hindus, Sikhs, Buddhist and Jains trying to escape persecution in their country of origin. According to the new Citizenship Amendment Bill proposed by the BJP government, these people will be granted citizenship if they prove they have been staying in India before December 31, 2014. 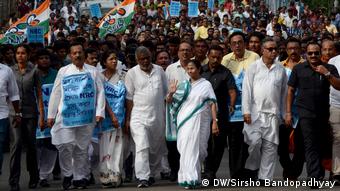 When a draft was released in 2018, 4.1 million people were left out and at risk of becoming stateless. Many of these were poor and illiterate members of the Muslim minority. However, the draft was revised and the final NRC published in August this year. This time, many of those excluded are Hindus or members of Assam's indigenous tribes.

"It is unfortunate that of the 1.9 million excluded, ethnic people have [also] been dropped from the NRC. Documents like migration certificates were not accepted by the authorities. We see the inclusion of foreigners, this is wrongful," state BJP President, Ranjeet Kumar Dass told DW.

Assam's Finance Minister Himanta Biswa Sarma, who left the Indian National Congress (INC) to join the BJP in 2016, said, "We are not interested in the NRC anymore. How is the rate of exclusion of people in districts bordering Bangladesh the lowest? Something is flawed." Sarma was referring to the districts of Dhubri, Karimganj and South Salmara, which border Bangladesh and receive the largest number of migrants from the country.

On the other hand, a majority of Hindus living in villages like Maloibari in central Assam have been left out of the National Register of Citizen. "Persons whose names have been excluded from the NRC, they committed suicide because they could not bear the tension. They were getting all facilities because their names were on the voters' lists," Babulal Kar, a health worker from Maloibari village told DW. Those not on the final list have no additional documents to show authorities aside from the ones submitted such as migration certificates, legacy data and land records.

The same is the case with people in the northern Assamese districts of Dibrugarh, Tinsukia and Sivasagar, which partly share their borders with Myanmar and the state of Arunachal Pradesh in India.

Meanwhile, opposition leaders and prominent civil society groups in Assam have begun to sense a paradigm shift in the ruling party's position from first enthusiastically supporting the NRC to now running it down for excluding genuine citizens.

Assam Public Works, the NGO that originally filed a petition in 2015 to update the National Register of Citizens and weed out illegal foreigners, has vowed to file an appeal against the final list in the Supreme Court of India.

Assamese nationalists, who also initially advocated updating the NRC, have been equally unhappy with the outcome of the exercise. The All Assam Student's Union (AASU), a signatory to the 1985 Assam Accord that first mooted the principle of the national register, accused the government of failing to provide indigenous people of the state a "foreigner-free NRC."

"This NRC is incomplete and full of inconsistencies. We demand a re-verification and will approach the Supreme Court," AASU general secretary Lurin Jyoti Gogoi told DW.

"Indigenous people and Indian citizens must be included in the NRC. Let the government set up a task force to identify the foreigners," Anup Chetia, general secretary of the pro-talks faction of United Liberation Front of Assam, a banned militant organization fighting for an independent Assam, told DW.

The BJP hopes to skirt this tricky situation and amend India's citizenship rules by introducing both the Citizenship Amendment Bill (CAB) and a citizens' list at the national level.

Some weeks earlier, India's Home Minister Amit Shah visited Assam to reassure people that his party would help those unjustly left out of the list. "I have come here to assure all my refugee brothers that there is no need to worry as the central government will not force them out of the country. Before NRC, we will bring the Citizenship Amendment Bill, which will ensure these people get Indian citizenship."

The CAB promises to give Indian citizenship to Hindus, Jains, Christians, Sikhs, Buddhists and Parsis, barring Muslims, from Bangladesh, Afghanistan and Pakistan after six years of residence in India instead of 11 years, which is the present norm under the Citizenship Act of 1955.

The bill was introduced in parliament in July 2016 but subsequently withdrawn because of objections. Now, Prime Minister Narendra Modi's government is seeking to introduce it again after it has been vetted by a joint parliamentary panel.

However, other northeast Indian states like Mizoram, which has a diverse indigenous community, have urged the government not to table the new citizenship bill, saying it will open a "floodgate” of illegal immigrants in the state.