Over four million people in the Indian state of Assam have been stripped of their citizenship, with rights groups claiming the government is targeting Muslims by using the pretext of tackling Bangladeshi immigrants. 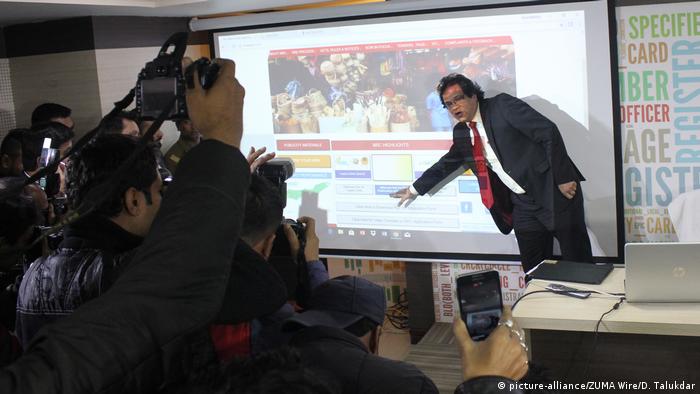 The worst fears of Mohammed Haq, a fisherman from Nalbari district in lower Assam, came true on Monday as the 56-year-old discovered that his name was missing from the National Register of Citizens' (NRC) draft list.

"I am worried and upset. I submitted all necessary documents to the authorities, yet my name is not on the list," Haq told DW.

Rubul Ali, a carpenter from Lakhimpur district finds himself in a similar situation. Ali traveled all the way to the state capital, Guwahati, on Monday, hoping to have his name mentioned on the list.

"Am I going to be stateless now? Will they put me in a detention camp? None of my family members is on the list either," Ali told DW.

Chaos and confusion have engulfed the northeastern state, which borders Bangladesh, as over four million people had their names excluded from the NRC list.

Ahead of the publication of the NRC draft list, the government had deployed thousands of security personnel to avoid any backlash from immigrants.

The list, which India's census chief released on Monday, excluded those unable to prove they or their parents arrived before March 1971 when Bangladesh was created.

Assam has been in the grip of social and communal tension as locals campaign against "illegal immigrants." Prime Minister Narendra Modi's Hindu nationalist government has backed the expulsion of migrants from Bangladesh.

According to the NRC, out of 32.9 million people in Assam, 28.9 million have made it to the draft citizens' list. 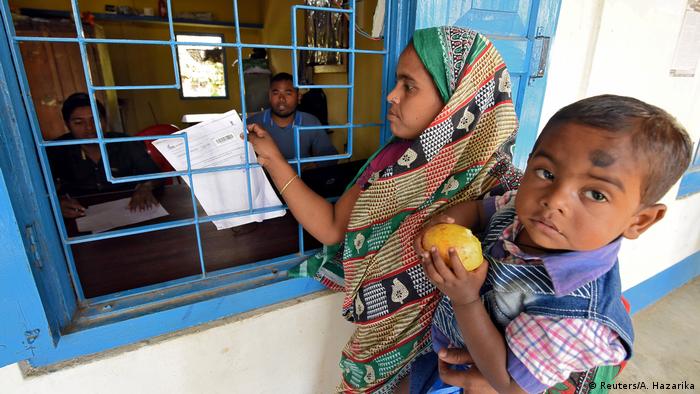 "The BJP is following the 'divide and rule' policy. Leaving so many people out of the draft list is a calculated plan ahead of the 2019 general elections," said Banerjee.

The Congress party urged the BJP government to ensure that no Indian citizen is left out of the final list.

"There are reports pouring in from all corners of Assam, of Indian citizens finding their names missing in the draft NRC, creating massive insecurity in the state," Rahul Gandhi, president of the Congress party, wrote on Facebook.

Many residents of Assam have long protested against the presence of "foreigners," which include both Hindus and Muslims. The All Assam Students' Union (AASU) has been spearheading an anti-immigrant movement in the state for many years.

For AASU, those who migrated to Assam during Bangladesh's independence from Pakistan in 1971 are "illegal citizens." Scores of Bengali-speaking people also migrated to Assam from then-East Pakistan after the 1947 partition of the Indian subcontinent.

In 2016, the BJP formed the state government in Assam and vowed to act against the "outsiders." It promised that all "illegal Bangladeshis" would be driven out of the state.

But the BJP government denied any systematic move to expel immigrants.

The Registrar General and Census Commissioner of India said that those who did not figure in the draft list have the right to file a complaint from August 30 to September 28. He promised that no citizen will be deprived of their rights. The government has set December 31 as the last date to complete the final list.

"Some people are unnecessarily trying to create an atmosphere of fear. This is a draft list, not the final list," said Home Minister Rajnath Singh.

But not everybody is convinced with the government's assurances. The Rights and Risks Analysis Group (RRAG), a human rights watchdog, said the NRC draft list is the biggest disenfranchisement exercise in human history.

"The government is stigmatizing a group of people. Are they going to deport them or will they put them in detention camps?" Mahua Moitra, an opposition legislator, told DW.

Ripun Bora, a Congress party legislator, told DW that religious minorities are being targeted in the state.

The issue is likely to fuel more tensions in the state, with political parties, including the ruling BJP, focused on winning the 2019 general elections.

Why is India's government trying to keep activist critics from traveling abroad? 12.04.2022

Indian authorities have used legal pretexts and instructed agencies to obstruct the travel of activists and journalists who criticize the government.