An effort by the state of Assam to tackle illegal immigration going back five decades has identified 1.9 million people who are ineligible for Indian citizenship. Critics say the list discriminates against Muslims.

The National Register of Citizens was published on Saturday, the result of what the government says was a yearslong effort to weed out illegal immigration in the remote southern Himalayan state.

The final list included 31.1 million legal residents. Most of the 1.9 million deemed ineligible are expected to turn out to be Muslim.

In a statement, the registry authorities insisted the process had been "carried out in an objective and transparent manner."

But critics of the list, including Himanta Biswa Sarma, a minister for the ruling Bharatiya Janata Party (BJP) in Assam, said it had left off "so many genuine Indians."

Assam has long seen large influxes of migrants, including Muslims from Bangladesh, which saw millions flee to India during the country's 1971 war of independence.

The flood of newcomers sparked decades of inter-religious and ethnic tensions that saw residents blame outsiders for stealing their jobs and land. The resentment prompted the state government to try to find a lasting solution.

Skeptics say the exercise, which is backed by the Hindu nationalist-led government of Prime Minister Narendra Modi, is an attempt to deport millions of minority Muslims.

Media reports say that there have been more than 40 cases of suicide due to concerns about loss of citizenship and detention. 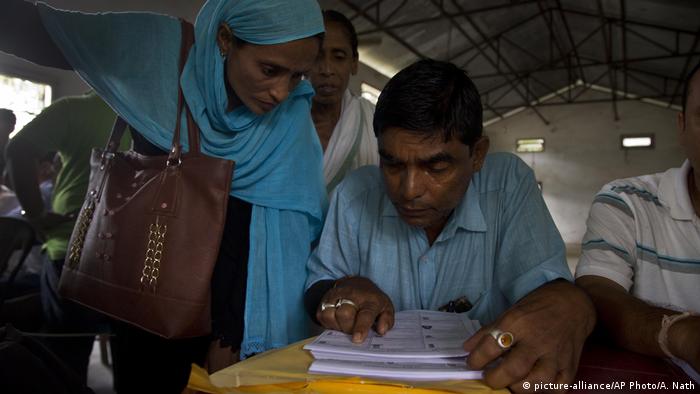 The list has been criticized for a huge number of mistakes, including leaving off large numbers of Muslims and Bengali-speaking Hindus

Officials checked documents submitted by roughly 33 million people for a draft list released last year, which left out more than 4 million residents of the state, many of them Hindu.

The final list now includes 31.1 million people, with 1.9 million excluded, Prateek Hajela, the coordinator of the state's register, said in a statement.

"Any person who is not satisfied with the outcome ... can file an appeal before the foreigners' tribunals," Hajela said.

Those excluded have 120 days to prove their citizenship at one of hundreds of regional quasi-judicial tribunals. If unsuccessful, they can still appeal to higher courts.

Read more: Access to health care a distant dream for most Indian women

All the same, high rates of illiteracy and a lack of any documentation among many residents are likely to complicate the process.

Officials in Assam say they do not know what will eventually be done with those finally adjudged foreigners. Bangladesh has not committed to accepting them.

More than 4 million people have been excluded from a controversial citizenship list in the Indian state of Assam and could face deportation. Authorities say the register aims to weed out illegal migrants from Bangladesh. (30.07.2018)