India′s Assam could plunge into chaos after final citizen list is released | Asia | An in-depth look at news from across the continent | DW | 30.08.2019

Experts and activists estimate that between 2 and 2.6 million people will be left out of Assam's final National Register of Citizens (NRC), to be released on August 30. The fate of these persons is still unknown. 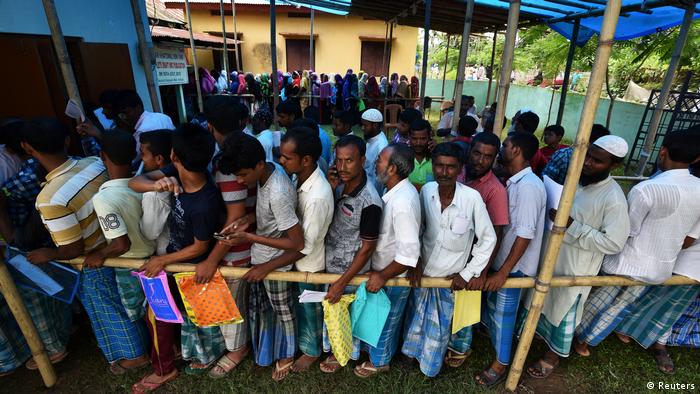 The National Register of Citizens (NRC) of Assam is a list of "genuine" Indian citizens living in the northeastern state of India. The first version of the list was made in 1951. The aim of the exercise is to update the old list and weed out illegal immigration from Bangladesh and neighboring countries into the region.

Around 4 million people living in Assam were not included in the final draft which was published last year in July. Following its release, people excluded from the list undertook a year-long process of filing claims and verifying their documents. On August 31, the government of Assam will release the final list of genuine citizens and although everyone seems to be on the same page regarding the possible deletion of a couple of million people, nobody seems to be know anything about the fate of this large chunk of Assam's population.

Even more confusing is the fact that nobody really knows what the authorities will do with the data that will be available after the five-year-long list-making ordeal. Then again, confusion and chaos have become the new normal in Assam when it comes to the NRC.

No solution to illegal immigration

In 2014, when the Supreme Court of India directed the authorities to begin the process of updating the 1951 version of the NRC, many including members of the ruling right-wing Bharatiya Janata Party (BJP) believed it would provide the "final solution" for Assam's illegal immigration problem, especially from neighboring Bangladesh.

Earlier this year, the central government in New Delhi also passed the Citizenship Amendment Bill, which relaxed conditions for non-Muslim immigrants, including Hindus, Zoroastrians, Sikhs, Buddhists and Jains from Afghanistan, Pakistan and Bangladesh to get Indian citizenship.

On August 1 this year, the Assam government published district-wise data of included and excluded people in the draft NRC and the results were surprising. The highest rate of exclusion was recorded in the Hindu-majority Hojai district (32.99%), whereas Muslim majority districts like Karimganj, Dhubri and South Salmara, which share their borders with Bangladesh, recorded much lower rates of exclusion

Speaking to DW, Sishir Dey, an advocate from Karimganj, confirmed that after the publication of the list on August 31, every excluded person would be handed a copy of the rejection order from the local NRC office. Following this, the person would have to appear in front of the Foreigner's Tribunal within 120 days to appeal against the exclusion. If successful, the person's name would be included in the NRC. If not, his or her fate would still be unclear. 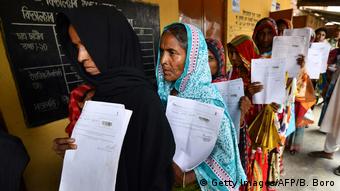 Millions have appealed against their exclusion from the list

Although there is a lot of confusion around possible outcomes, those excluded would have three possibilities. First, they could be housed in detention camps for which the government is acquiring land in Assam.

Second, the period of appeal could be extended to ensure "maximum inclusion of the supposedly legal," according to lawyers and experts. This step could further strengthen the already existing "document forgery mafia" in Assam and a surge in the trend of obtaining forged documents to prove one's citizenship could be likely.

Third, India's home ministry has assured people living in Assam that non-inclusion in NRC would not automatically transform one into a foreigner and that everyone could appeal against the decision in the Supreme Court. Only after a rejection by the top court could a person be finally termed as a foreigner.

However, there seems to be no plan regarding what would be done with so-called foreigners. A recent statement by India's External Affairs Minister, S. Jayashankar has added to the confusion. When asked by the journalists during Jaishankar's visit to Dhaka, the minister said that the NRC was an internal, domestic issue and that Bangladesh need not worry about it. Furthermore, India and Bangladesh are yet to sign any agreements on the repatriation of illegal immigrants from Bangladesh in India.

What happens after August 31?

The government, media and the people, all agree that after August 31, there will be confusion and chaos. Already, 55 people have allegedly lost their lives to the terror caused by the renewal of the NRC. A recent survey claims that around 89% of those who did not make it to the final draft of the NRC suffer from psychological stress, calling the process "mental torture."

These problems would continue if the authorities further delayed discussing a potential solution.

Ultimately, however, irrespective of the size of the excluded population on August 31, the key to resolving the crisis lies in the hands of people themselves. Initiatives in this context include voluntarily organizing support to the socioeconomically backward members of the "not on the list" group or actively filing Right to Information petitions to access viable legal options.