India citizenship bill ignites mass protest over migration fears | Asia | An in-depth look at news from across the continent | DW | 10.01.2019

In northeast India, protests have broken out over a bill that would grant citizenship to migrants from religious minority groups. Opponents say that the bill would endanger the region's "cultural identity." 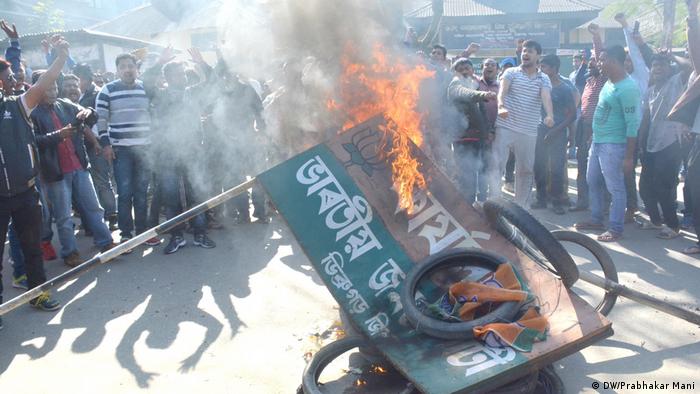 On Tuesday, India's lower house of parliament apporoved a bill that would grant citizenship rights to foreign Hindus and certain religious minorities, including Christians and Sikhs, who illegally entered India before December 2014 after fleeing Bangladesh, Pakistan and Afghanistan.

Although the bill still needs approval from the upper house before becoming law, widespread protests are now disrupting life in India's northeastern state of Assam. Roads have been blocked and public transport disrupted.

A peasant rights organization has also organized an "economic blockcade," which they say will not allow locally produced oil, petroleum products, coal, forest products and limestone to be transported from Assam. 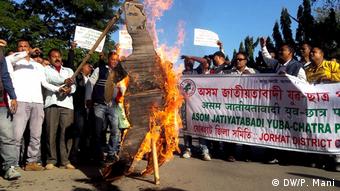 Critics have called the bill an attempt by the BJP to boost its Hindu voter base ahead of the upcoming general election due for May.

"The BJP are playing politics by creating sentiment among migrants to win political support," former Assam chief minister, Prafulla Kumar Mahanta, told DW, adding that a lot of people from Bangladesh would now come to settle in Assam. Assam shares a long border with Muslim-majority Bangladesh, although the bill does not grant citizenship rights to Muslim immigrants.

The bill has also been criticized for granting citizenship to unauthorized Hindus who had failed to prove their citizenship and were excluded from a draft National Register of Citizens (NRC) published last July.

At the time, around 4 million people failed to produce valid documents and were excluded from the citizenship list in Assam. Residents were asked to prove that they or their families lived in the country before March 1971, when a wave of people fleeing conflict in neighboring Bangladesh settled in the border state.

"It is absolutely clear that this bill targets specific groups and is bound to trigger a negative response," Suhas Chakma, director of the New Delhi-based Rights and Risks Analysis Group, told DW.

Regional 'identity' will be 'preserved'

Unfazed by criticism and protest, BJP Home Minister Rajnath Singh told parliament that the burden of supporting migrants would not be borne by Assam and the northeastern states alone.

"I assure the house that we are committed to preserve the northeast's identity and culture," he said.

The northeast region has a history of ethnic tension. The All Assam Students' Union (AASU), which helped organize the protests against the bill, has been spearheading anti-immigrant movements in Assam state.

In 2016, the BJP formed the state government in Assam and vowed to act against "outsiders." It promised that all "illegal Bangladeshis" would be driven out of the state.

Other state governments and groups in northeast have their own anxieties about the citizenship bill. For instance, Mizoram state is worried about an influx of Chakma, a Buddhist group based in Bangladesh.

BJP's allies in the region, including the National People's Party (NPP) in Meghalaya state and the Indigenous People's Front of Tripura state (IPFT), are vocally opposed to the bill over fears of preserving "indigenous" identity.

"Shouldn't we be concerned that any additional migration will further dilute the ethnic composition of tribal-dominated states?" Wasim Alam, an advocate from Guwahati in Assam, told DW.

With just a few months left for general elections, the ruling BJP has played a huge political gambit by introducing this contentious bill to parliament. Five years ago, the BJP had little or no presence in the seven states of the northeast India.

The BJP is currently either the ruling party or part of an alliance in most of the northeast states, except Mizoram. The region sends 25 MPs to the lower house of parliament in New Delhi, with 14 of them coming from Assam alone.