RSS – India′s Hindu nationalists spread their wings far and wide | Asia| An in-depth look at news from across the continent | DW | 09.07.2018

The Rashtriya Swayamsevak Sangh (RSS) is the ideological mentor to Prime Minister Narendra Modi's BJP party. It is increasingly playing an influential role both inside and outside government. Murali Krishnan reports. 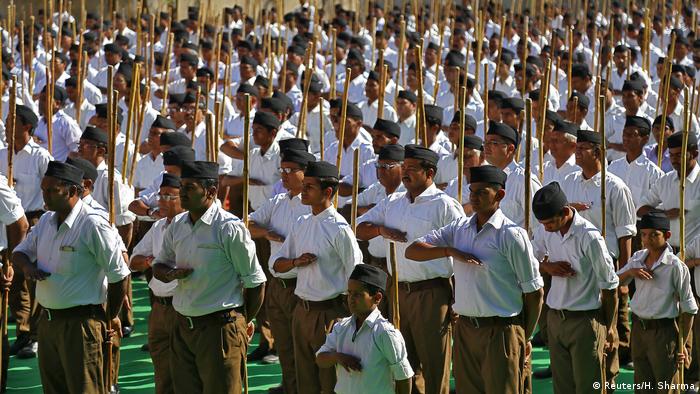 The Rashtriya Swayamsevak Sangh (RSS) is a Hindu umbrella group which is the ideological inspiration for PM Modi's rightwing Bharatiya Janata Party (BJP). RSS, which presents itself as a cultural organization, advocates a Hindu nationalistic agenda under the banner of "Hindutva" or "Hinduness."

Founded in 1925, the RSS today boasts six million active members. Most of the BJP's leaders, including Modi, have a long history as members of the volunteer movement. The group threw its weight behind Modi ahead of his crushing 2014 election victory over Congress.

Over the past couple of years, the organization has become even more influential and managed to place its ardent followers in the highest ranks of government. RSS says it has recently seen a spike in its membership requests, indicating its growing popularity among sections of the Indian populace.

"The RSS has always had a long-term plan. Today, it's in a position to influence the highest decision-making in the country and has its people in key positions in both government and outside. They believe in this robust nationalism," Rahul Gupta, an academic, told DW.

"Over the past four months, more than 125,000 urban dwellers have become members of the organization and many of them joined online," added Gupta.

Since its inception, the RSS has worked toward transforming India's Hindus from being a religious community into a political constituency. Observers say its aim is to establish Hindu hegemony in a Hindu-majority country, leaving religious minorities out in the cold.

"Our expansion is based on our core ideas and our modus operandi. We have developed a sustainable methodology," Rakesh Sinha, a spokesperson for the RSS, told DW. He dismissed rumors that the RSS instill fears in the minds of minority groups. 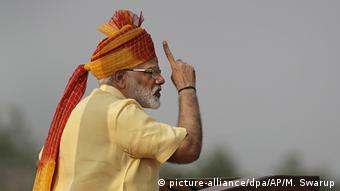 "Our nationalism is about the unity and integrity of our beloved motherland. It is about enlightening the people about the great traditions of 'Bharat' (a legendary Hindu king) and India's cultural heritage. Our aim is cultural unity," said lawyer Raghav Awasthi, a member of the RSS.

But critics are apprehensive about the RSS' growing presence and influence. They fear that the organization's clout will soon allow it to determine the nation's political discourse and direction, which could spell trouble for the country.

"The cow, beef and the Hindu god Ram are elements of that script, meant to be raised with an undertone of religion to create a mono-cultural Hindu identity. Identity politics is sought to be brought back into the political spectrum," argues social researcher Aakash Mehrotra.

"If the BJP wins the 2019 elections, the influence of the RSS will ensure further strengthening of Hindu chauvinism and the marginalization of Muslims and the rewriting of history. What we will see then is the reinvention of a mythical and glorious Hindu past picking up pace," political commentator Hartosh Singh Bal told DW.

Since the BJP came to power in 2014, several state governments have been accused of pushing an RSS-backed ideology in a number of areas, including education. A strong RSS influence seems to be guiding education policies, from the setting up of research chairs in universities to appointments made in the education sector.

In some BJP-ruled states, efforts are being made to revamp school curriculum in an attempt to recast Indian history through a Hindu perspective. The education wing of the RSS, the Bharatiya Sikshan Mandal, has long been urging the government to "Indianize" the education system.

"The RSS people are not going to have another such opportunity anytime soon. So they are going to make the most of it. They will seek to convert a number of people, who would otherwise be critical thinkers, into followers of one ideology," historian Romila Thapar told DW.

Opposition parties have accused Modi's government of attacking institutions and attempting to install people sympathetic to the RSS ideology even in the judiciary.

"They have filled educational institutions with RSS workers. Now they are making attempts to fill the judiciary with RSS or people with their thinking. If this happens, democracy will be weakened," said Congress leader Kapil Sibal.

Critics say the imprint of the RSS is seen even in cabinet reshuffles. Last year, when a big reshuffle took place, about half of the new or promoted ministers had strong RSS connections, they point out.

"Instead of implementing the many promises they made to the people procuring their mandate in the 2014 elections, the singular agenda that the Modi government is vigorously pursuing is to advance the RSS agenda," says Communist Party of India (Marxist) leader Sitaram Yechuri.

The BJP, however, dismisses such fears. "Opposition parties have a fear psychosis. They know they have little chance to dislodge our party, which rules in 21 states. A democracy has space for non-political actors," said BJP leader Sanjay Tandon.

The opposition leader is being sued for his comments accusing RSS of assassinating Indian freedom icon Mahatma Gandhi. The Gandhi scion, who heads the opposition Congress party, has pleaded not guilty. (12.06.2018)

Following her trip to the US, DW's Fanny Facsar headed to India to find out what's driving nationalism in one of Asia's most populous countries. She discovered that religion there can run deeper than democratic values. (21.08.2017)