Following her trip to the US, DW's Fanny Facsar headed to India to find out what's driving nationalism in one of Asia's most populous countries. She discovered that religion there can run deeper than democratic values. 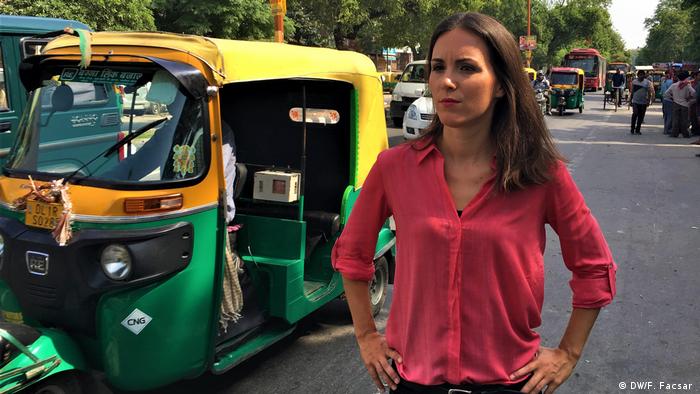 India was one of the stops on my global journey that I'd been looking forward to the most. For Europeans, the challenges facing Indian democracy are less well-known than, say, political polarization in the US.

India is massive, with more than 20 official languages, 29 states and 1.2 billion people. Its overall statistics make it perhaps most comparable with China, even though China is three times larger in terms of area.

As I arrive in New Delhi, I become immersed in a chaos of honking traffic and general noise. And compounding that chaos are thousands of cows - animals that are sacred to Hinduism, the religion to which 80 percent of India's population profess to adhere.

Cows have always been sacred in many states, but with the current Hindu government in office, the animals are being turned into political weapons. India has a federal system, so all states can decide for themselves if they want to ban the slaughter of cattle. But the government wants a nationwide ban. And everyone who opposes this move is considered anti-national.

Minorities feel insecure these days. And because of the size of the country, "minority" in India still means a huge group of people: Roughly 180 million people make up the Muslim minority, for example. And they have taken the full brunt of the proposed anti-slaughter ban. Several Muslims have already been killed by vigilantes on suspicion of having eaten beef or slaughtered a cow.

WorldLink: Cows under attack in India

As I meet young supporters of Prime Minister Narendra Modi at the University of Delhi, I realize that growing intolerance and religious tensions go way beyond cows.  When British India was divided into two countries in 1947 - Pakistan, an Islamic republic, and India, a secular country - relationships between Muslims and Hindus began to deteriorate. A lot of nationalistic Hindus reject the idea of post-colonial India as a secular country. They want a Hindu state, and with a Hindu government in office they believe this is possible.

Especially young people who voted for Modi. At the campus, I meet Lalit Tanwar, who is a member of a nationalistic student association affiliated with a radical organization, the RSS. The RSS is regarded as the ideological parent of the governing BJP party.

What astonishes me most during my conversation with Lalit is his attempt to convince me of the fact that he is liberal and modern. But that comes to a full stop when he talks about Muslims. "Hindu tradition was going on before Muslims came; it's always been a Hindu country. Therefore, we will not follow what is an outsider culture," he says.

Muslims have always been part of Indian culture. But they are perceived by Hindu nationalists as outsiders, as enemies that endanger the "true identity of India,” says Lalit. And that identity is a "purely Hindu” one. I meet up with Lalit again in his neighborhood as he prepares for Independence Day. The city is wallpapered with flags. And his home is wallpapered with saints and gods. He doesn't want to miss a word of Modi's speech. The prime minister is once again promising jobs and vows to protect India from external and internal enemies. 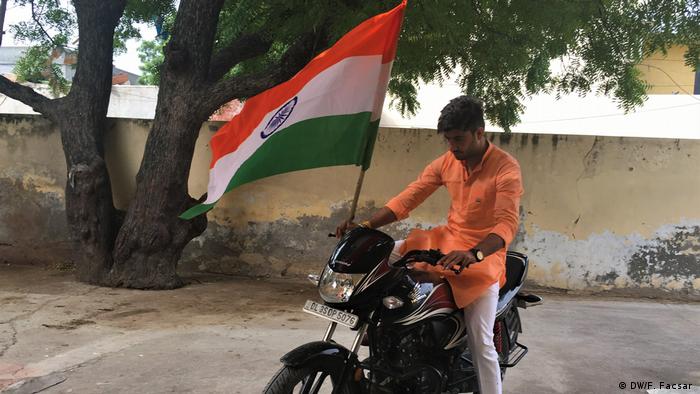 But amid growing Hindu nationalism, not everyone feels like celebrating Independence Day.  I receive tweets in which people express their concern about the lack of freedom of speech. Critics of Modi say that dissent is perceived as an internal enemy that needs to be eradicated.

So far, the job growth rate in India is close to zero. Modi is not delivering what he promised when he took office in 2014. And a lot wage laborers I meet on the streets of Delhi are affected. 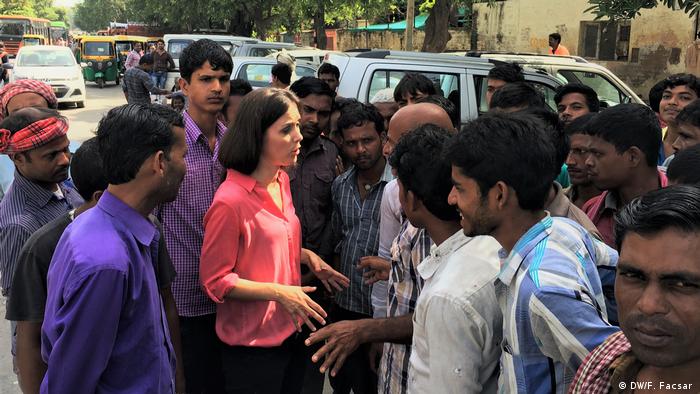 There is a lack of work, especially in the manufacturing sector that Modi promised to expand. And as Modi comes under growing pressure when it comes to jobs, his government is turning towards nationalism and using inflammatory rhetoric. This marginalizes minorities with the purpose of keeping the voter base happy, and of creating a feeling of belonging on the basis of the Hindu religion.

During my journey, I realize that although India is considered as the largest democracy in the world, there are emotions running deep below that democratic surface: emotions connected with religion.  "You can be re-elected many times just by giving people a sense of ethnic pride, religious pride, national pride, even though their material circumstances have not changed”, Rana Dasgupta tells me. He is a writer in Delhi and he is worried about the state of democracy in India.

It seems as if Modi, just like US President Donald Trump and many other world leaders, has hit on a political recipe in which nationalism is used as a way to maintain and increase power while challenging democratic values. Modi's style of nationalism may be more subtle than some others. He often talks about unity and development, but the underlying rhetoric of Hindu nationalism threatens to displace secularism as the founding principle of the country. India's democracy, and the values that come with it, will be tested as nationalism grows.