Citizens' groups in India are holding demonstrations in many cities to protest against the so called "beef lynching." Indian PM Modi has finally broken his silence over the issue. Murali Krishnan reports from New Delhi. 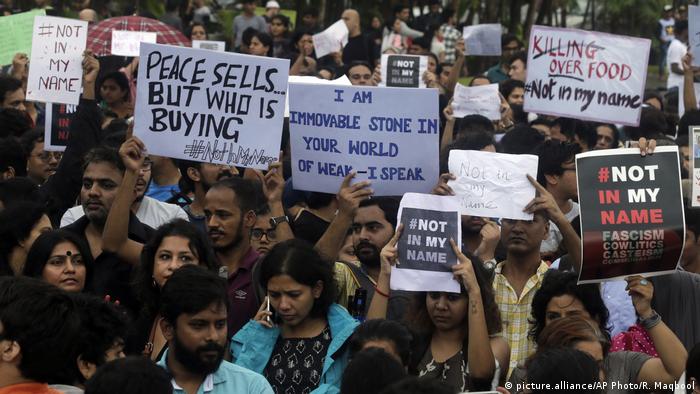 Indian civil society groups are protesting against the murder of Junaid Khan, a 16-year-old Muslim boy, who was stabbed to death on a train while he was returning home from Delhi on Thursday, June 22.

The "Not In My Name" demonstrations were held simultaneously in Delhi, Kolkata, Hyderabad, Thiruvananthapuram and Bengaluru on Wednesday. The organizers said the protests reflected "anger and grief" of Indian people irrespective of their religious associations.

The campaign seeks to "reclaim the constitution" and "resist the onslaught" on the right to life and equality.

Khan was allegedly killed because of his Muslim identity. Police officer Kamal Deep Goyal said that a group of more than a dozen men got into a brawl with Khan and his family due to an argument over seats in the train. They accused Khan and his family of carrying beef in their bags. The teenager was thrown off the train after being stabbed.

"They started abusing us, saying we were Muslims and traitors. They said we should go back to Pakistan," Junaid's brother Shakir told television channel CNN-News18.

Local police said one of the attackers had been arrested and others were being hunted.

The assault was the latest against Muslims who make up about 14 percent of India's 1.3 billion population. In April, a Muslim farmer was lynched in the northwestern state of Rajasthan for allegedly smuggling cows.

Cows are protected by law in many Muslim-majority Indian states. Additionally, Hindu extremists groups often use violence to protect the bovines and punish those who eat beef. At least 10 people have been killed in such incidents in the last two years.

Many observers believe that the extremists were boosted by the election of Indian nationalist Narendra Modi in 2014. The Indian prime minister has been sending mixed messages on the issue, slamming cow-protecting vigilantes but also appointing a right-wing Hindu priest to lead the country's most populous state of Uttar Pradesh. State police soon started closing down butcher shops over suspected slaughter of cows.

Hardline Hindu groups have called for a nationwide ban on killing cows in India.

But on Thursday, Indian Prime Minister Narendra Modi broke his silence and condemned the killings in the name of protecting cows.

"Killing people in the name of Gau Bhakti (cow worship) is not acceptable. This not something Mahatma Gandhi would approve," Modi said, referring to one of India's founders.

Modi expressed his "pain and anguish at the current environment" in India, listing incidents of vigilante violence.

"No person in this nation has the right to take the law into his or her own hands in this country. Violence has and never will solve any problem," the prime minister said.

In the grip of fear

"Why is there so much hatred against us? What did we do to deserve this treatment?" said Mausim, Khan's brother.

Fear and anger have gripped Indian Muslims over the rise in attacks by vigilante groups, who roam about highways inspecting livestock trucks for any trace of cows.

"These attacks against Muslims are part of a pattern that involves lower-caste Hindus and other disadvantaged minority groups across the country. The government has maintained silence over these attacks - a gesture that is being read as acquiescence," said filmmaker Saba Dewan, who is also one of the organizers of the "Not In My Name" demos.

Prominent Bollywood actors also took part in the "Not in my name" rallies.

But Yousuf Saeed, a Delhi-based filmmaker, says that while attacks on Muslims have spiked in India recently, their communal profiling, slurs and bullying on public transport is not a new phenomenon.

Many Muslims farmers and herders have lost their livelihood due to the fear of persecution.

"We are easy targets because of our appearance. They (vigilantes) can identify us as Muslims because of our skull caps. It can lead to problems," said Jamal Khan, a farmer in the northern state of Haryana.

"I return the award, which has lost all its credibility, in protest against the consistent attacks and killings of the members of the minority communities and total inaction, apathy and tacit support to the violent gangs by the government," said Hashmi.

The attacks have put Prime Minister Narendra Modi in a difficult position. His right-wing Bharatiya Janata Party, which is in power in states across the north, draws much of its support from Hindu nationalism.

His government has thus come under frequent criticism for emboldening extreme Hindu nationalists. In addition to the spate of cow vigilante violence, for instance, churches were vandalized and Christians attacked across the country in 2015.

In the face of growing condemnation last year, Modi lashed out at the "fake cow vigilantes" in August 2016. "I would like to tell these people that if you have any problem, if you have to attack, attack me," he said.

But his critics saw his comments as too little too late. "All this is just histrionics. Why has be not chosen to speak in parliament?" asked Mayawati, the head of the regional Bahujan Samaj Party. "This hooliganism could have been nipped in the bud a long time back. Why did he choose to be silent?"