Indian police launched a manhunt after a vigilante mob attacked a cattle truck and killed a Muslim man in the west of the country. Hindu extremists often roam the roads to protect cows, which they believe to be sacred. 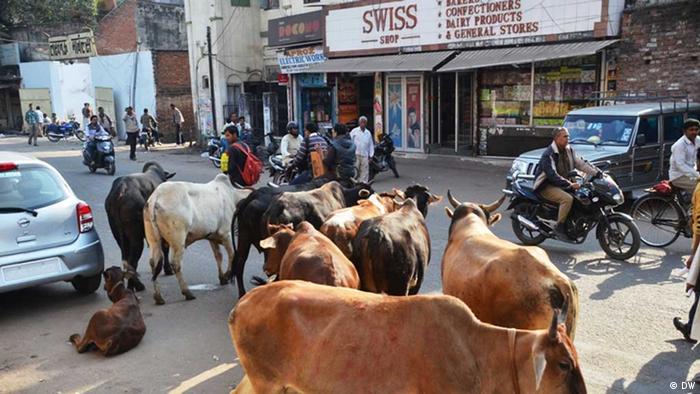 A 55-year-old man was killed and several others injured when they were assaulted by an angry mob in the state of Rajasthan, officials said on Wednesday.

The mob, reportedly counting in the hundreds, intercepted the cattle truck on a highway, and dragged out and assaulted the Muslims who were trying to transport the cows to their home state of Haryana. The religious extremists suspected that the Muslims were intending to slaughter the animals. Cows are sacred to India's Hindu majority.

At least seven people were hospitalized after the weekend attack, including the 55-year-old who later succumbed to his injuries, the police said. Authorities are now searching for five murder suspects who had allegedly beaten the victim to death.

At the same time, though, the authorities booked the group of Muslims under the Rajasthan Bovine Act, which foresees a prison term of up to 10 years for slaughter of cows.

Cows are protected by law in many Muslim states. Additionally, Hindu extremists groups often use violence to protect the bovines and punish those who eat beef. At least 10 people were killed in such incidents in the last two years.

In 2015, a group of Hindus lynched their neighbor over rumors of slaughtering a cow. Police later said the meat was mutton. In some Indian regions, vigilante squads roam highways inspecting vehicles for traces of the animal.

Many observers believe that the extremists were boosted by the election of Indian nationalist Narendra Modi in 2014. The Indian prime minister has been sending mixed messages on the issue, slamming cow-protecting vigilantes but also appointing a right-wing Hindu priest to lead the country's most popular state of Uttar Pradesh. State police soon started closing down butcher shops over suspected slaughter of cows.

Hardline Hindu groups have called for a nationwide ban on killing cows in the world's second most populous nation.