The opposition leader is being sued for his comments accusing RSS of assassinating Indian freedom icon Mahatma Gandhi. The Gandhi scion, who heads the opposition Congress party, has pleaded not guilty. 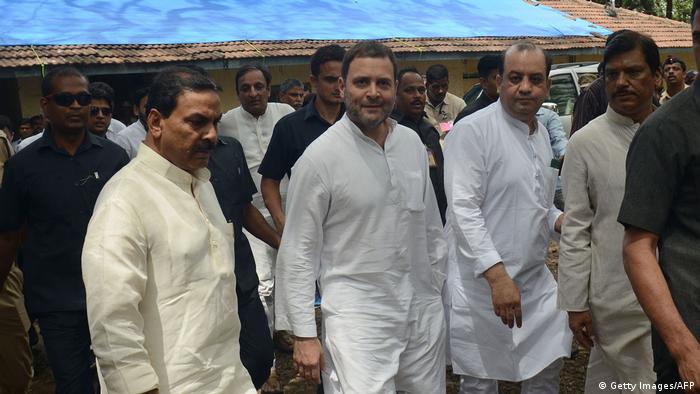 India's opposition leader Rahul Gandhi vowed on Tuesday to contest the defamation charges brought against him by a member of the Hindu nationalist group, Rashtriya Swayamsevak Sangh (RSS), whose name literally translates in English to the "National Volunteer Organization."

Gandhi, who heads the main opposition Congress party, pleaded not guilty to harming the reputation of the Hindu group, which is closely linked to the Prime Minister Narendra Modi's ruling party.

Gandhi stands accused of defaming the RSS — the organization which is the ideological inspiration for Modi's right-wing Bharatiya Janata Party (BJP) — when he said at an election rally in 2014 that the group was responsible for the assassination of Mahatma Gandhi, often referred to as the "Father of the Nation."

"My battle is ideological, and I will fight and win," Congress' party leader told reporters outside the courtroom in Maharashtra state, the heartland of the RSS.

Rahul Gandhi is unrelated to the icon of Indian independence struggle but he belongs to the influential Nehru-Gandhi family that has dominated Indian politics post freedom from British rule in 1947.

In 2016, Gandhi had requested India's Supreme Court to throw out the defamation case before agreeing to stand and defend himself against the charges.

Mahatma Gandhi was shot dead in 1948 by Nathuram Godse, a former member of the RSS.

The RSS has always distanced itself from the killing. The group was temporarily banned after the killing but subsequent probes could not find any evidence that the RSS had plotted the assassination or was aware of Godse's plans.

Founded in 1925, the RSS is now one of the most powerful organizations in the country with most of the BJP's leaders, including Modi, having a long history as members of the volunteer movement.

Its strong supporter base is often credited as a major reason behind Modi's spectacular performance in the 2014 general elections.

An attempt to amend a provision in the Indian constitution that allows only long-term residents of Kashmir to own land has sparked a controversy. Muslim groups consider it a bid to alter the state's demography. (17.08.2017)

India's aspirations 70 years ago and now

As India celebrates the 70th anniversary of its independence from British rule, many of the tasks the nation's founding fathers set for the leadership and people remain unfulfilled, says DW correspondent Kuldeep Kumar. (15.08.2017)

What does the future hold for the Gandhi dynasty?

Narendra Modi's recent landslide victory in India's general elections, humiliated the Congress Party, the political vehicle of the first family, the Gandhis, who have played a key role in the country since 1947. (29.05.2014)