Delhi riots: Book withdrawal sparks freedom of speech debate in India | Asia | An in-depth look at news from across the continent | DW | 02.09.2020

A renowned publisher last week withdrew the publication of a book on Delhi's communal riots, which claimed dozens of lives in India. The unreleased book blames Muslim students and secular activists for the violence. 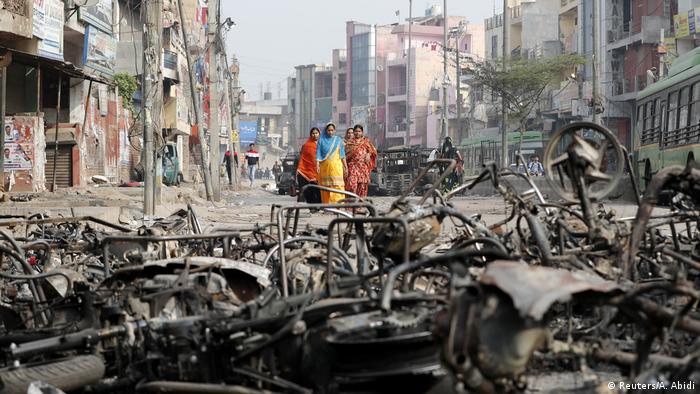 Last week, Bloomsbury India decided to not publish the book "Delhi Riots 2020: The Untold Story," which sheds light on the communal riots in the Indian capital earlier this year.

Written by Monika Arora, Sonali Chitalkar and Prerna Malhotra, the book puts the blame for the violence on Muslim students and secular activists.

More than 50 people, many of them Muslims, died in the riots in northeastern Delhi, and more than 500 were injured.

Rights group Amnesty International (AI) said in a statement on Friday that police in Delhi should be investigated for alleged human rights abuses committed during the riots that followed protests against a new citizenship law at the end of February.

No going back after deadly Delhi riots

AI said that speeches made by political leaders, including Mishra, helped fuel divisions during the Citizenship Amendment Act (CAA) protests.

The CAA, which was passed by India's parliament in December last year, offers easier citizenship options to non-Muslims fleeing religious persecution in three nearby countries: Afghanistan, Pakistan and Bangladesh. Critics say the law marginalizes India's Muslim minority, and its passing triggered outrage and protests across the country. The law marks the first time religion has openly been made a criterion for citizenship in India. Protesters reacted angrily, concerned that it threatens India's secular constitution and Indian-Muslim citizenship.

"In view of recent events, including a virtual pre-publication (book) launch organized without our knowledge by the authors and the participation of parties of whom the publishers would not have approved, we have decided to withdraw publication of the book," Bloomsbury said in a statement.

"Bloomsbury strongly supports freedom of speech but also has a deep sense of responsibility towards society," the publishing house added.

Author Arora blamed "leftist-fascists" for pressuring the publisher to withdraw the book.

Authors for and against Bloomsbury's decision

Several authors have threatened to boycott Bloomsbury India and end their relationship with the publisher following the incident.

"This is obviously not a quality control problem but about censorship," tweeted author and economist Sanjeev Sanyal.

Biochemistry professor Anand Ranganathan condemned the decision, saying he would return the advance payment to Bloomsbury for his upcoming book, "Forgotten Heroes of Indian Science."

Makarand Paranjpe, the director of the Indian Institute of Advanced Study, believes that the decision to withdraw the Delhi riots book has severely damaged the reputation of the publisher.

But some activists are of the view that although censorship needs to be condemned, Indian writers should also take a stand against those who stoke communal sentiments.

"It is about defending literature from fascism. It is also about standing up against religious divide, hate speech, Islamophobia and false history," critically acclaimed writer and activist Meena Kandamswamy told DW.

In her tweet, economist Jayati Ghosh criticized Bloomsbury for approving the publication of "Delhi Riots 2020: The Untold Story" in the first place.

"When the history of our times is written, the role of publishers who colluded and published falsehoods to serve current powers will also be noted. Shame on you. You're no longer a credible publisher," said Ghosh of Bloomsbury India.

Rakesh Batabyal, a historian at Delhi's Jawaharlal Nehru University, told DW that it has become "convenient" to stifle multiple viewpoints in India.

"A colonial-era sedition law is still in place in India. It is used indiscriminately by the state against dissidents," he said.

Ravi Nair, director of the South Asia Human Rights Documentation Center, is of the view that the freedom of speech and expression should not be undermined in a democratic country.

"We see that activists and academics are being arrested across the country," Ravi told DW.

But some authors and politicians believe that all Indian liberals are quite selective in their criticism of censorship.

"The Delhi riots book episode highlights double standards of leftists and liberals. They are not ready to accept the narrative of the other side of the political spectrum," Rakesh Sinha, a BJP lawmaker, told DW.

Author Amish Tripathi shares the same view on this issue: "If you are an author and you believe that only books endorsing your ideological views should be published, then you are an extremist," Tripathi tweeted.

BJP supporters believe that liberals control the publishing industry in India and forced Bloomsbury to withdraw the Delhi riots book that presented a different aspect of the issue.

History of censorship in India

Censorship of books is not uncommon in India. Apart from governmental interventions, books have also been barred by legal action or threats by organized groups on accounts of being "anti-national" or "harmful for society."

In 2014, Penguin India decided to withdraw the publication of historian Wendy Doniger's "The Hindus: An Alternative History," after a legal challenge was mounted by a Hindu group that objected to the book's description of mythological texts as fictional, claiming it hurt the religious feelings of millions of Hindus. Arora, author of the Delhi riots book, backed the legal battle against Doniger's book.

In the 1980s, author Salman Rushdie's novel "The Satanic Verses" was banned in India as it contained anti-Islam content.

Similarly, another book, "Understanding Islam through Hadis" by Ram Swarup, which was first published in the US in 1982, was eventually banned in India after protests by the Muslim community.

With its architecture, literature and yoga poses, India is famous for diversity. But no matter how rich its culture may be, thinking outside the box is not exactly welcome, especially when it comes to religion and sex.