Delhi riots: Victims struggle to rebuild their lives | Asia| An in-depth look at news from across the continent | DW | 20.03.2020

Homeless survivors of last month's New Delhi riots now face an uncertain future in squalid camps as they wait for help. DW spoke with volunteers and people living in the camps. 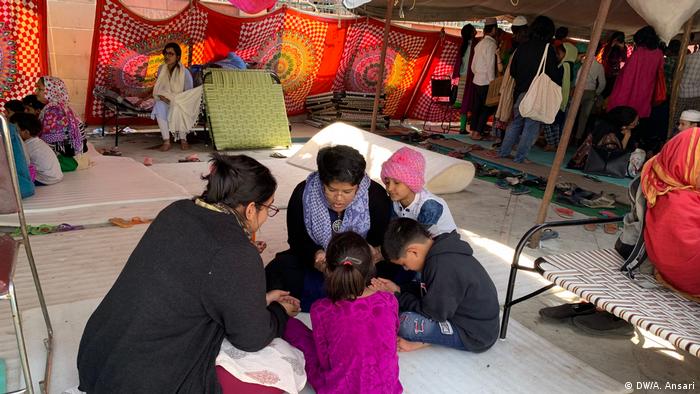 A few weeks have passed since violent mobs rampaged through neighborhoods on the outskirts of New Delhi, leaving death and destruction in their wake. According to official numbers, 53 people were killed and over 200 were injured. Hundreds of houses and shops were set on fire, along with thousands of vehicles.

For some of those who lived through the riots, the suffering continues, as they have lost everything they owned. Thousands of these people are now living in "homeless camps," with no sign if their lives will ever return to normal.

DW visited one of these camps located in northeast New Delhi's Mustafabad. Walking to the site of the camp felt like visiting a live museum to the extent of the violence that rocked the neighborhood, with remnants of the riots found in the canals and damaged buildings.

No going back after deadly Delhi riots

The camp was constructed by the city government on the grounds of a local mosque, and an estimated 1,200 people have been living here since February 28. A staff of volunteers keeps it running, and teams of doctors, therapists and lawyers provide assistance to those in need.

Besides physical wounds, many of the survivors are suffering from mental trauma. Anxiety is in the air when one enters the camp and it can be seen in people's faces, including children.

People live close together in makeshift tents, including only bare essentials and no furniture other than a bed. Women and children live separately from the men.

No way back home

The Delhi Minorities Commission, a government agency that protects the interests of religious minorities, has been counselling those living in the camps, while helping children deal with stress. Bartika, a volunteer, told DW that several of them have lost their family members.

Many young students are also wondering how they can continue their studies after their books and notes were destroyed along with their homes. "We are trying to help them as much as possible," said Bartika, adding that many Muslim youngsters are afraid of being ostracized if and when they return to classes.

Saiful Islam, a teenage student, is not so keen on going back to his school, and he is unsure if he will be accepted by the community, as tension between Hindus and Muslims continues. Islam also told DW that many of those living in the camp are not sure if they will ever be able to return home.

Livelihoods up in smoke

"When will we go back to our neighborhood and who will provide us money to reconstruct our homes?" said Firoz Akhtar, who tried to return home after the riots, but found nothing left. "Nothing is left of our home, not even the roof. Everything has been blown away using a gas cylinder," he told DW.

He had no other option but to return to the camp. Firoz had run a small shop adjacent to his house. That was his family's only income, and it has been destroyed, he said.

Another camp-dweller, 75-year-old Rubina Khatun, said she has lost hope for the future. Her family made a living with a dairy business. When the riots broke out in her neighborhood, she had to leave the family's 21 cows behind and flee for safety.

"After the violence stopped, I rushed back home to fetch my cows, but there were none to be found," she told DW. "Amid the heap of destruction, just two of our cows could be traced. One of them had lost both its eyes, and the other was limping around the neighborhood with a broken leg.

"The jewelry and money that I saved for my granddaughter's wedding were also stolen. I can't imagine that things will ever return to normal. I don't want to live any longer," said Khatun.

Some of the families were told that some government support will be provided to help them set up their houses again, but there is no sign of it yet. The camp's volunteers said a feeling of hopelessness is growing with each passing day.

Still, all of the volunteers, lawyers and doctors are trying their best to help these people. Medical supervisor Angshu Antony said: "We have been running a medical tent here for two weeks. During the riots, tear gas was used extensively. Many of the camp-dwellers are still struggling with the effects of the gas."

Antony said that many people continue to have trouble breathing. As the new coronavirus spreads in New Delhi, there are concerns that the camp could be vulnerable. According to another volunteer doctor, there are so far no cases of COVID-19 in the camp.

"But under such circumstances, if any of the camp-dwellers get infected, it will be very difficult to control the situation here," he said.

As for the future of those living in the camp, many questions remain unanswered. Authorities had promised that arrangements would be made to take the riot survivors home immediately after the Holi festival last week.

But it is unclear where the people will go, as their homes have all been destroyed.

"People from these neighborhoods may continue staying in the camps as long as they need to. The government is ready to provide aid," said Arvind Kejriwal, Delhi's chief minister.

However, a prolonged stay in a squalid camp is a questionable solution to the problem.

"No one can continue living in such conditions. Immediate arrangements must be made to help the camp-dwellers return to their homes." MR Shamshad, a Supreme Court lawyer, told DW.

Families have been forced to leave their homes as clashes between Hindu and Muslim groups have turned deadly in the Indian capital. There have been reports of Hindu mobs targeting Muslim neighborhoods. (27.02.2020)