Indian Muslims fear for their lives after sectarian riots grip New Delhi | Asia | An in-depth look at news from across the continent | DW | 27.02.2020

Families have been forced to leave their homes as clashes between Hindu and Muslim groups have turned deadly in the Indian capital. There have been reports of Hindu mobs targeting Muslim neighborhoods. 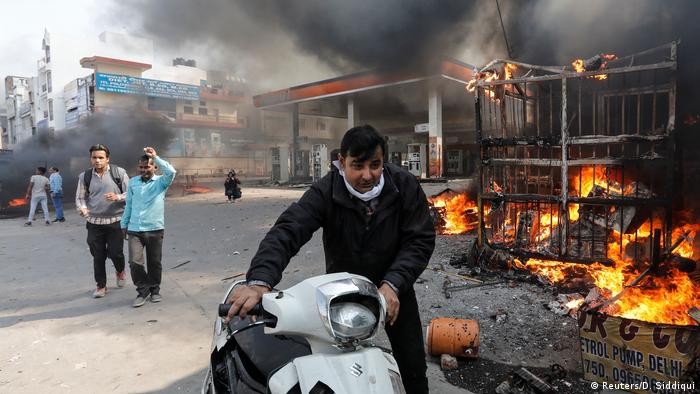 There was an uneasy calm on Thursday in New Delhi following days of riots, arson and vandalism that have left over 30 people dead and 250 injured in the worst violence to strike the city in decades.

The protests are the latest bout of civil unrest over a controversial citizenship law known as the Citizenship Amendment Act (CAA). Indian Muslims are concerned the law would turn them into second class citizens.

The unrest began late Sunday and gradually disintegrated into sectarian violence as Hindus, who overwhelmingly support the law, and Muslims, who oppose it, began attacking each other.

"We know that these apps provide details of car owners and it can be easily downloaded," one intelligence official said.

Streets were littered with stones and glass and burned vehicles. The stench of smoke from burning buildings filled the air.

Many families have begun to move out of these neighborhoods. Three days of nearly continuous violence with little or no police protection have left them feeling vulnerable and frightened. 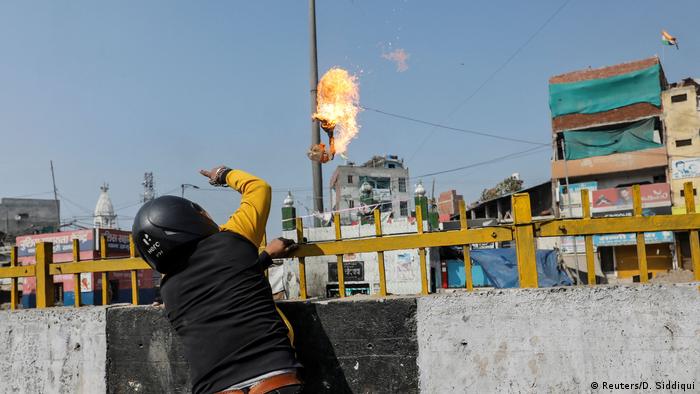 Parvez Ahmed, a car mechanic in Jaffrabad, took his family and left their apartment on Wednesday.

"We have lived in fear for three days, not knowing if we would come out alive as marauding mobs roamed our neighborhood. The family is just happy to be alive," Ahmed told DW.

Naem Khan, a butcher in Maujpur, decided to pack his belongings and flee over 1,000 kilometers (600 miles) to the Indian state of Bihar along with his wife and daughter.

"It is shameful what has happened over the past three days. We saw our neighbor being killed. It is a miracle that we came out," a visibly shaken Khan told DW.

Other families have lost their homes to looting or arson and have no place to go.

"Our house has been completely destroyed and we have lost all our belongings. Where do we go?" said Fatima Begum.

A mob attacked the town of Gokulpuri in northeast New Delhi on Tuesday, setting buildings on fire with Molotov cocktails. One shopkeeper called it a "free for all."

"Apart from shops and houses being burnt down, more than 50 cars were gutted, petrol pumps were set ablaze and property damaged," said Majeed, a resident.

"The gangs that attacked and vandalized knew who they were after and it was carried out with some degree of planning. In many cases we see specific targeting," a senior police officer told DW, on condition of anonymity as he was not authorized to speak to the media.

In the Seelampur neighborhood, some people raised Hindu nationalist BJP party-colored saffron flags to show that Hindus live there. A Muslim-majority neighborhood is located next to Seelampur.

Outside the Guru Teg Bahadur hospital mortuary in the northeast Shahdara area, several families were waiting to identify the bodies of loved ones. Many were scared to go back home.

"I have been camping here at the hospital premises. I want my son's body so I can perform his cremation," said Shan Mohammed, whose son died of multiple stab wounds.

"There are people provoking riots"

Authorities at the hospital said they are struggling to cope with the number of victims coming in following the riots.

Ineffective response by the government?

Although a massvie deployment of security forces helped restore calm on Thursday, eyewitnesses have criticized authorities for taking too long to respond and stop the violence. Many people have accused the police of turning a blind eye to violence in Muslim neighborhoods.

"The Delhi police is one of the most well-equipped police forces in the country and clearly this episode of wide-scale rioting and arson has not shown them in a good light," said Prakash Singh, chairman of the Indian Police Foundation.

Though hundreds of police and paramilitary personnel were patrolling the streets of New Delhi to bring about some sense of normalcy and keep the peace, many said the response was too little, too late.

"There are enough forces on the ground and no one needs to fear," National Security Adviser Ajit Doval told NDTV news channel, and asked the people of New Delhi to trust "the man in uniform."

Doval was responding to accusations that police were not doing enough to help those under attack.

More than 50 police officers have been reported injured so far during the unrest. A head constable was killed.

On Thursday, the opposition Congress party led a meeting with Indian President Ram Nath Kovind to address the deadly violence.

Interim Congress chief Sonia Gandhi accused the New Dehli government of being "mute spectators" as the riots grew out of control.

The Delhi High Court has reportedly given New Delhi's leadership one month to provide a plan on taking action towards the kind of hate speech that allegedly incited the violence.