As the death toll rose above 20 in New Delhi after violence this week, Prime Minister Narendra Modi has appealed for calm, while Delhi's chief minister has been calling for a curfew. 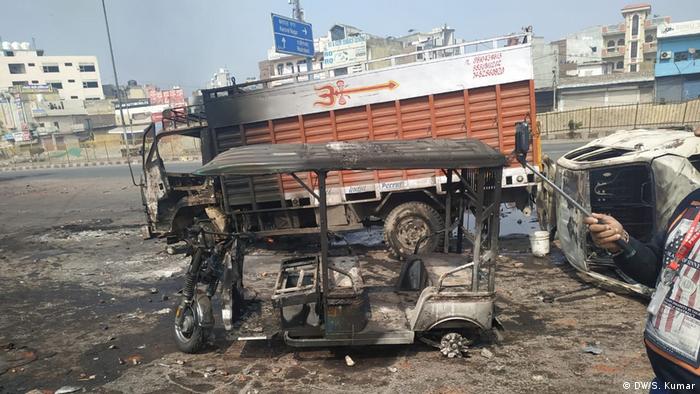 After two days of violence over a contentious citizenship law in India claimed at least 20 lives and injured around 200 people, Prime Minister Narendra Modi commented for the first time on Wednesday, tweeting a call for calm.

Earlier Delhi's chief minister Arvind Kejriwal took to Twitter to call on the Indian government to impose a curfew and deploy the army in areas of the capital that had been affected.

Notably, while the Delhi governmet is headed by Kejriwal, the Delhi Police is under the direct control of the Ministry of Home Affairs — led by Amit Shah, who is from a rival party.

Several high-level meetings have taken place over the last 24 hours and a meeting of Prime Minister Narendra Modi's senior ministers is slated for later on Wednesday.

A midnight hearing at the Delhi High Court saw the judiciary directing the police to "ensure safe passage [to hospitals] for the injured victims by deploying all resources," according to Indian news agency ANI.

A shaky semblance of calm was restored in New Delhi on Wednesday morning, immediately after US President Donald Trump left the country following a 36-hour visit.

The Delhi Metro Rail Corporation reopened all stations, after several stops were closed across Monday and Tuesday when groups protesting for and against the Citizenship Amendment Act (CAA) clashed in several parts of northeast Delhi.

At the same time, many locals gathered at India Gate to appeal for peace after one of the worst incidences of violence since the protests against the bill started in December last year.

Schools in northeast Delhi remain shut, with the national board, the CBSE, postponing year-end graduation examinations for students in the area.

The country's Information and Broadcasting Ministry also put out an advisory urging all private media not to publish content that incites violence, spreads "anti-national attitudes," or promotes "communal attitudes."

The state borders near the affected area have been closed.

Eds: This is an updated version of an earlier article.

Police in New Delhi are using facial recognition to identify protesters. Activists are worried about the lack of regulation around the technology. They are also sharing tips on evading detection. (18.02.2020)