India citizenship law protests spearheaded by women | Asia | An in-depth look at news from across the continent | DW | 22.01.2020 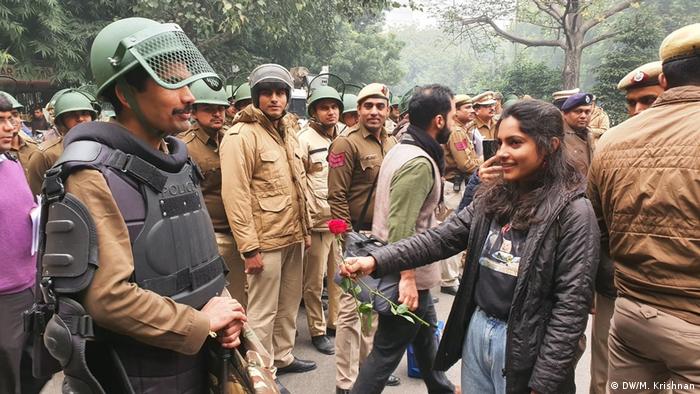 Shaheen Bagh, a working-class Muslim-majority neighborhood in India's capital, New Delhi, is ground zero of a protest movement against a controversial citizenship lawenacted by the government in late 2019.

Groups of women in Shaheen Bagh, and across India, have been keeping the protest movement alive by organizing rallies and spreading the demonstrators' message.

Regardless of age, religion or occupation, the nationwide protests have seen women taking to the streets to express their dissent.

During a recent protest rally in expected to last through the night, a group of female volunteers of all ages assists in preparation by providing hot tea, handing out pamphlets and laying out duvets in the corners for people to get some rest.

"You can see that many of us come from varied backgrounds. But what unites us is the opposition to this discriminatory law. It goes against the country's secular Constitution. The BJP does not decide who stays and who goes," said Shaila Khan, a lawyer.

For over a month, protesters have risen up across India in opposition to the Citizenship Amendment Act (CAA), which was introduced by the country's Hindu nationalist Bharatiya Janata Party (BJP). Nearly 30 people have died in violence surrounding the protests.

The CAA would provide a fast-track to Indian citizenship to non-Muslim refugees from Bangladesh, Afghanistan and Pakistan. Many consider the CAA to be discriminatory against Muslims.

In Shaheen Bagh, what began as a small, peaceful sit-in and candlelit vigil organized by local women, has grown into regular large-scale demonstrations. The demonstrations regularly attract up to 20,000 people. A recent weekend demonstration marking a month of protest drew more than 150,000 people.

Protesters have even blocked a major highway connecting the Indian capital to the suburb of Noida.

"Despite the threat of a forceful eviction, which we fear, we are still holding on. Our unity keeps us brave and determined," said Iram Azmi, a college student.

"We see similar demonstrations springing up all over the country, and the determination of these young women is made visible by these ongoing protests. Women are rewriting the grammar of politics," Yogendra Yadav, political activist and president of the political protest group Swaraj India, told DW.

In the capital, female students at Jamia Millia Islamia University were seen protecting their male counterparts from police attacks.

Female students in the southern city of Puducherry used their convocation ceremonies to make statements against the CSS. In other cases, women leading protests offered flowers to the police as a mark of peaceful resistance.

However, many protests have turned violent. Police have resorted to baton charges, and women have been mercilessly targeted — both during protests and while in police custody.

Shocking images from the past month have confirmed that India's political culture is changing.

"I was brutally beaten up in police custody at the police station. Even the male cops had beaten me up. Male police officers kicked me and called me Pakistani. My family was not informed about my arrest," social activist Sadaf Jafar told DW.

Why are India's women taking the lead?

Indianpolitical pundits say that these young women leading protests are often the first generation in their families to have a college education.

"Anything that threatens the possibility of filling their aspirations and mobility motivates them to protest against what they feel is a discriminatory law," said Sangbida Lahiri, a doctoral student at the University of Calcutta.

Furthermore, women across various socioeconomic markers are often deprived of official documentation. If the CAA is enforced, it is the poor who will have to scramble to obtain documentation proving they are Indian and belong to the country.

"We saw what happened is the northeastern state of Assam when over 1.9 million people were rendered stateless after the publication of the national citizens register," said Sana Altaf, a doctor who has participated in the protests. "The majority of them were women. We cannot have a repeat of this across the country."

This recent wave of protest is not the first time Indian women have taken to the streets to have their voice heard.

There have been several movements in the past. But given the pan-India presence of the escalating anti-CAA movement, their presence has captured the public imagination.