India's ruling party has delivered on its promise to revoke the special autonomous status for Jammu and Kashmir. It is a risky move, but there is a clear rationale behind it, says DW's Rodion Ebbighausen. 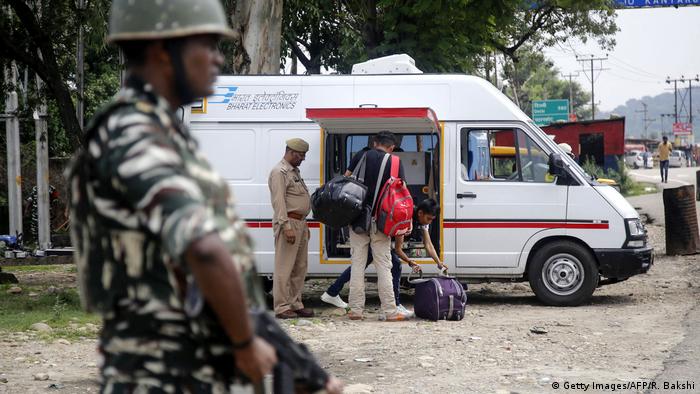 India's ruling Bharatiya Janata Party (BJP), under the leadership of Prime Minister Narendra Modi, delivered on an old election promise on Monday. It revoked a part of the constitution that affords special autonomous status to the contested Jammu and Kashmir region. A new law was also proposed in Parliament to split the state into two regions directly ruled by New Delhi.

India's government knows full well how dangerous this move is. It could reignite decades of strife in a region that has been plagued by terrorism, police brutality and human rights violations perpetrated on all sides. It was clear in the days leading up to the announcement that New Delhi expected this could happen. It urged Hindu pilgrims to leave the region, dispatched tens of thousands of soldiers there and imposed a broad communications embargo across the region hours before the controversial announcement.

Rodion Ebbighausen is an editor with DW's Asia desk.

The decision will anger Kashmir's Muslim majority and the region's political representatives. There have been cautious attempts to promote dialogue between both sides in the past — but the government's move to revoke Kashmir's special status means talks will now become impossible.

The emotive Kashmir question is likely to polarize political discourse, too. Just after the BJP announced its decision, India's opposition Congress Party branded it a "catastrophic step." The BJP, in turn, will know how to capitalize on this. And Indians will find themselves confronted by the question of whether they back India, or support Kashmir separatism. Political discourse on the matter has lost its nuance and become rather black and white.

What do the populist nationalists hope to gain?

The BJP is apparently willing to pay the price of renewed violence, fully alienating Kashmir and stoking polarization. But why?

Firstly, the party believes it can quell a possible new outbreak of violence by deploying large numbers of security personnel. Secondly, it is convinced that by supporting Hindus and Hinduism it can create stability — though this stability will be based on intimidation. And finally, political polarization benefits populist Hindu nationalists.

US lawmakers meet Taiwan president amid China anger 50m ago

Spain: About 1,500 evacuated from towns near Zaragoza due to fires 9h ago

Norway euthanizes Freya — the walrus that drew crowds 13h ago

US lawmakers in Taiwan on heels of Pelosi visit 14h ago

Opinion: India's 75th anniversary — from snake charmers to a global superpower 9h ago