Why are attacks on Christians increasing in India?

A surge in attacks on Christians in India is part of a much broader malaise, experts say. "The objective is clear: to isolate and demonize minorities so that a Hindu state is established," a political scientist told DW. 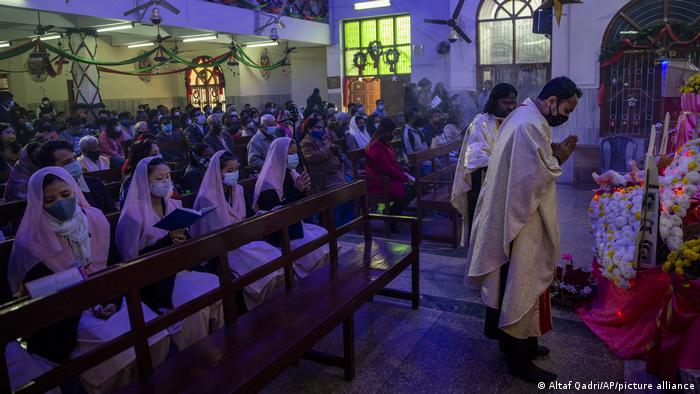 Like many minorities in India, Christians are subjected to increasing levels of violence

The attacks on Christians, who make up about 2% of India's more than 1.3 billion people, are part of a broader shift in which minorities have been made further unsafe.

In the run-up to Christmas the incidents spiraled, with critics accusing the authorities of turning a blind eye to them.

A pattern in attacks

In Agra, the city of the Taj Mahal, members of right-wing Hindu groups burned effigies of Santa Claus outside missionary-led schools and accused Christian missionaries of using Christmas celebrations to bait people.

Protesters entered a Presbyterian church on Christmas night in Assam and disrupted proceedings, demanding that all Hindus leave the building. On Christmas Eve, a celebration at a school in Haryana's Pataudi town was disrupted by members of a right-wing Hindu vigilante group who stormed into a school shouting pro-Hindu slogans.

India looks back at its deadly second COVID wave

Earlier this month, a Catholic school in central Madhya Pradesh state was vandalized by a mob of about 500 Hindu extremists, despite school authorities' requesting police protection prior to the attack. The mob was armed with iron rods and stones, and chanted "Jai Shri Ram" (Hail to Lord Ram) while damaging school property.

All the attacks have a seemingly disturbing pattern coinciding with renewed attention on a long-standing claim from right-wing Hindu groups that a string of forced conversions is taking place. This claim has been vehemently denied and there have yet to be any incidents investigated by the police.

A report released by the joint initiative of the United Christians Forum, Association for Protection of Civil Rights and United Against Hate revealed that at least 305 incidents of violence against Christians took place within the first nine months of 2021. This includes at least 32 incidents in southern Karnataka state.

"These attacks have a discernible pattern, and the attempt is to polarize the atmosphere as well as put minorities in their place," Father Pius Malekandathil, a historian, told DW. "Hate crimes like targeting visible targets like churches and educational institutions are a way to seek attention and put the scare in the community."

Political scientist Zoya Hasan told DW that the subjugation of minorities, especially Muslims, in recent years is part of a growing atmosphere of religious intolerance.

"The objective is clear. This plan would translate to isolating and demonizing minorities so that the Hindu order is consolidated and a Hindu state is established," Hasan said. "It is well thought of and purposeful."

Since the BJP came to power in 2014, attacks on Christians have been on the rise. According to a report by Persecution Relief, a non-profit that monitors violence against Christians, crimes against the community increased by 60% from 2016 to 2019.

In some states, Christian churches have been vandalized. In others, pastors have been beaten and abused. Congregations have been broken up by mobs and believers hospitalized with injuries.

At least nine Indian states have planned anti-conversion laws. Karnataka recently passed the Protection of Right to Freedom of Religion Bill that has several stringent provisions including 10-year imprisonment for conversion by "fraud or inducement."

In October, two Franciscan nuns waiting at a bus stop in Uttar Pradesh were stopped by Hindu groups and forcibly taken to a police station. The nuns were picked up along with a group of evangelical Christians, who had been accused of conversion for holding a routine Sunday prayer meeting.

Father James Panavelil, an assistant vicar of St. George Church, told DW that he believes the attacks are not random and that there is a clear political agenda to divide the people on the basis of religion, using conversion as a decoy for a far more sinister ploy.

"Assembly elections are around the corner," Panavelil said. "We are seeing the political class moving on their dream of making India a Hindu nation. Where would the Christians and Muslims be then?"

The normalization of the violence has been troubling for Christians, who are increasingly feeling the burn of Hindu nationalism.

"No religious followers or their buildings should be attacked or ransacked by any religious fundamentalists. If followers deviate from their faith to other tracks like forcible conversion, it should be challenged in the court," Sister Jesme told DW.

Jesme, who quit the Catholic Church over a decade ago after weighing in on nuns' exploitation in Kerala, said many "fundamentalists were being given a free run."

A Berlin pastor takes a stand

"Christian priests visit interior villages and areas in Gujarat and convert tribal Hindus. Those who got recently converted are relatives of those who were earlier converted to Christianity," said Piyush Shah, a Vishwa Hindu Parishad leader.

In 2008, the country witnessed its worst violence against Christians in the Kandhamal region of eastern Odisha by Hindu hard-liners. More than 600 villages were ransacked, 5,600 houses were looted and burnt, and 54,000 people were left homeless, according to the National People's Tribunal.

The recent attacks are occurring despite a clause in the country's constitution that guarantees the freedom to openly practice any religion.

Why is India-administered Kashmir facing a power shortage?

Kashmir's subzero temperatures in winter and a dearth of electricity are a painful mixture for locals. With a vast capacity to produce hydropower, why is so little electricity available?

Ambassador Walter J Lindner's visit to the headquarters of the Rashtriya Swayamsevak Sangh has stirred a controversy in India. Experts say the Hindu extremist group glorifies Adolf Hitler and his "cultural nationalism."

Are India's emergency visas for Afghans issued based on religion?

India's past citizenship policy, which critics say excludes Muslims, has raised questions as to who is eligible for special new humanitarian visas for Afghan refugees fleeing the Taliban.

Three journalists have allegedly been killed for reporting on corruption in the Indian states of Bihar and Madhya Pradesh. Their deaths underline dangers faced by journalists in the country. Murali Krishnan reports.

As she celebrates her birthday on November 24, the Booker Prize-winning novelist and prolific essayist has proven that politics and fiction go hand in hand.

Indian authorities have moved cautiously to recover the body of an American missionary supposedly killed by an isolated tribe. Tribe advocates believe that continuing their search could harm the indigenous people.

The 76-year-old had 39 wives and 94 children. The head of a Christian sect that practices polygamy, he and his family lived in a four-story house with 100 rooms.

Space for political satire is diminishing in India as authorities crack down on stand-up comedians who are taking political swipes and speaking truth to power.