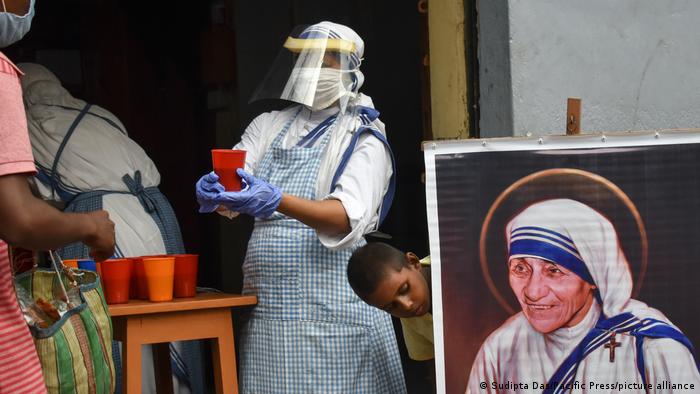 The Missionaries of Charity (MoC), an organization started by Mother Teresa,  has had its access to foreign funding cut by India's government.

The Home Ministry said in a statement on Monday that the charity's application for renewing a license that enabled it to receive donations from abroad had been rejected.

"While considering the MoC's renewal application, some adverse inputs were noticed," the Home Ministry said, without providing further details.

On Monday the chief minister of West Bengal state, Mamata Banerjee, wrote on Twitter that the government had in fact frozen the charity's bank accounts.

"Shocked to hear that on Christmas, Union Ministry froze all bank accounts of Mother Teresa's Missionaries of Charity in India! Their 22,000 patients and employees have been left without food and medicines," wrote Banerjee, who represents a secular opposition party.

The federal government in New Delhi swiftly denied having frozen the accounts, and this was later confirmed by the charity.

The MoC did, however, say that its Foreign Contribution Regulation Act renewal application had been rejected.

The charity has thousands of nuns working in more than 600 missions, which include hospices, schools and homes for abandoned children, among other operations.

The charity found itself at the center of an investigation earlier this month over allegations that young girls in the state of Gujarat had been forced to read the Bible and recite prayers.

That is despite the organization stating that it provides services regardless of religious affiliation. The MoC has denied the allegations.

There has been criticism of growing religious intolerance under the Hindu nationalist leadership of Narendra Modi and a rise in attacks targeting minorities.

Muslims have also been targeted. Last week police in northern India said they were investigating an event in which Hindu religious leaders allegedly called for mass killings of Muslims. Videos of the event in the city of Haridwar in Uttarakhand went viral.

Albanian-born nun and missionary Mother Teresa founded the Missionaries of Charity in 1950; she had made the organization world-famous by the time of her death in 1997 and was best known for her work in West Bengal's capital, Kolkata. The Catholic Church, which canonized her in 2016, refers to her as Saint Teresa of Calcutta, as the city was formerly known internationally.