Christians Under Attack in India 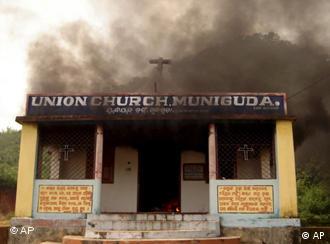 Smoke rises from a church torched by hardline Hindus in Muniguda in India's Orissa state on Aug. 26, 2008

Several churches and homes of Christians have been attacked, forcing thousands to take refuge in temporary camps.

On Tuesday, police say hundreds of mobs set fire to a police station in Kandhamal district in the eastern state of Orissa, killing one policeman. This brings the death toll to almost 22 in the Hindu-Christian clashes in the state.

The trouble started after the killing of a Hindu leader three weeks ago. Though some Maoists rebels claimed responsibility for the killing, Hindu hardliners blame the Christians for the death.

Violence has also spread to southern India, where at least 20 churches have been damaged in recent days by hardline Hindus.

They accuse Christian priests of bribing poor tribes and lower-caste Hindus or Dalits to change their faith, while Christians say Dalits convert voluntarily to escape discrimination in the Hindu caste system.

The 25-year-old was reportedly upset that his friend who had no prior military experience had received draft orders. The shooting follows Russian President Vladimir Putin's announcement of partial mobilization.