Ambassador Walter J Lindner's visit to the headquarters of the Rashtriya Swayamsevak Sangh has stirred a controversy in India. Experts say the Hindu extremist group glorifies Adolf Hitler and his "cultural nationalism." 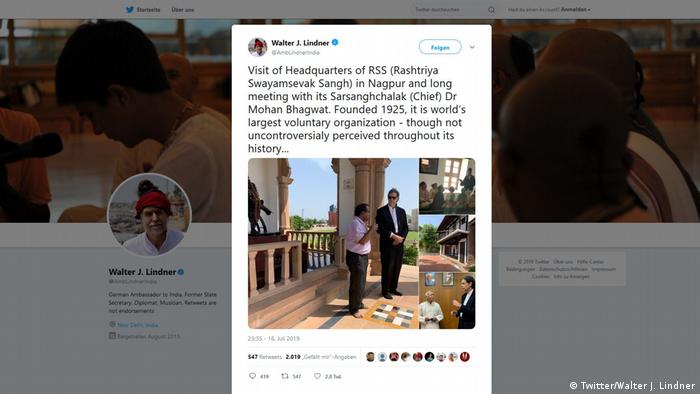 "Visit of Headquarters of RSS (Rashtriya Swayamsevak Sangh) in Nagpur and long meeting with its Sarsanghchalak (chief) Dr Mohan Bhagwat. Founded 1925, it is world's largest voluntary organization – though not un-controversially perceived throughout its history..." Walter J. Lindner, Germany's ambassador to India, wrote on Twitter last week.

Little did Lindner know that his visit to one of India's most controversial Hindu extremist groups would trigger a huge backlash on social media, with liberal analysts, journalists and political commentators slamming his RSS outreach.

"The RSS has never made any secret of its love for Adolf Hitler. Both its first Sarsanghchalak [head], MS Golwalkar, and one of the organization's heroes, VD Savarkar, were admirers of Hitler, mainly for his 'cultural nationalism' and his persecution of the Jews," said Sidharth Bhatia, the Mumbai-based founding editor of The Wire news portal.

The RSS is a Hindu umbrella group which is the ideological inspiration for Prime Minister Narendra Modi's rightwing Bharatiya Janata Party (BJP).

RSS, which presents itself as a cultural organization, advocates a Hindu nationalistic agenda under the banner of "Hindutva" or "Hinduness."

Founded in 1925, the RSS today boasts 6 million active members. Most of the BJP's leaders, including Modi, have a long history as members of the volunteer movement.

"The RSS has never praised Hitler or Nazism… In fact, the RSS is the biggest pro-democracy force in the country," Arun Anand, the CEO of Indraprastha Vishwa Samvad Kendra, an RSS-affiliated media think tank based in New Delhi, told DW via email.

The petition alleges that Lindner's visit to the RSS headquarters "condones" the group's ideology, which is "inspired by fascist movements."

"His visit condones the RSS paramilitary as well as its ideological and institutional inspiration by European fascist movements like those of Hitler's Germany and Mussolini's Italy," the petition read.

The petition sought an intervention from German Chancellor Angela Merkel and Foreign Minister Heiko Maas in the matter.

"We, the undersigned, demand that Ambassador Walter Lindner resign or, failing that, be recalled. We demand immediate intervention by Chancellor Angela Merkel and Foreign Minister Heiko Maas to achieve this goal," it said.

Defending his visit, Lindner said that as a German he was conscious of RSS's history during the 1930s-40s.

In an interview with The Hindu newspaper on Saturday, the ambassador said his visit to the RSS headquarters was part of his attempt to understand the "Indian mosaic."

He also said that he visited Nagpur city to review progress of a German-funded Metro project.

"I went to educate myself about the organization," said Lindner. "I had read very negative and very positive articles about it, everything from its social engagement to accusations of fascism, and I wanted to make my own impression. So I asked Mr. Bhagwat many questions," Lindner told the newspaper.

Lindner's visit was considered unusual as very few foreign diplomats have engaged with the RSS in public.

"This visit sets a wrong precedent, especially because social intolerance is on the rise in India," Sanjay Srivastava, a sociologist at the Institute of Economic Growth in New Delhi, told DW.

But Anand, the CEO of an RSS-affiliated media think tank, says that "a number of ambassadors from various countries have met the RSS chief in the past."

"Last year, many diplomats attended a three-day talk given by the RSS Chief in New Delhi. The talk was followed by meeting between the RSS Chief and the diplomats," he pointed out.

"It [the visit] sends a chilling message to India's minorities. The global rise of neo-Nazism, especially its attempts to align with the RSS to promote violent supremacist goals, poses a dire threat to the peace and harmony of the whole world," Arvin Valmuci of the Organization for Minorities of India (OFMI) said in a press release.

But Lalit Mansingh, India's former foreign secretary, came out in Lindner's defense and said that a diplomat can reach out to "as many people" he wants.

"I think it is part of his (Lindner's) diplomatic duty to reach out to people. Are there any restrictions on meeting RSS officials? It's not a banned organization," Mansingh told DW.

"Indian diplomats can also meet with chiefs of any far-right political party in the West as long as there are no restrictions [on such meetings]," he added.

Germany is India's most important trading partner in the European Union and the two countries enjoy cordial diplomatic relations.