A state law in Uttar Pradesh was coined to accuse Muslim men of converting Hindu women to Islam through marriage. Critics have slammed the "love jihad" law as Islamophobic. 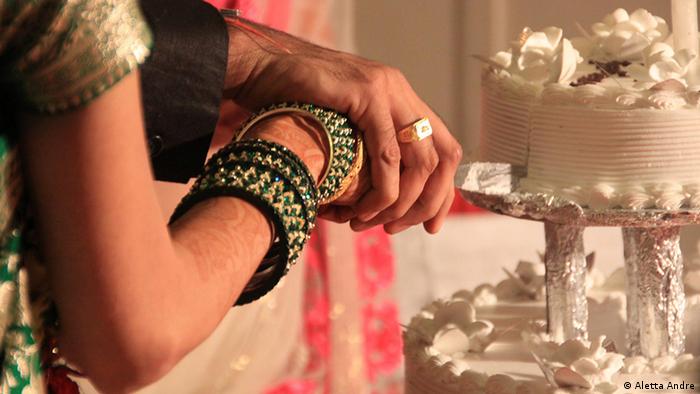 Police in India's Uttar Pradesh state have arrested a Muslim man for allegedly trying to convert a Hindu woman to Islam. It is the first under the state's new anti-conversion law targeting "love jihad."

The term "love jihad," which critics have slammed as being Islamophobic, was coined to accuse Muslim men of converting Hindu women by marrying them.

Bareilly district police confirmed the arrest on Twitter, after the man was "accused of pressuring conversion, arrested and sent to jail."

The woman's father first filed a complaint, accusing the 21-year-old Muslim man of pressuring his daughter to convert and threatening her life if she didn't. The woman was allegedly in a relationship with the man but was married to someone else earlier this year.

The man was sentenced to 14 days in judicial custody, according to online newspaper ThePrint.He also claimed to have no connection to the Hindu woman. "I have no link with the woman, she got married a year back. I am innocent," he said.

In the father's complaint, he alleged that the man had known his daughter since they were students, and had been pressuring her to convert. A police officer told ThePrint that the two had planned to elope in October of last year, but were unable to do so.

Alleged offenders risk a jail term of up to 10 years, while offenses committed under the law are non-bailable.  At least four other states are drafting laws against "love jihad," according to The Quint. The law draws on a conspiracy theory that a large number of Muslim men are feigning love for the purpose of converting women to Islam.

The home minister of Madhya Pradesh state, just south of Delhi, earlier said that the state will consider marriages taking place out of fraud or by "tempting someone" null and void. Other states considering "Love Jihad" laws include Haryana, Karnataka and Assam.

Tensions run high between the Hindu majority and Muslim minority in India and have sparked several riots and violent conflicts between the two groups. Earlier this year in Delhi, dozens died when protests and clashes broke out between Hindus and Muslims over a controversial citizenship law.

The law, introduced by the government led by the Hindu nationalist Bharatiya Janata Party (BJP), offers amnesty to non-Muslim illegal immigrants from Pakistan, Bangladesh and Afghanistan.

Critics said the bill was part of a BJP effort to marginalize Muslim citizens.

In just one week, lightning strikes have killed nearly 50 people in the Indian state of Uttar Pradesh. Most of the victims have been farmers caught without shelter in the drenching monsoon rains. Experts say it's due to climate change.

The Indian state of Uttar Pradesh has held elections amidst massive unemployment and deep unhappiness with the ruling party. The state is often a harbinger of national trends, so all eyes in India are on the outcome. DW's Nimisha Jaiswal reports.