India: Interfaith couples suffer amid a growing religious divide | Asia | An in-depth look at news from across the continent | DW | 03.11.2020

A jewelry advertisement in India showing a Hindu woman married into a Muslim family led to a fierce backlash from right-wing groups. But what is it like for a real interfaith couple amid rising intolerance? 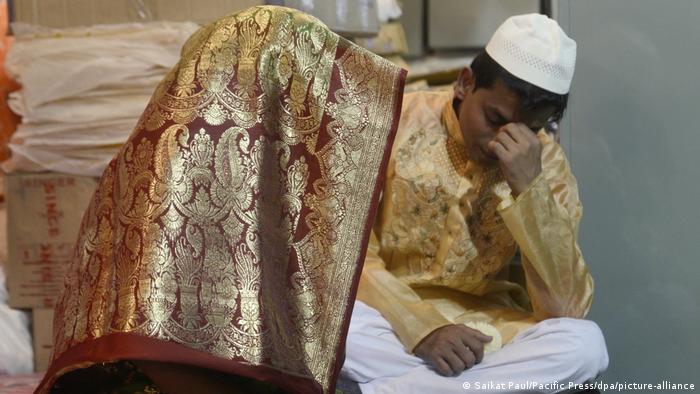 Sadaf has not had a proper conversation with her father for about three years now. He just wouldn't talk to her. That is the price she had to pay for choosing to marry a non-Muslim. The New Delhi-based lawyer still visits her parents' home in the northern Indian city of Lucknow, in the hope that her father will eventually come around and accept her Hindu husband.

Interfaith marriages are often contentious in Indian society, especially when it involves a Hindu and a Muslim. This was recently seen when a jewelry advertisement featuring an interfaith couple sparked an outrage so intense that the brand, owned by one of the largest conglomerates in India, withdrew the ad.

The jewelry brand said in a statement that its decision to take down the ad was made "keeping in mind the hurt sentiments and the well-being of our employees, partners, and store staff."

The controversy — not the first of its kind — once again brought into question the tolerance and acceptability of interfaith marriages in a country where religious tensions have been on the rise in recent years. 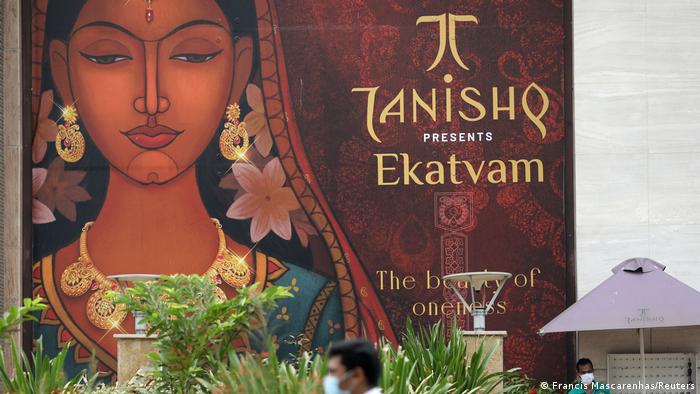 A jewelry advertisement featuring an interfaith couple sparked an outrage so intense that the brand Tanishq, owned by one of India's largest conglomerates, was forced to withdraw the ad

Sadaf married her colleague and fellow lawyer, Yatin, in February 2018. But the months preceding their wedding weren't easy for either of them.

"It was particularly difficult from my side," Sadaf said. "It's always more difficult for the woman's family to come around," she said.

Marriages in India's patriarchal system see women as being "given away" by their families. "Most families are reluctant to 'give away' their daughter into a faith they do not understand," Sadaf told DW.

While this wasn't something Yatin had to worry about, he faced challenges of his own. "My family went into absolute shock when I first told them about Sadaf," he said.

"In fact, my mother had casually told me sometime earlier that they would accept whomever I wanted to marry, except a Muslim," Yatin said.

After several months of persuasion, his family finally agreed. But he admits that in interfaith marriages, the brunt of the backlash is often faced by women.

"If it were my sister who wanted to get married to a Muslim guy, I don't think my parents would have agreed to it," he said. "The woman's side often gets very aggressive too."

Fortunately for Sadaf, the reaction from her community was limited to a social boycott.

Only her mother, who was quite supportive from the start, and her brother attended the wedding. Sadaf's father refused to be part of the ceremony.

Unlike many inter-religious couples in India, Sadaf and Yatin had a lot going for them. They both came from educated families that were not prone to violence, lived in urban centers, and were financially independent. But most importantly, Yatin was a Hindu.

"Had Yatin been a Muslim, and I a Hindu, our marriage would have been called 'love jihad,'" Sadaf said.

"Love jihad" is a conspiracy theory floated by far-right Hindu groups in India, which accuse Muslim men of trying to convert Hindu women to Islam by marrying them.

"The concept of 'love jihad' has really become widespread now," Sadaf said, adding that the current political environment has only fueled such conspiracy theories.

Sadaf said they had kept their wedding low-key out of fear that one of these groups might show up.

"We were quite scared. We didn't know who might just come and disrupt the wedding," she said.

"It could be just any party wanting to make it political," Sadaf said, adding that the situation has only got worse with time. "If we were getting married now, it would be a lot more difficult."

Hindu-Muslim marriages have never been socially acceptable in India, but only recently has it become a political issue, drawing the attention of what were earlier considered to be fringe groups.

According to social activist Asif Iqbal, interfaith couples have become more careful now, so as to avoid allegations of religious conversions.

"Earlier when people from two different faiths got married, it was considered a private matter of their respective families," Iqbal told DW. "There was little political intervention in the matter. All that has changed now."

Iqbal is the co-founder of Dhanak, an NGO in New Delhi that provides interfaith and inter-caste couples counseling as well as legal and financial aid.

Founded in 2010, his organization helps about 1,000 couples every year, half of whom are interfaith couples.

"The people that reach out to us are mostly those who fear that either during or after their wedding, there would be violence," Iqbal said.

"There are also different kinds of violence. In some cases, the couple is beaten up, while in others, they are locked up at home, cutting off all communications with the outside world," he said.

"What we do is make these couples aware of their rights. We tell them that there is nothing wrong with what they're doing, either legally or morally," Iqbal said. "Once they become confident, it becomes easier for them to handle the situation."

While there are many couples who make it together against all odds, the social stigma is still prevalent in India. It mainly stems from the state of Hindu-Muslim relations which, Iqbal says, have always been somewhat strained.

"People have lived in harmony too, but when there are two religions within one family, it becomes a controversial issue. It has always been this way," he said.

Iqbal added that it's not just the conservative Hindu groups that cause all the trouble.

"Their outrage seems intense and attracts attention because they have the political space to do that right now. I believe if conservative Muslim groups were given the same political space, they too would be reacting the same way," he said.

"Nobody can instigate one group against the other that easily. The bias has always existed in people's minds," Iqbal said. "It has just been inflamed in the current political environment."

The Rashtriya Swayamsevak Sangh (RSS) is the ideological mentor to Prime Minister Narendra Modi's BJP party. It is increasingly playing an influential role both inside and outside government. Murali Krishnan reports.