What′s behind Russia′s disinformation campaign in Georgia? | Europe | News and current affairs from around the continent | DW | 24.11.2020 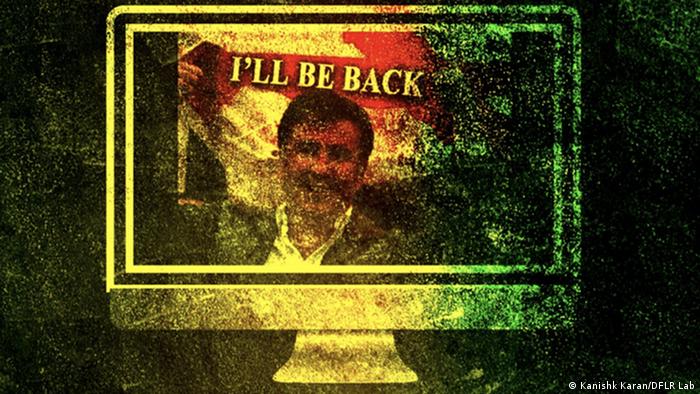 Logging onto their computers in the morning just over a year ago, civil servants and NGO fact-checkers saw an unlikely sight. Over 15,000 Georgian websites had been hacked to display a photo of the disgraced former Georgian President Mikhail Saakashvili with a message: "I'll be back."

The Georgian Foreign Ministry blamed Russia for the cyberattack, likening it to hacks from the August 2008 war.

Russian disinformation campaigns are seen by security experts as following a "4D model:" dismiss the critic, distort the facts, distract from the main issue and dismay the audience.

Russia occupies a fifth of Georgia's land through the proxy states of Abkhazia and South Ossetia. Russia and Georgia may share history and Orthodox Christianity, but since the Rose Revolution in 2003 Georgia has pursued a pro-Western foreign policy, signing an EU Association Agreement and aspiring to join NATO, a policy supported by 75% of the population.

But the Kremlin has still tried to achieve its strategic goals the best way it can: through disinformation, targeting Georgia's neighbors or partners and promoting extremist groups within Georgian society. 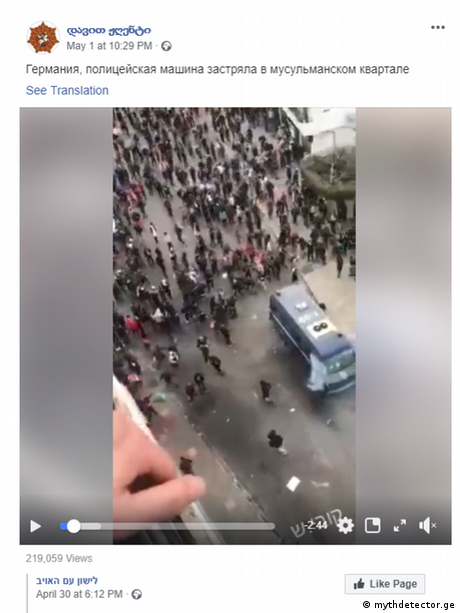 Russia's goal, according to Batu Kutelia, the deputy chairman of the Atlantic Council of Georgia, is "to prove that liberal democracy is impossible to have." Rather than simply promoting pro-Russian propaganda, the goal is to make multicultural Western countries look weak and therefore less attractive partners for Georgia.

European countries, particularly those with large immigrant or refugee populations, are portrayed through fake news as violent and lawless. A video of protesters in Algeria shared on Georgian Facebook was titled in Russian "Germany: Police got stuck in the Muslim Quarter."

Another example came in September, with a faked letter from the European Commission thanking the Georgian president for hosting a non-existent refugee camp.

Sowing the seeds of doubt

The tactic of taking images and videos out of context, often to vilify Muslims and migrants, is common. Another post from a Facebook page calling itself You Are Georgia showed badly beaten women, claiming they were British victims of violence by migrants. But reverse image searches established that none of the women portrayed had been attacked by migrants; most of them were victims of domestic violence.

How does Russia get stories like this out there? Election monitors of the NGO International Society for Fair Elections and Democracy (ISFED) discovered a coordinated network of 11 disguised Facebook pages with 762,832 subscribers. Most of them shared seemingly-harmless "clickbait" content about animals or personality quizzes, but which ISFED say "aim to cultivate trust of citizens toward Kremlin-supported news agencies, to lower their guard, or collect their information."

Sputnik articles were also regularly shared by a network of 26 anonymous accounts in local Facebook groups.

The Kremlin does not just broadcast fake news into Georgia, it also supports local Georgian groups who further their interests. The largest nationalist anti-liberal groups Georgian March and the Alliance of Patriots have Facebook pages administrated from within Russia, according to ISFED research. An investigation by the London-based Dossier Center alleges that the Alliance of Patriots, which openly promotes rapprochement with Russia, received $8 million (€6.7 million) in electoral funding directly from Moscow. The former Georgian ambassador to the United States, Vasil Sikarulidze, told DW that Russia has a long history of "capitalizing on already existing differences within society," which is easierto take advantage of in a young democracy like Georgia. 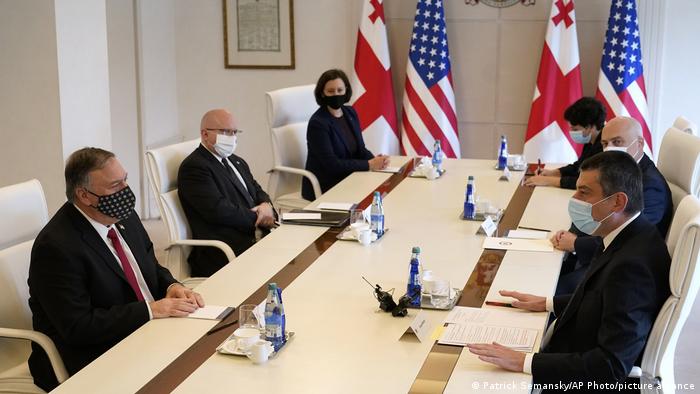 These groups create a narrative that Georgia's other neighbors are causing problems, inciting Islamophobia, xenophobia and anti-Turkish sentiment, particularly in the border region of Adjara. A billboard put up by the Alliance of Patriots implied that the region was soon to be under Turkish occupation. Outcry from across the political spectrum and a legal challenge led to the billboard being taken down.

Fake news was also spread that Georgians in Istanbul had been attacked by Turkish nationalists. Using open-source intelligence, the Atlantic Council's researchers geo-located the street shown in the article and confirmed no Georgians had been involved in an attack. The disinformation was traced back to a Georgian March activist.

So what drives Russia's attack on democracy? According to the Atlantic Council's Batu Kutelia, the "Russian authoritarian state thinks it has an advantage over liberal democracy — autocracies are more stable so they are able to do more long-term planning."

The best way to defend against information warfare, he said, is by "strengthening emerging democracies."

Tamar Kintsurashivili has long been involved with media development projects in Georgia. She discusses disinformation issues and explains how fact-checking and Media and Information Literacy work together.