US, China, India take on OPEC+ by releasing oil reserves | Business | Economy and finance news from a German perspective | DW | 24.11.2021

US, China, India take on OPEC+ by releasing oil reserves

After being spurned by OPEC+ for months, major consumers led by the US have come together to tame oil prices. The move is a setback to the oil cartel's hegemony over the global oil market. 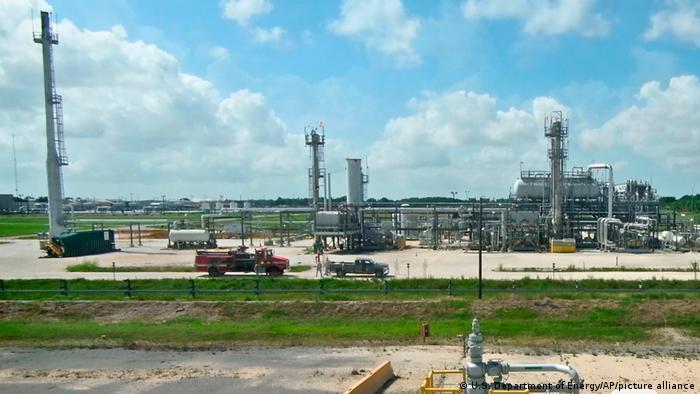 Six countries-led by the US may release 71.5 million barrels of oil from their reserves, according to Rystad Energy

In an unprecedented move, the United States, the world's biggest oil consumer, has decided to release millions of barrels of oilfrom its strategic reserve to rein in soaring energy prices. Washington made the move in tandem with other major oil consumers China, India, Japan, the UK and South Korea.

The US announcement came after OPEC+, an alliance between the Saudi Arabia-led Organization of the Petroleum Exporting Countries (OPEC) and a handful of Russia-led oil producers, rebuffed several calls by US President Joe Biden as well as Beijing and New Delhi to pump more oil.

Oil prices have climbed more than 50% so far this year as demand for fuel soars amid a swift economic rebound from pandemic lows. The high prices have further stoked inflation worries, which are already weighing on the post-pandemic global economic recovery.

Louise Dickson, senior oil markets analyst at Rystad Energy, said the US action marked an "official emergence of an 'anti-OPEC+,' a group of top oil-consuming countries that are taking the supply-side dynamics into their own hands in the unconventional and unprecedented release of strategic petroleum reserves (SPR)."

"[The] historic but very unorthodox move is a clear message to OPEC+ that it's not the only actor on the global oil market stage," Dickson said in an email statement.

Will releasing oil from reserves make a difference?

OPEC+ likely to fire back

The coordinated action however failed to cool the market, with oil prices rising to a one-week high on Wednesday as the scale of the release fell short of expectations and traders braced for a response from the OPEC+ when its members meet next week.

"The US-driven coordinated SPR release disappointed and reminded energy traders that OPEC+ still runs the show," Edward Moya, senior market analyst at OANDA, told DW. "The benefit from the SPR release was mostly priced in and now the oil market can trade on the deficit that firmly remains," he said.

Brent crude prices have dropped 10% drop from their recent peak in October, partly following reports of Biden's diplomatic efforts to get major oil consumers to agree to a coordinated release.

OPEC+ delegates have warned that they could reassess their plans to gradually boost oil production when they meet on December 2 in response to the US-led move, Bloomberg News reported.

The cartel, sitting on millions of barrels per day of spare production capacity, has been resisting calls to boost output beyond the 400,000 barrels per day that it has been adding to the market every month to cater to the soaring demand. Justifying their cautious approach, the members point to the uncertainty around the still raging pandemic, which has led to fresh lockdowns in some countries in Europe.

"The coming OPEC+ meeting is to be watched closely as it could offer an interesting supply poker game ahead," Bjornar Tonhaugen, head of oil markets at Rystad Energy said. "If the move is seen as aggressive by OPEC+, the group could in theory even cut back supply into January to maintain its profits."

"It shows that all is not well — rather complicated in energy markets today," Jonathan Elkind, former assistant secretary for international affairs at the US Department of Energy, told DW.

"There are complicated dynamics between Washington and Riyadh, but first and foremost, this move is not about Washington and Riyadh. This is about how do you move out of a pandemic that is still very much in force in some countries and yet you see the economic recovery happening in others."

The United States has in the past coordinated the release of oil reserves with the Paris-based International Energy Agency (IEA), an autonomous organization made up of 30 member countries. The last such effort was in 2011 during the Libya crisis when 60 million barrels were released.

It is the first time that China, which is only an associate member of the IEA, is part of a coordinated release.

China is the world's largest oil importer and has already tapped its reserves several times this year to rein in domestic oil prices, but Beijing has yet to make any concrete announcement related to the US-coordinated release.

A Chinese Foreign Ministry spokesman said on Wednesday Beijing would release crude oil from its reserves according to its needs.

"As a result, the Biden administration will have to turn to China again. This is a direction that benefits everyone, but China clearly has the upper hand," China's state-backed Global Times said.

With input from Reuters news agency.