US and Russia push rival UN resolutions on Venezuela

The US is pushing the UN Security Council to call for fresh presidential elections in Venezuela. Russia has proposed an alternative draft, which shows concern over outside interference in the nation's internal affairs. 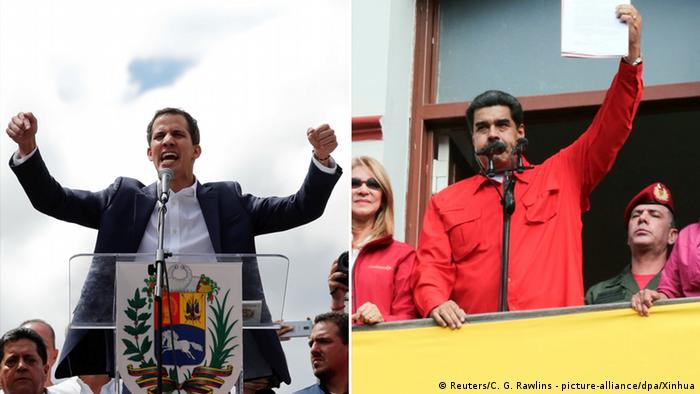 The US move has prompted Russia to propose a rival resolution, essentially raising concerns over outside interference in Venezuela's internal affairs.

More than 40 nations, including the US, major European powers, including Germany, and most of Latin America have recognized Guaido as the country's interim head of state.

The US-drafted resolution, which was discussed privately on Friday by diplomats from the 15 Security Council members, expresses "full support for the National Assembly as the only democratically elected institution in Venezuela."

It also "calls for the immediate start of a political process leading to free, fair and credible presidential elections, with international electoral observation, in line with Venezuela's constitution."

The draft resolution expresses concern over "violence and excessive use of force by Venezuelan security forces against unarmed, peaceful protesters."

During discussions on the draft resolution, Russia — which has accused Washington of backing a coup attempt in Venezuela — proposed an alternative text, diplomats said.

US President Donald Trump has not ruled out a military intervention in the Latin American country.

It was unclear if or when either draft Security Council resolution could be put to a vote.

The US draft resolution is pushing the Security Council to facilitate the delivery of humanitarian aid to Venezuela. Washington has accused Maduro of blocking its shipments of food and medicines for the Venezuelans.

Earlier this week, Maduro ridiculed the US for offering small amounts of assistance while maintaining sanctions that block billions of offshore assets and revenue.

Maduro blames US sanctions for his country's economic woes. Venezuela is struggling with hunger, preventable diseases and hyperinflation.

How long can Maduro hold on?

Three million people have fled hunger, poverty and political repression in Venezuela under President Nicolas Maduro. Why should he stay on as leader? DW meets the Venezuelan Ambassador to the EU, Claudia Salerno Caldera. (06.02.2019)

Venezuela's socialist rulers have lived well off the nation's oil industry for many years. But planned US sanctions could call time on Nicolas Maduro's rule and stop the flow of foreign currency. (01.02.2019)