How long can Maduro hold on?

Three million people have fled hunger, poverty and political repression in Venezuela under President Nicolas Maduro. Why should he stay on as leader? DW meets the Venezuelan Ambassador to the EU, Claudia Salerno Caldera.

After being reelected in a vote widely criticized as undemocratic, Venezuela's President Nicolas Maduro is defiant while a growing number of nations call for a free and fair presidential election.

In an exclusive Conflict Zone interview with the Venezuelan Ambassador to the EU, Claudia Salerno Caldera, host Tim Sebastian asked her how long Maduro could hold on as leader. 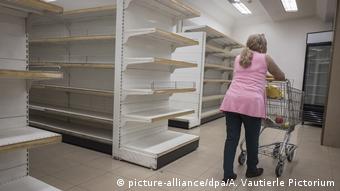 Venezuela's devastated economy has caused food shortages. Its citizens reportedly lost an average of 24 pounds in bodyweight in 2017

"Six years I hope, because that is what the people voted for," said the ambassador.

Challenged with reports of defections by senior military and diplomatic figures over Maduro's leadership, Salerno Caldera said it would not affect Maduro's tenure, and their opinions "doesn't make democracy."

Many EU nations, including Germany, France, Spain, and the U.K., as well as the European Parliament, have joined the U.S. in recognizing opposition politician Juan Guaido as Venezuela's interim leader.

"A president … doesn't hold on because foreign countries ask them, or like them or not," said the Venezuelan diplomat. 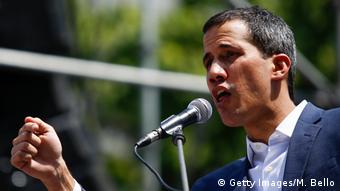 Italy reportedly blocked a joint EU statement supporting Guaido, and Ireland has also chosen not to endorse him, while Maduro retains the support of the country's military and a powerful international bloc including China, Russia and Turkey.

Confronting Salerno Caldera with recent reports of alleged killings by police forces, Tim Sebastian asked why the president should stay in office if this was how he treated his people.

"If these are crimes that are being committed, it's not the president … that is doing it. The penal responsibilities are direct and personal."

Were these killings a warning from the government to the families and communities who had witnessed them?

"That is your interpretation of things," she said. "Families always have … the institutions open to make the investigations that are required."

In September 2018, the UN Human Rights Council adopted a resolution expressing "its deepest concern at the serious human rights violations, which stem from a political, economic, social and humanitarian crisis."

Amnesty International has accused Venezuelan authorities of "using lethal force with intent to kill against the most vulnerable and socially excluded people in the country."

But Salerno Caldera denied that Venezuela had been condemned in the UN human rights council: "You have the wrong information. We presented our report last year and we came out with only 11 recommendations and all of them were fulfilled." 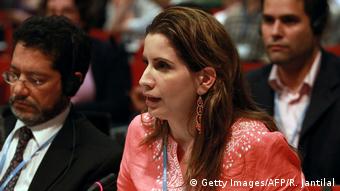 In a magazine interview, the ambassador had said that Maduro "always dealt with the critical situation with love and always with an open hand to dialogue." But were extrajudicial killings a sign of this love and open hand?

The Venezuelan diplomat questioned the veracity of the accusations and said: "He handled two very difficult situations of riots, that were very violent in the country, that were promoted by some and a few opponent parties in the country, and those riots were handled with a lot of love and patience and actually kept the country in peace afterwards."

In November 2018, the UN High Commissioner for Human Rights, Michelle Bachelet, was invited to Venezuela by Maduro and the official visit is "about to happen ... in these next few days," Salerno Caldera told Conflict Zone.

A UN spokesman said the week before this interview was recorded that a preliminary visit is required to justify the official visit, "but we're not close to this point at the moment."

According to a Venezuelan network of defense lawyers, the Penal Forum, at the end of 2018 there were more than 230 political prisoners in the country. Would more opponents of Maduro be arrested while he remained in power?

"The first thing that we need to solve with the [Penal Forum] and all the bodies that are claiming about … political prisoners is actually the concept of what it is, a political crime. I don't think that many of the people that are right now being prosecuted by the public ministry are there because of their political views but actually because of specific actions," said Salerno Caldera. 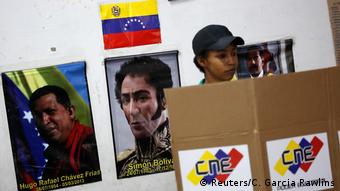 Was the refusal to accredit international observers ahead of the May 2018 presidential election evidence that the Venezuelan government planned to rig the vote?

"I can prove that in the early days of April last year even the EU was formally invited to observe and the U.N. as well," Salerno Caldera said.

Host Tim Sebastian questioned whether this was the first vote to be fixed.

The ambassador denied that the election of a National Constituent Assembly in 2017 – which critics say grabs power from the existing and opposition-dominated National Assembly and sparked massive protest – had also been fixed.

"The National Constituency Assembly doesn't have the same prerogatives as the National Assembly. They are by constitution above all the powers."

The election of the new assembly was done with international observers, said Salerno Caldera, but if "certain countries … didn't want to participate as observers you cannot claim by then that the election is not valid."

According to the Latin America and Caribbean director of the Carter Center, which had once praised the country’s electoral system, the vote "destroyed any vestiges of democracy that might have still existed in Venezuela."

There is a solid case to be made for regime change in Venezuela as advocated by the US and many of its allies. Still, scholars say, the US' record and some key Trump administration players are cause for concern. (05.02.2019)

EU foreign ministers had almost found a common position on Venezuela, but they just barely missed the opportunity to support the opposition leader. It is an infuriatingly avoidable failure, writes Barbara Wesel. (02.02.2019)