Venezuela's embattled leader Nicolas Maduro has rejected an ultimatum from European countries to call elections. The move clears the way for seven EU countries to recognize his rival Juan Guaido as president. 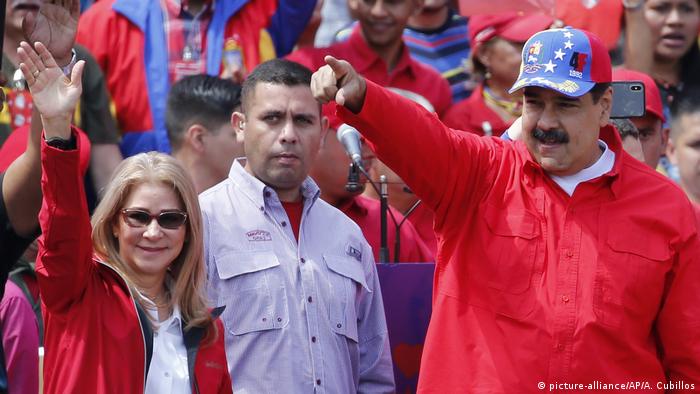 In an interview with Spanish TV network Sexta, he said he would not "cave in to pressure" by those urging him to step down.

"Why does the European Union have to tell a country in the world that has already had elections that it has to repeat its presidential elections, because they were not won by their right-wing allies," Maduro said.

Several EU countries, including Germany, France, Britain and Spain had been urging Maduro to call for new elections before midnight on Sunday.

"They are trying to corner us with ultimatums to force us into an extreme situation of confrontation," Maduro said.

But Maduro did say he supported plans for a meeting of Latin American and EU states in a "Contact Group" meeting in Montevideo next Thursday as it could lead to a "dialogue among Venezuelans to resolve our issues."

Portugal, the Netherlands and Belgium have said they will recognize opposition leader Juan Guaido as president if Maduro failed to announce a second vote by midnight on Sunday.

France's European affairs minister, Nathalie Loiseau, told LCI television on Sunday that "if by tonight [President] Maduro does not commit to organizing presidential elections, then France will consider Juan Guaido as legitimate to organize them in his place and we will consider him as the interim president until legitimate elections in Venezuela [take place]."

The Austrian leader also said he had a "very good phone call with President" Guaido in an English-language tweet.

Trump: Maduro wanted to meet him

Maduro has dismissed calls from the EU nations as an "impertinence," telling demonstrators at a rally on Saturday that "I am the true president of Venezuela."

Meanwhile, US President Donald Trump told American broadcaster CBS that sending the military to Venezuela is "an option."

Trump also said that Maduro had requested to meet him, but Trump "turned it down because we're very far along in the process."

In Moscow, the head of Russian Foreign Ministry department for South America said that Venezuelans should be allowed to solve the crisis themselves.

"The mission of the international community is to help them do it, without destructive meddling from abroad," diplomat Alexander Shchetinin told Zvezda broadcaster.

Maduro remained defiant on Sunday, leaving Caracas to meet the troops stationed at a naval base in the northern state of Arague.

"Today the future of Venezuela is being decided," he told the sailors amid preparations for an upcoming military drill. "Whether Venezuela is going to become another star on the gringo (American) flag or is going to continue flying its own colors with its eight stars of liberty and sovereignty."

He previously shared footage from a pro-government rally and thanked the nation for "so much love, so much care, and eternal commitment."

"We are the warriors for peace," he said on Twitter.

In an interview recorded on Friday and set to be broadcast on Sunday, Maduro also said people in factories, universities and other areas were preparing for combat.

"We simply live in our country and ask that nobody intervene in its internal affairs. And we are preparing ourselves to defend our country," he told the Spanish La Sexta broadcaster.

EU to talk Venezuela in Uruguay

EU foreign ministers remain cautious about setting precedents for other opposition figures across the world, deciding each state within the 28-nation bloc would adopt its own stance on whether to recognize Guaido, or not. However, the bloc is involved into a newly created "International Contact Group" on Venezuela which consists of European and Latin American countries.

On Sunday, the EU's top diplomat, Federica Mogherini, and Uruguayan President Tabare Vazquez said that the group would hold its first ever meeting in in Montevideo on Tuesday. The meet will be attended by an EU representative and ministers of Spain, France, Germany, Italy, the Netherlands, Portugal, Sweden and the UK, as well as ministers from Bolivia, Costa Rica, Ecuador and Uruguay.

The group's goal is to help "create conditions for a political and peaceful process to emerge, enabling Venezuelans to determine their own future" through elections.

On Saturday, rival mass rallies took place in Caracas with Maduro suggesting instead he would call an early parliamentary election, while Guaido presaged humanitarian imports from Colombia and Brazil for sanctions-hit Venezuelans, for which US National Security Adviser John Bolton has offered transport.

Maduro has previously refused to let in aid, claiming it would precede a US-led military intervention.

In a possible sign of weakening support for Maduro, the Reuters news agency reported that riot police had let demonstrators pass and assemble in at least three cities during Saturday's rallies.

Also, Maduro faced a high-profile defection hours before the marches when air force general Francisco Yanez renounced him as a "dictator" in a video.

Yanez also asserted that "90 percent of the armed forces" were not supporting the socialist leader, adding that "the transition to democracy is imminent."

Venezuela's ambassador to Iraq, Jonathan Velasco Ramirez, also endorsed Guaido hours later in a video message of his own.

This follows another senior military officer publicly breaking with Maduro last week, as well as a short-lived uprising staged by 27 soldiers in Caracas last month.

Which sort of election?

Maduro, when proposing "early elections" Saturday, spoke of parliamentary — and not presidential elections — within the National Assembly, in which Guaido is speaker.

Guaido, who last month declared himself interim president and called for a new presidential ballot, has little control over state institutions and day-to-day governance.

The state oil firm was responsible for the "country's tragic decline," said the US treasury secretary. Washington has backed the self-declared interim president of Venezuela, throwing the country deeper into crisis. (28.01.2019)